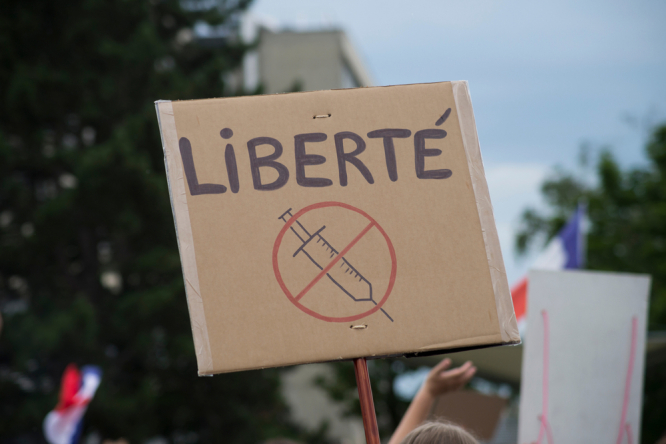 Protest slogans included “No to the dictatorship!” and “Freedom, freedom” Pic: NeydtStock / Shutterstock

Hundreds of thousands of people have protested against the extension of the health pass rules in France this weekend in the third consecutive weekend of marches.

The Interior Ministry reported 19 arrests, including 10 in Paris; and said that three law enforcement officers were injured. Tear gas was fired in place de la République after protesters threw projectiles and clashed with police.

More than 3,000 police and gendarmes were present.

On social media, posts were circulating with the hashtags #manif31juillet (protest July 31) and #PassDeLaHonte (“pass of shame”).

In Montpellier, where the gathering was almost as large as that in Paris, some protesters stormed a pharmacy testing tent in rue Maguelone, forcing workers to leave.

In response to the tent attack, MP Coralie Dubost, tweeted: “Is that ‘freedom’? Attacking those who are working and caring? Is it to injure and defame? What freedom exactly are you claiming? Hurting others is never freedom.”

In Paris, member of the gilets jaunes protest group Jérôme Rodrigues said that the marches were against “the members of the government, the members of the media, who are there to sell you the effectiveness of a vaccine, without any proof”.

One protester, a specialist educator in an addiction centre, anonymously told Le Monde: “The risk of the vaccine is greater than that if I catch Covid. I am young, in good health, and I have no underlying conditions.”

Her work requires her to have a vaccine, but she said that she would “take sick leave or use a fake health pass” to get around the rule.

Another protester, in Montpellier, told the AFP that even though she was vaccinated herself, she was marching for people’s freedom to choose whether to have the jab.

She said: “If this ultraliberal government cared about our health, it would not have sabotaged hospitals and got rid of so many beds and resources.

“We are trying to look after ill and elderly people, putting our health and sometimes our lives in danger, and during this time, the government is doing only one thing: taking away one of our freedoms.”

One restaurant worker, who said they were neither far-right politically nor anti-vaxx, and had already had one dose of the Pfizer vaccine, said: “I am a waiter, I never wanted to be a policeman. It disgusts me that they are asking us to check who is vaccinated or not, it makes my work impossible.

“This health pass is plunging people into despair.”

Interior Minister Gérald Darmanin responded to the protests in an interview with Le Parisien.

He said: “Firstly, in France, we have the freedom to protest our opinions, the right to protest against government decisions, as long as things are done within the rules of the Republic.

“From what I’ve seen, most [of these protests] are just that. We are a large democracy, in contrast to what some want you to believe, and I want to guarantee the right of everyone to protest.

“In Paris, however, I must put this into perspective. We are talking about 150,000-200,000 protesters. If I draw a parallel between that and the four million people who got a vaccination the day after the President’s speech, I can see that these protesters are not in the majority.”