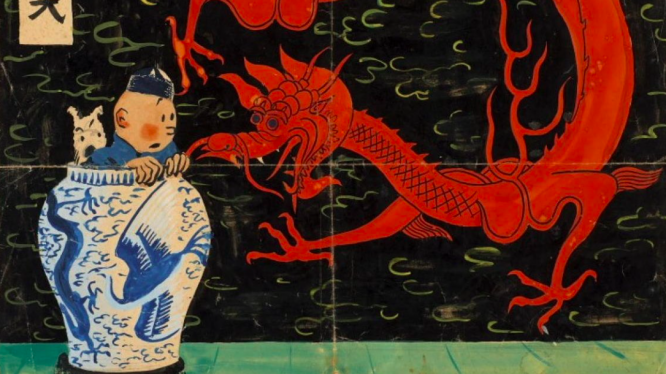 An illustration for the cover of the Blue Lotus, the fifth Tintin comic, sold yesterday for €3.175 million at auction, setting a new record for comic strip illustrations.

The cover created in 1934 by Georges Remi – better known as Hergé, the creator of Tintin – was sold by the Casterman family in Paris.

The Casterman family are heirs of Tintin publisher, Louis Casterman.

The family say the drawing was given to Mr Casterman’s 7-year-old son by Hergé, who then folded it up and kept it in a drawer for years. The image was only found decades later.

But this version of events has been contested by some experts. Philippe Goddin, professional Tintin expert said the drawing was likely folded by Hergé himself, before he sent the image to the vice-director of his publisher, Charles Lesne.

But in 2015, courts found that the copyright to Tintin had belonged to the Castermans since 1942, stripping Hergé's heirs of all rights over Tintin works.

Work considered one of Hergé’s finest

The Blue Lotus cover illustration is thought to be one of Hergé’s greatest works, but was never used as it was judged to be too detailed and expensive for printing in the comic. A simplified version was used instead.

The illustration, in Indian ink, gouache and watercolour, shows Tintin dressed in a Chinese-style costume, peeking out of a vase at a dragon.

In the Blue Lotus adventure, Tintin took on a more serious, political tone for the first time, with the story featuring both drug trafficking and the intervention of the Japanese army. Hergé became interested in China after meeting artist and life-long friend Tchang Tchong-Jen, who studied at the Royal Academy of Fine Arts in Brussels.

The piece, sold by auction house Artcurial, was expected to sell for up to €3 million, and reached €2 million within seconds at auction, before breaking the record for the most expensive comic strip artwork ever sold.

The previous record for the most expensive comic illustrations was also held by Tintin. The original ink flyleaf drawings that were used in all the Tintin adventures, and printed between 1937-58, sold in 2014 for €2.51 million.

In 2016, another Hervé artwork featuring Tintin, titled On a marché sur la lune (We walked on the moon), sold for €1.55 million.

Captain Haddock first appeared in Tintin on January 9, 1941 in The Crab with the Golden Claws.

In the stories, Captain Archibald Haddock was revealed to be a descendent of French aristocrat François de Hadoque, a sailor under Louis XIV.