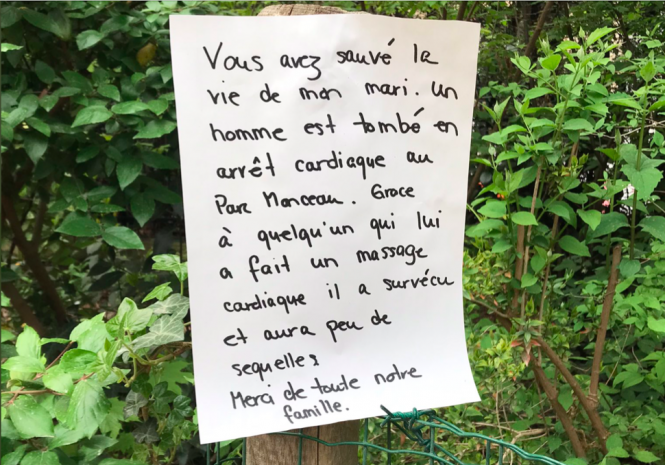 Photos of notes posted up in the park by the man's wife, looking for the woman who saved her husband, were shared on Twitter
By Joanna York

An American woman living in Paris has met the stranger who saved her husband’s life after he suffered cardiac arrest in one of the capital’s parks, thanks to Twitter.

Journalist Lori Hinnant’s husband, Peter, 53, was jogging in Parc Monceau, in the 8th arrondissement, when he fell ill on Wednesday, April 28.

Luckily a nearby stranger saw him lying on a bench in pain and was able to give first aid, providing a cardiac massage, which saved his life.

Emergency services were called, and when they arrived the helpful stranger left the scene.

Hospital staff told Ms Hinnant that less than a minute after her husband fell ill, the stranger began a 15-minute life-saving cardiac massage using a defibrillator in the park.

Ms Hinnant then set about finding the person who had saved her husband, first asking the caretaker of the park and then posting up written messages near to where the incident occurred.

The messages read: “You saved my husband’s life…Thanks to the person who gave him a cardiac massage he survived and will have few after-effects. Thank you from our whole family.”

The search went cold, until a Twitter user shared a photo of one of the messages on Saturday May 1, which went on to be shared 2,400 times.

The post quickly reached two other Twitter-users who had been at the scene.

Alizée Feauveaux, who helped the sick man in the seconds before the life-saving stranger arrived, wrote: “I am so moved to hear that your husband is okay, we have been thinking about him constantly.”

Ms Hinnant also saw the tweet, and replied to say that she had found out the stranger was a reserve firefighter. She asked the Paris Pompiers Twitter account for help identifying her.

The Paris’ Fire Brigade (brigade de sapeurs-pompiers de Paris), is a branch of the French national army. Reserve firefighters (pompiers reservistes) are not full-time firefighters but help the fire brigade with its operations on a voluntary basis.

On Sunday, the Paris fire brigade tweeted that they had identified the woman who saved Ms Hinnant’s husband as Marion, 24, a maths teacher and reserve firefighter.

Marion had just finished teaching a sports class in the park when she saw the visibly unwell man lying on a bench. She said of the incident: “I have already given cardiac massages in my role as a reserve firefighter in the past two years.

“I asked someone to bring me a defibrillator. His pulse came back, and the fire brigade arrived. Then I went home, and carried on with life.”

Ms Hinnant said on Twitter that her family were “overwhelmed” by all the Twitter users that had helped her find and thank Marion.

She wrote: “Here at least is a reasonably happy ending, and a mysterious heroine who vanished at curfew.”