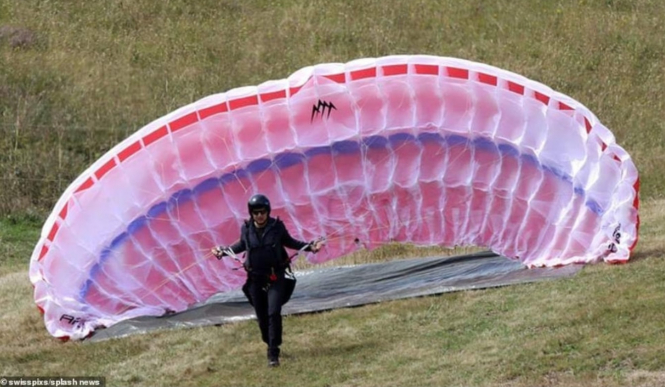 The actor is training in "speed flying", an extreme sport hybrid of paragliding and parachuting, in the French Alps
By Connexion journalist

Mr Cruise - who is known for his starring role in blockbuster films such as Top Gun, the Mission: Impossible series, Jerry Maguire, Rain Man, and many others - is training in “speedflying” jumps between the communes of Morzine and Samoëns.

Speed flying involves jumping from high mountain ledges while wearing a thin parachute, which allows the jumper to reach very high speeds in the air. It is described as a hybrid of paragliding and parachuting.

The 57-year-old - who is known for doing many of his own film stunts - is doing up to 15 jumps per day, accompanied by around 15 people, and two helicopters, according to the mayor of Samoëns, Jean-Jacques Grandcollot.

Sebastien Labie, specialist in the sport for 20 years, and member of movie stunt group la FCFC (Fédération des Cascadeurs Français du Cinéma), said: “It is really impressive that he is doing his own jumps himself, at his age.”

He added that the star appeared to be surrounded by some of the “best specialists on the planet”, and said: “All the jumps that he is doing have already been done by professionals, several times, so [Mr Cruise] will always be totally safe.

“He will feel the sensations of the jump, of course, but it’s very unlikely that they would throw an actor into an unknown jump without knowing the risks.”

It is not known how long the actor will be staying in France.

Mr Grandcollot said: “It was a huge surprise [to see him] but we are proud that he chose us. We hope that this will make him want to come back.”

The exact film for which Mr Cruise is training was not confirmed, but it may be one of his three action movies scheduled in the next three years, including Top Gun 2 (2020) and the next two instalments of Mission: Impossible (2021 and 2022).