US citizens in France cast votes on Super Tuesday 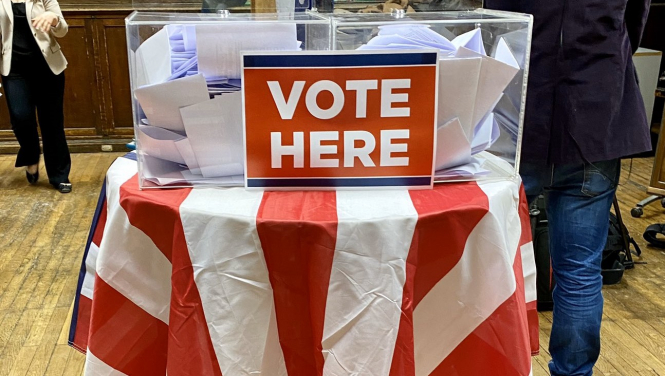 The voting was organised by Democrats Abroad France, an international group of American citizens who seek to represent Democrat voters living in France.

American voters never lose the right to vote in US elections, even if they have been living abroad for decades.

Eligible voters were given official ballots to fill in to cast their vote.

They were required to be US citizens with the right to vote, and also be members of Democrats Abroad. Same-day registration is possible on the association website or in-person.

Voting will continue until March 10. There are many polling centers and ballot assistance events planned throughout the week, in cities across France including Paris, Aix-en-Provence, Bordeaux, Lille, Marseille, Montpellier, Nantes, Nice, Rouen, Strasbourg and Toulouse.

John-Thor Dahlburg, Democrats Abroad spokesperson, who was present in Toulouse yesterday (Tuesday March 3), said that a steady flow of people had visited the site on Tuesday, and he expected similar numbers to attend on Saturday, when the events would also be open.

Speaking to local newspaper La Dépêche du Midi, he said: “If we want to participate in the civil life of our country, it is absolutely necessary to vote. The stakes are high in the United States.”

One voter and volunteer, Zev Perrett, said: “This time around, it’s especially important [to vote]. There’s a lot at stake in terms of our elections back in the US. So I feel grateful to be able to vote. To me, it seems like our vote can have more authority and more power, voting as an overseas American.”

Another voter said: “I’m glad that the organisation [Democrats Abroad] exists for people like me, who wouldn’t have a chance to vote otherwise.”

“Super Tuesday” is the name given to a day of elections - this year, on March 3 - that helps to decide who will be nominated as the Presidential candidate. It is called “Super” because so many states are holding contests, and because it offers the largest single proportion of delegates that will make up the number needed to win.

This year, 14 states and one US territory held nominating contests.

The winner is not decided by the literal number of votes, but by the number of state delegates they manage to amass in proportion to the votes cast. The first candidate to get to 1,991 pledged delegates will win the nomination.

No single individual can win the nomination alone on Super Tuesday, but a good result at this stage usually bodes well for the eventual candidate.

So far, the main struggle appears to be between former vice-president Joe Biden, and senator Bernie Sanders.

Republicans can also vote in the presidential primaries in most states, but this year much of the focus has been on the Democrats, as current Republican President Donald Trump is not expected to face a serious challenger.