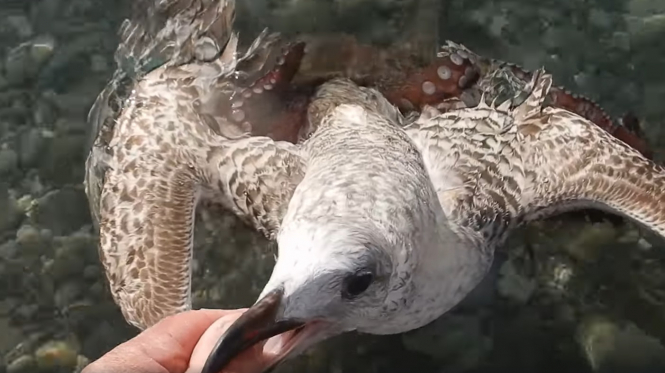 The rare sight of an octopus catching a seagull in its eight-tentacled grip has been captured on video off the southern French coast - with the man who filmed the incident managing to save the seagull in the end.

Daniel Narcy, who runs the Aquarium Flots Bleu nature and animal protection centre in Saint-Laurent-du-Var - in the Alpes-Maritimes, Provence-Alpes-Côte-d'Azur - started filming the extraordinary video when he saw that an octopus had captured a seagull from under the water.

The bird was struggling on the surface of the shallow water as a result and risked being pulled under completely.

As the video below shows, the octopus had captured the bird with its tentacles and was gripping it firmly.

Mr Narcy managed to keep the bird from being dragged away by holding on to it using its beak, and managed to free the seagull eventually - but not without first capturing the unusual tug-of-war on camera.

Posting the video to Facebook, Mr Narcy wrote: “Luckily [I] allowed the gull to fly away, leaving the ‘bad omen bird’ [the octopus] to sink back into the depths. Magical!”

In the video, Mr Narcy said: “It’s not the first time in the aquarium that we have seen octopuses catch gulls, but it is still rather extraordinary.”

He explained to local newspaper Nice Matin: "I was a bit further away and I saw some people who suddenly spread out on the beach. I thought maybe it was a fight between two dogs.

"I got closer and saw a gull, not doing well, between the tentacles of a big octopus, which must weigh more than two kilos. It is usually more common to see a gull seize an octopus, than the other way around. It was incredible."

Mr Narcy said that the gull would probably have drowned without his intervention, he added. "The octopus grip was too strong for it to be able to free itself alone."

After the bird was able to fly away, the octopus stayed near Mr Narcy and the two played a little. Octopuses are usually better known for their playful and shy - rather than predatory - temperaments.