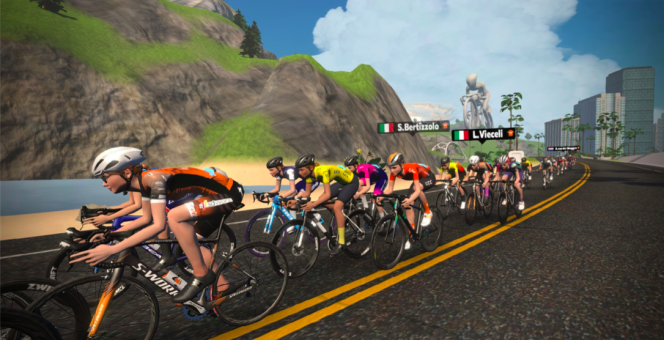 Riders in the second stage of the women's virtual Tour de France, which was won by Lauren Stephens.
By Joanna York

In the virtual event, professional cyclists compete against each other, riding on stationary bikes attached to technology that measures their output.

As they race, an avatar of each rider is simulated into a computer-generated environment, some of which resemble the real terrain they would encounter while riding in the Tour de France.

The real-life Tour de France would normally have started on June 29, but was postponed due to the Covid-19 health crisis.

The 2020 race will now go ahead in August, beginning on Saturday 29 in Nice (Provence-Alpes-Côte d'Azur).

The second stage of the virtual tour was completed on Sunday, July 5. Cyclists rode through the virtual “Watopia Mountain Route” for 29.5 km.

The mountains saw some top racing! Check out the highlights from Stage 2 of the men’s Virtual @LeTour. Next stop  , July 11th!

In the men’s virtual race, the winner of the second stage was French cyclist Julien Bernard racing for Trek - Segafredo.

Leaders in the virtual Tour de France races are awarded traditional yellow, green and polka dot jerseys for their avatars to wear.

Both male and female athletes are competing in the virtual Tour de France, while in the real-life event only male cyclists participate.

There are 23 men's teams and nine women’s teams competing in the virtual race.

Amateur cyclists can also complete their own version of the virtual Tour de France. By signing up to Zwift’s platform, they gain access to the same virtual routes the professionals have ridden in the virtual tour.

Viewers can watch the four remaining stages of the virtual Tour de France online on Zwift’s website. The race is also being televised on FranceTVSport (France), Eurosport and GNC (UK), and NBCSN (US).

The four remaining stages are:

Casse-Pattes (45.8km) begins as a flat route, followed by a climb, and a long ascent before the finish.

The La Reine route (22.9km) begins with a flat section followed by a climb through the lower slopes of Mont Ventoux (Occitanie).