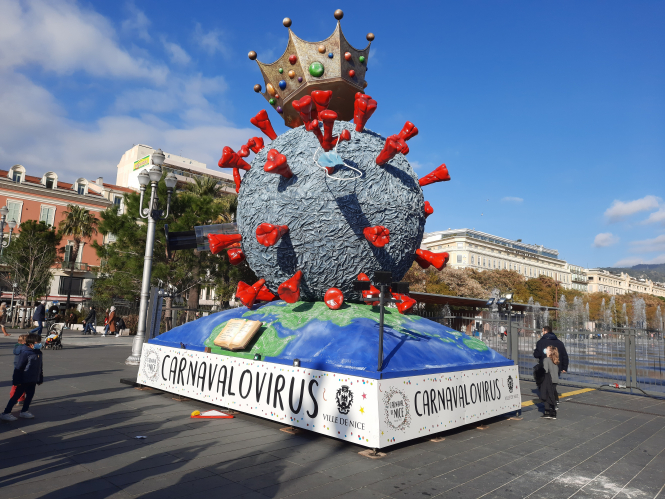 A 'Carnavalovirus' sculpture was put in Nice recently, to mark the cancellation of the carnival due to Covid
By Liv Rowland

France could be placed on the UK’s ‘red list’ – banning travel from the country – it is reported in UK media.

Most recently countries were added to this list due to a perception of increased risks of harmful new Covid variants, a problem in France – though by far the most prevalent variant here is in fact the ‘UK’ one.

It comes as a member of the AstraZeneca vaccine team, Oxford University Regius professor of medicine Sir John Bell, told The Telegraph the EU’s vaccine campaign was “hopeless” and “our biggest risk in the UK will be that the South Africa gets to us from the European continent, where there’s quite a lot of it now”.

What does it mean to be placed on the list?

Being placed on the red list would mean that only UK residents could travel to the UK from France, with a few exceptions for those working in certain professions.

It would also mean that UK residents coming from France would be obliged to undertake a 10-day period of quarantine in a government-approved hotel.

Is it officially confirmed that adding France is under review?

No, it is reported in several UK newspapers, such as The Mirror and The Independent however the source of the claim was The Times, which stated that an unnamed “government source”  told the newspaper the prospect of adding France to the list had been raised at a recent meeting of the Covid-O Committee, a cabinet committee advising the prime minister.

The source reportedly said the biggest concern was the ‘South African’ variant which The Times stated to be ‘soaring’ in France.

The minister was quoted saying: “If there is another spike in Europe and it’s at rampant levels, we don’t want to bring it back here.”

The story was picked up by several media, including The Independent, which wrote that the news “comes amid rising cases of the South African variant in France which has led to a new four-week lockdown”.

In reality, however, the latest weekly French government figures, released last week, showed that no more than 5% of cases in France in the latest study period (March 8-14) related to the South African and Brazilian variants combined, a figure which was said to have stabilised. The UK variant was said to be responsible for an increasing number of cases, at 72%.

Announcing the four-week lockdown Prime Minister Jean Castex said the current "third wave" was due to the arrival of the UK variant, adding: “We knew it was more contagious. We are slowly discovering that it is actually both more virulent and potentially more serious."

Other less well-known variants in France include a ‘Breton’ one, and a new ‘Scottish’ one.

What causes a country to be added to the list?

A spokesman for the UK’s Department for Transport said the UK’s ‘red list’ is kept under constant review and “decisions to introduce or remove countries are in direct response to the latest scientific and medical data showing an increased risk to UK public health and community transmission”.

He was unable to give details of the exact criteria used, as was the UK’s Department for Health and Social Care.

Changes were made last Friday, with the UK government stating at the time that countries were added to it linked to “new data showing an increased risk of importation of variants of concern”, meanwhile some were removed “following evidence that shows the risk of importing a variant of concern from these destinations has reduced”.

In one case, Portugal, the country was removed as it was said to have “put steps in place to mitigate the risk from its links with countries where variants have become a concern, and now has genomic surveillance in place”.

If France was to be added to the list, it would be the first European country to be added, as the list is currently mostly made up of nations from South America, the Middle-East and Africa, parts of the globe where the virus is fairly prevalent though not worse than in Europe.

Case rate statistics from the European Centre for Disease Prevention and Control show that the listed countries do not necessarily have higher rates in proportion to population size than European countries including France (and some have a much lower rates).

However they do notably include South Africa and Brazil, countries where two of the major variants were first identified.