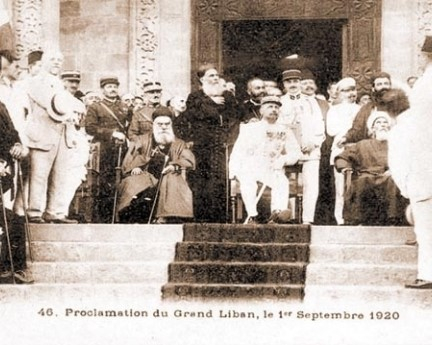 ‘Unfailingly tied’: why Lebanon and France both need each other. Uncredited, wikimedia.
By Thomas Brent

President Macron was the first world leader to visit Beirut following the huge explosion that ripped through its port, killing at least 137 people and injuring 5,000, on August 4. He later organised a United Nations conference which helped raise €250million in aid pledges. His swift response reflects France’s close relationship with Lebanon, based on history and cultural and mutual interests.

The French and the Lebanese

There are around 23,000 French people in Lebanon and around 210,000 Lebanese people in France. Although French ceased to be an official language in Lebanon in 1943, around a third of the population still speak it. It is used on bank notes and on certain signs and buildings. The country’s founding laws were all written in it. There are also many French-language schools in Lebanon.

In 2018, French ambassador to Lebanon Bruno Fou­cher said it was the number one country, outside France, teaching the French curriculum. French is the first foreign language for most pupils. During his visit, Mr Macron declared: “France will never let go of Lebanon.” He described the two nations as “unfailingly tied by the bonds of time, spirit, soul, culture, dreams”.

Some historians say that France’s relationship with Lebanon goes back to the 13th century, when King Louis IX committed himself to protecting the Maronites, an eastern branch of Catholicism which is today the largest Christian denomination in Lebanon. Others say it began in the 16th century, when François I formed an alliance with Suleiman the Magnificent, sultan of the Ottoman Empire, which controlled the territory. This gave France a role as protector of eastern Christians.

What is agreed is the significant role that French Jesuit missionaries played in bringing the two countries together. Towards the end of the 19th century, they began to create schools in the territory that would become Lebanon, and in 1875 created a famous French-speaking university that still exists; Saint Joseph University. Alex Issa, a political scientist and expert on Lebanon from Sciences Po’s Centre for International Studies in Paris, told The Connexion: “During that time, France played a big role in educating what would become the Chris­tian political elite in Lebanon.” They studied in French and learned French history.

Then came World War One and the Ottoman Empire entered the war with Germany against France and the UK. This led France and the UK to make secret plans to divide up the Empire’s territory, according to their own interests. Under the terms of the 1916 Sykes-Picot agreement, France would be given the territory that is today known as Lebanon and Syria. The UK would have southern Israel and Palestine, Jordan and southern Iraq.

When the Ottoman Empire was carved up after the war, the 1920 Treaty of Sèvres, established by the League of Nations, gave France a mandate to take control of Syria and neighbouring territories. France then took the decision to split Syria and created the independent state known as Greater Lebanon. This was first proclaimed at la Résidence des Pins in Beirut (now the French Embassy) by a French general. “France’s mandate was in between colonialism and self-determination,” Dr Issa said. “France was supposed to help Lebanon achieve independence. In reality, it was another form of colonialism.”

France created a constitution for the country in 1926 – it became known as the Lebanese Republic – and ruled the territory until 1943. “Then the Lebanese started to realise that France had come to stay,” Dr Issa said. In 1943, the Lebanese government unilaterally ended the French mandate of control with the support of international powers, including the UK and the US.

The French reacted by imprisoning government officials, including the president and prime minister. However, protests and international pressure forced France to yield power to a newly independent Lebanon. Since then, the two countries have had close relations. “Lebanese independence wasn’t violent,” Dr Issa said. “Of course, you had tensions, and officials that were imprisoned, but it wasn’t like the Algerian war. It was a peaceful transition. Lebanon has always considered France to be its tendre mère [tender mother], while Lebanon represents to France the key to the Middle East.”

The August blast destroyed a section of shoreline around the port and caused widespread damage throughout the city. The cause of the explosion has been linked to stocks of ammonium nitrate in a warehouse at the port. After the explosion, the Louvre helped organise financial support for the National Museum of Beirut, which was badly damaged.

France is also a significant exporter to, and investor in, Lebanon, and often coordinates aid to the country in international negotiations. The country is seen by France as strategically important in Middle Eastern politics. Dr Issa said the close links are important to the Lebanese.

Read more: Why France and Lebanon are such close allies

After the Beirut explosion, the “nation was desperate”, he said. “There have been demonstrations against the political elite in the country for months. There is also an economic crisis, inflation and the effects of the global pandemic.” He added: “Nothing was working for the Lebanese population. After the explosion, people were devastated, many people lost their lives, their jobs, economically it was worse. When Macron visited, he went to the streets to see the people first and not the politicians. So he gave a lot of hope to the population because they felt ‘okay there is someone here for us’.”

Some French politicians called Mr Macron’s visit “neo-colonialist”, and Dr Issa admitted it could be interpreted in that way. “When you come to a country and give a speech to the population, not all the people see it in a good way. But in the end, whether it was neo-colonialist or not, he gave hope to the Lebanese people.”

Dr Issa said it is hard to predict how France and Lebanon’s relationship will evolve, but more than likely they will remain close allies. “I believe France will always be there for Lebanon because they both need each other.”

Read this article in our October print edition

Our October edition will be available in newsagents from next week. You can also subscribe to read the full digital version of The Connexion newspaper, published monthly. Subscriptions start from €4 per month and include Print + Digital or Digital-only options. All subscription packages give you unlimited access to our online articles at connexionfrance.com. Find out more.