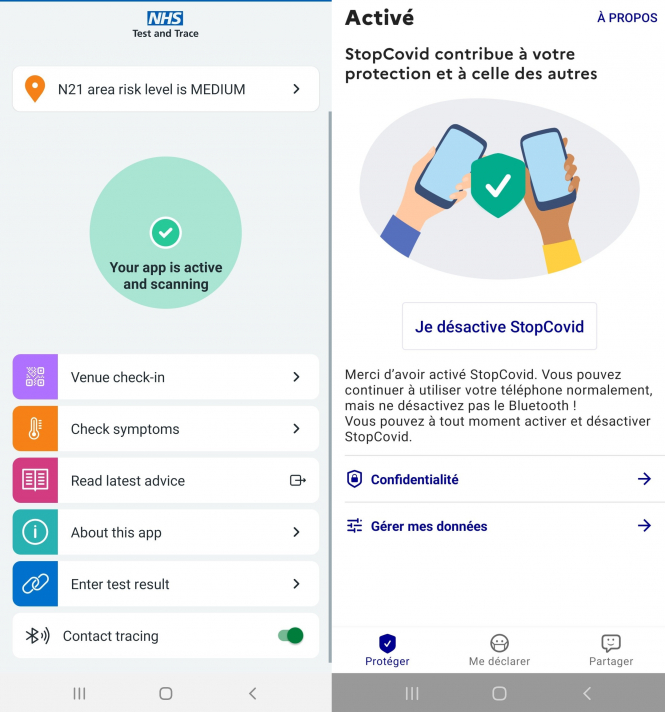 England and Wales launched its new coronavirus tracing application, NHS Covid-19, just one week ago and it has already been downloaded over 12 million times.

In addition, Northern Ireland’s StopCOVID NI and Scotland’s Protect Scotland app, which were launched earlier, have also been downloaded over 300,000 times and 1 million times respectively.

In the four months since France’s own StopCovid application has been available, it has been downloaded around 2.4 million times.

This represents 3.6% of the French population. The Comité de Contrôle et de Liaison COVID-19, which acts as a bridge between civil society groups and the government on coronavirus-related matters, has said that for the app “to be really useful, it must be downloaded by at least 30 to 40% of the population”.

In one week NHS Covid-19 has been downloaded by roughly 20% of the population.

France’s minister for digital transition, Cédric O, has said that more work was needed to convince the French population to download the app.

There could be many reasons why there is a gulf in popularity between the two apps.

One reason for the difference in popularity could be culture, suggested Jerôme Colombain, technology journalist and author of the book Faut-il Quitter les Réseaux Sociaux (should we quit social media).

“Where the French have seen a gadget or a totalitarian trick, the British have taken the app for what it is: a civic tool,” he wrote on Twitter.

“The British are very respectful of the NHS, which for a long time has had its own ‘app store’ with audited health apps. Beyond the cultural differences etc, the starting context is therefore very different.”

StopCovid’s reputation took another hit when French Prime Minister Jean Castex admitted on TV that he had not downloaded the app. Mr Castex had to self-isolate in September as he was in contact with Tour de France director Christian Prudhomme, who tested positive for the virus.

Both StopCovid and NHS Covid-19 have the same goal: Alert users of the possibility of being in close contact with someone positive with coronavirus.

To do this, the apps rely on Bluetooth technology, sending warnings to users if they have been in close contact with a positive case.

NHS Covid-19, though, has a number of other features.

It can also be used to check-in to venues, such as restaurants or bars. An alert is then sent to the app user if it turns out that someone positive with coronavirus visited the venue at a similar time.

The app also allows users to check their symptoms, as a basic means of self-diagnosing coronavirus.

Users can also book a coronavirus test through the app, and, if they are recommended to self-isolate, they can use the app to set a timer and count the number of days they need to quarantine for.

These functions mean that NHS Covid-19 can be effective even without activating the bluetooth tracing feature. The French app relies on the user keeping their bluetooth on at all times to scan for other users in the area.

NHS Covid-19 was built in conjunction with Apple and Google and uses a decentralised approach. In basic terms this means that any data the app collects is not stored in one, single place.

Unlike many other European countries, France rejected this approach and designed the app without the help of the US tech giants, using a centralised approach.

This has led to concern among some groups for users’ privacy.

In April, Amnesty International released a report calling for the “highest vigilance” in adopting the StopCovid app.

“Digital surveillance measures raise important questions about how we collect, store, use and share our personal data. To date, the French government has not provided enough details about the StopCovid application to ensure that its use is respectful of human rights,” the report noted.

Earlier this year the UK trialled an app based on a centralised approach, but eventually abandoned it.

“The system generates a random ID for an individual’s device, which can be exchanged between devices via Bluetooth (not GPS). These unique random IDs regenerate frequently to add an extra layer of security and preserve anonymity.

“The app does not hold personal information such as your name, address or date of birth, and only requires the first half of your postcode to ensure local outbreaks can be managed,” the UK government states.

An academic study published in May that looked into the two approaches stated that there are benefits and risks to both.

“Centralised systems protect against malicious users, but a malicious server could abuse the system by potentially re-identifying and tracing users’ locations.

“Conversely, decentralised systems make public the ephemeral Bluetooth identifiers of diagnosed people, which could lead to mass surveillance by any malicious individual,” the study stated.

Both the French and UK governments have said that interoperability - two or more different apps being able to function together - is being studied.

The French government also says that it is actively participating in work being carried out by the European Commission.

In mid-September, the Commission started interoperability trials between the apps of Czech Republic, Denmark, Germany, Ireland, Italy and Latvia.

In the meantime, France is advising citizens who travel or work abroad to make use of both the French app and the local country’s app, if it has one.

StopCovid: Your feedback on contact-tracing app