Wild animals to be banned from shows in France – where will they go? 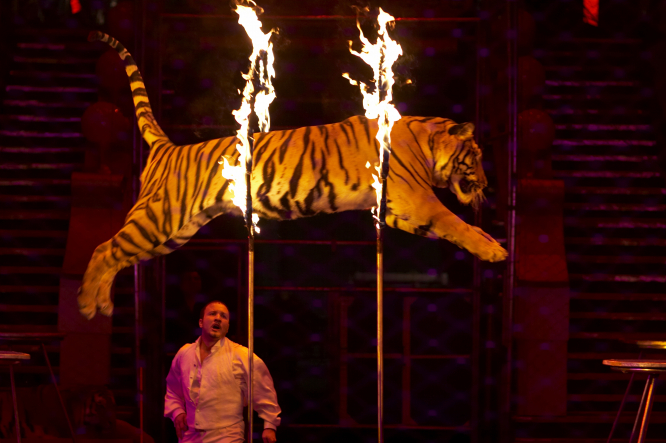 A tiger jumping through hoops of fire at a circus show. This practice is gradually being brought to an end. Pic: Sergey Petrov / Shutterstock

With a new law in France set to introduce a gradual ban of wild animals in travelling circuses and marine mammals in dolphinariums, we look at what will happen to them.

France will see the complete prohibition of wild animals being used in travelling circuses within seven years, and marine mammals in captivity within five years.

The animal welfare law, which was passed on November 18, will affect around 800 wild animals and 25 marine mammals.

What will happen to the circus animals?

Many wild animals held in circuses were bred in captivity, meaning that they would not survive living in the wild.

President of animal rights association Code Animal Alexandra Morette, said: “Normally, we would want these animals to go to partnering reception structures such as shelters.

“We don’t have solutions for all of the wild animals but we are working with the government to create new places and new structures or to expand existing structures.”

These also include zoos and sanctuaries.

Code Animal has an ongoing petition, which has so far gained almost 100,000 signatures, asking the government to help to change three public zoos into reception centres for captive wild animals, as well as to make the animals legal property of animal protection associations.

Ms Morette has also asked the public to alert Code Animal to the presence of circuses that use wild animals so the organisation can follow their movements.

However, the new law only applies to travelling circuses (as opposed to stationary ones) meaning “some of these animals will stay in circuses”, according to co-founder of animal rights group Association Paris Animaux Zoopolis (PAZ) Amandine Sanvisens.

She also explained that the law foresees the creation of a commission that will work together to find solutions.

It will likely include a group representing the circuses, the government, animal rights associations, and vets – but the exact participants will be decided in a decree published by Minister of Ecological Transition Barbara Pompili.

Ms Sanvisens said: “We hope that the maximum number of animals will be placed into shelters in France, in Europe, even in Africa, so that they have an end of life that is the closest possible to their natural environment.”

She urged the public to avoid supporting animal captivity by refusing to watch shows that use wild animals, as well as to write and send emails to local MPs to ask that they make sure that this law is put into place.

What will happen to the marine mammals?

Building a marine life protection centre in France is the only option for these animals, according to Frédérique Gilbert, founder and director of association Cetasea, which is aiming to build such a centre in France.

“Cetasea has been in existence for six years, so we propose a space for rest and rehabilitation, research, education and conservation. We are working on a space where animals that do not have a place to live can be taken in, in the same way as there are shelters for birds and land mammals.”

Cetasea is in talks about constructing such a centre in the Bay of Biscay “as soon as possible”, with an initial budget of €5million.

Hunter fatally shoots bear in southwest France after it bit him