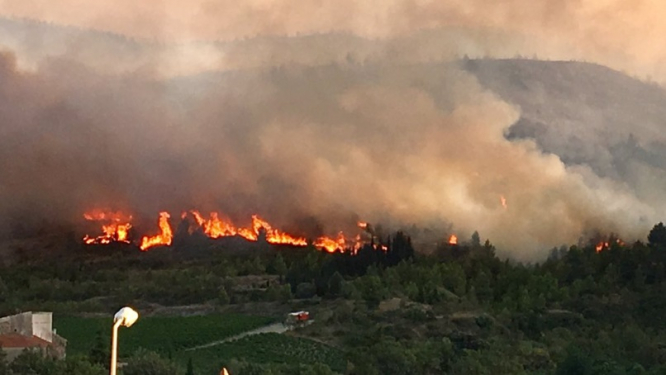 The wildfire spread quickly due to very dry ground and strong winds, but is now under control
By Connexion journalist

The fire took hold in Montirat, around 12-15km southeast of the medieval town of Carcassonne.

Firefighters prioritised saving property and vineyards in the area, but the work was difficult due to strong winds and very dry ground.

Colonel Henri Benedittini, director of the Aude emergency fire unit le Service Départemental d'Incendie et de Secours (SDIS), said: “We had around 510 firefighters on-site...there were also four Canadair planes and one Dash, which were helping to battle against the flames.”

The fire is now under control, firefighters have confirmed, although the area is still at risk due to “unfavourable weather forecasts”, especially wind, the report said.

The fire has affected more than 900 hectares, mainly of pine forests and scrubland, with 22 people requiring evacuation from a gite in the nearby commune of Pradelles-en-Val.

No other properties are now in danger, and no-one has been reported injured.