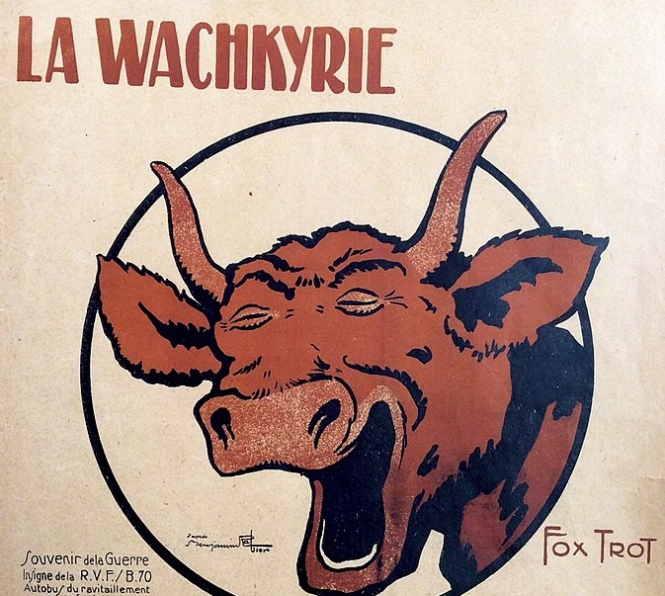 The precursor to the name "La Vache Qui Rit", which would emerge after the war
By Connexion journalist

Today is the 100th anniversary of the Armistice (Sunday November 11), with commemorative events taking place across France.

A writer at French newspaper France 3 - Amandine Caniard, whose great-grandfather died in the war in 1914 - and who has conducted research into her First World War family history, has explored four inventions from the time period that capture how much the war affected France and changed the habits of its people.

Today one of the best-known spreadable cheeses in France, the unusually-named La Vache Qui Rit (The Laughing Cow in English) emerged due to wartime satire.

A satirical cartoon poked fun at the “Ride of the Valkyries” music by famous German composer Wagner, which by extension, mocked the mythological animal figures often used by the German army. “Valkyries” became “La Wachkyrie”.

The RVF’s vans were decorated with a cartoon of a smiling cow - created in a competition and which would become well-known in France - which was nicknamed “La Wachkyrie”.

In 1921, Mr Bel was searching for a name for his soft cheese. He remembered the wartime nickname, and “La Vache Qui Rit” was born, becoming widely recognised after first appearing in television advertising in 1968.

Delphine Peyrel, marketing manager in Western Europe for the brand, said: “Legend says that it was Léon Bel’s wife [although some accounts say it was the idea of the wife of the original illustrator, Benjamin Rabier] who had the idea to give the cow earrings to make her more feminine.”

Julie Régis, manager in charge of the brand Young & Rubicam, said: “Few brands built on such foundations have survived so long or have travelled through the generations.”

Today, the red laughing cow continues to be “the face” of the cheese, and even has millions of fans on Facebook and other social networks.

It is sold in 120 countries across five continents.

La Vache Qui Rit is not the only cheese to have emerged from a wartime history. Camembert, with its distinctive wooden box frame, is also associated with the troops.

The cheese, named after the village of the same name in Normandy, was given to the French soldiers as part of their rations, and - in part due to this - entered firmly into the national consciousness.

Due to this growth in demand, the cheese is now made in almost the entire northern part of the country - anywhere that milk production is abundant.

The spread of Camembert - helping it to enter the rations of soldiers in the first place - was also helped earlier by the Paris-Lisieux train line, which opened in 1854.

It cut the journey time between the two cities from three days to six hours, allowing much easier transportation of goods. This was exploited to its full advantage by the cheese producers, who began to flood the market up and down the line.

The famous wooden box was created in 1890, to protect the cheese during its transportation. It was exhibited - complete with Art Nouveau-style label depicting a strident Marianne - at the Paris Exposition Universelle in 1900, and became an emblem of the country.

It would later be described as “the soldiers’ Camembert”, “the Camembert of the Allies”, and  even “the National Camembert”, the latter of which featured a label showing a German soldier perched on a donkey and being kicked.

In 1919, a new label celebrated victory in the war, featuring the words “France, queen of the world” and images of a victory torch and the Tricolore flag.

Another invention with links to the First World War is the wristwatch: namely, the popularisation of a watch being secured to your wrist with a fabric or leather strap.

The concept was first recorded in 1810, with Napoleon’s sister Caroline Murat having ordered such a design then. It was delivered in 1812.

But during the war, soldiers - many of whom had carried a traditional pocket watch from home on their person - began to fashion leather straps that held the watch in place and could be secured onto a wrist.

This helped to prevent the loss or breakage of watches during attacks or during long stays in the trenches, and also helped to limit the injury caused to the wearer in case the watch smashed.

The usefulness of the concept stuck, and would later morph into the more familiar design we know today.

Lastly, another easily-recognisable product that owes much of its popularisation to the First World War is the lipstick tube - as in, lipstick that slides easily out of its tube as it is used.

While lipstick (or red paint of some kind) has been in use on women’s lips for millennia, its use - and the predecessor to the sliding design we see today - was popularised in France from 1915, when cosmetics manufacturer Roger & Gallet released the cardboard “slide case” ("étui-glissette").

This took lipstick out of a precarious and expensive glass bottle, and made it portable.

Women, who continued to maintain homes and jobs during the war while the men were at the Front, began to wear the makeup, which until then had been the preserve of actresses or even prostitutes.

Women began to see the colourful makeup as accessible and a source of distraction in difficult times.

As Jean-Marie Martin-Hattemberg, author of a book on the history of lipstick, explains: “Times are grey [so] I’m wearing colour.”
The design would later be adapted to the “pivoting”, sliding design we know today, by American James Bruce Mason Jr in 1923.