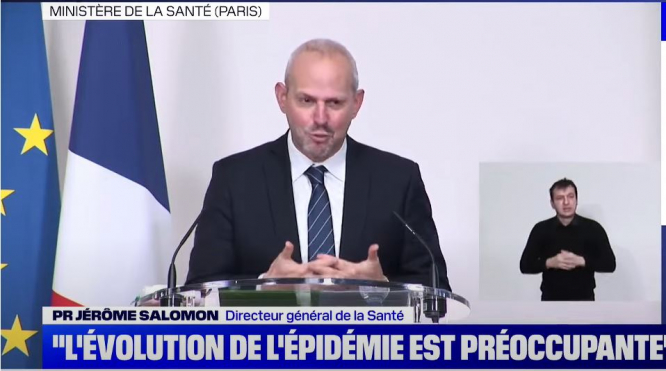 France’s health director Jérôme Salomon has called the evolution of the Covid-19 epidemic “worrying” after nearly 20,000 cases were reported in the past 24 hours.

Mr Salomon said, “after a sharp drop in the number of cases, then a plateau, a rising trend has been observed for the past few days.”

He put this down to a combination of more people moving around in the lead up to end-of-year festivities and colder winter weather.

Hans Kluge, the director of the European branch of the WHO, has also expressed worries about the Covid-19 situation in Europe.

He said the evolution of the virus “raises great concern” and said it is now the fifth leading cause of death in Europe.

France lifted lockdown restrictions on December 15 after Covid-19 cases in the country dropped from over 50,000 per day in October to around 10,000 per day earlier this month.

That number has been slowly rising in recent days and in the past 24 hours 18,254 new cases were recorded. The average number of daily cases in the past week is 11,400, Santé Publique France reported.

To understand the full picture, though, it is necessary to look beyond just daily positive case numbers.

While the number of reported positive tests has been increasing in the past few days, the percentage of positive test results is actually dropping.

This means fewer people who are going to get tested are testing positive.

Santé Publique France reported that 14% more tests for Covid-19 were carried out this week compared to last week.

The red line in the below graph shows the percentage of positive test results over time. After a second peak in October, it fell sharply and has plateaued in recent days, with a very slight downward trend.

France Covid: Where do most people catch the virus?