Views of Macron-Johnson meeting in Britain and France 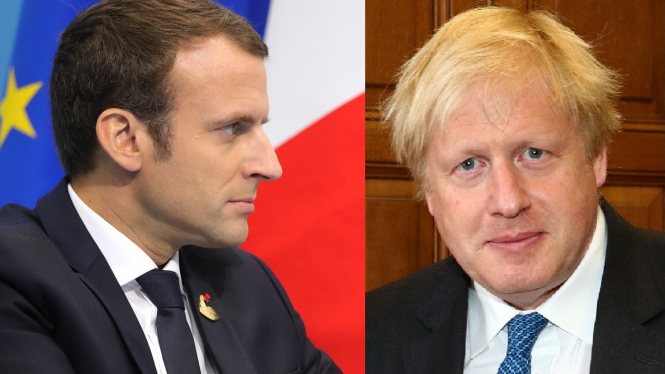 While some newspaper headlines in Britain have treated Mr Johnson's two-day targeted European leaders' trip - which featured meetings with German Chancellor Angela Merkel and Mr Macron as a personal and political victory - French journalists have been much less effusive.

Such is the difference in attitudes towards Brexit in France and the UK that, while Thursday's meeting at the Elysée Palace generated front page after front page in the British press, it was nowhere near as visible in France. Domestic issues, the G7 in Biarritz, speed cameras, and the devastating forest fires in Brazil, have taken precedence.

The Times did not lead with the meeting, but said: 'New hope for Johnson as Macron says deal possible'.

The mood was not so positive in other areas of the UK press. The Independent reminded Mr Johnson of an important message from Mr Macron with the headline: "We can't axe backstop, Macron tells Johnson". The sub-head: "French president dashes hopes of finding new Brexit deal" will have come as a sobering comedown after the buoyant views of the Express and Telegraph.

The Scotsman, meanwhile, stated: "EU will not tear up the Brexit deal, Johnson told".

SCOTSMAN: EU will not tear up the Brexit deal, Johnson told #tomorrowspaperstoday pic.twitter.com/P2jeuFdGjG

And, a day after the Mail trumpeted: "Can we do it? Ja, we can" following Mr Johnson's meeting with Mrs Merkel in Germany, in which the Chancellor laid down a 30-day deadline for the UK to find those alternative solutions to the Irish border, Brexit was absent from the front page of the paper on Friday. It was dropped to the inside pages in favour of a health story about a magic-bullet four-in-one pill.

Mr Johnson did get a mention on the Mail's front page. It said he has hired Bake Off's Prue Leith to improve hospital food standards.

The left-leaning Libération - after managing a 'No gift for Johnson' pull on the front page - was scathing with its headline: "Boris Johnson is running on empty towards a hard Brexit".

Its editorial opened with the line: "The British Prime Minister, who was received by Macron in Paris on Thursday, is receiving a series of more or less polite refusals from European political leaders. Despite the negotiations, everyone seems to be preparing for the prospect of a no deal."

Le Figaro was more circumspect, but no less blunt with: "Macron and Johson encamped in their positions". It said that the President and Prime Minister were prepared to "search all the way to the end for the unfindable exit agreement from the European Union".

But, it added: "behind the diplomatic smiles and warm handshakes ... Emmanuel Macron and Boris Johnson did not move from their respective positions. The first meeting between the French President and the new British Prime Minister on Thursday in Paris resulted only in agreed statements, and no progress."

Le Monde, at least, found some space on its front page to include Brexit in a headline listing the jobs Mr Macron faces in the coming weeks: "G7, Brexit, pensions - the objectives for Macron" its front page read on Friday.

Inside, it quoted Mr Johnson with the headline: "We can still reach an agreement": at the Elysée, Boris Johnson insists on a Brexit on 31 October".

The article added Mr Macron also said the next 30 days were crucial to the future of the Brexit negotiations, but noted that he added: "The future of the United Kingdom can only be found in Europe".