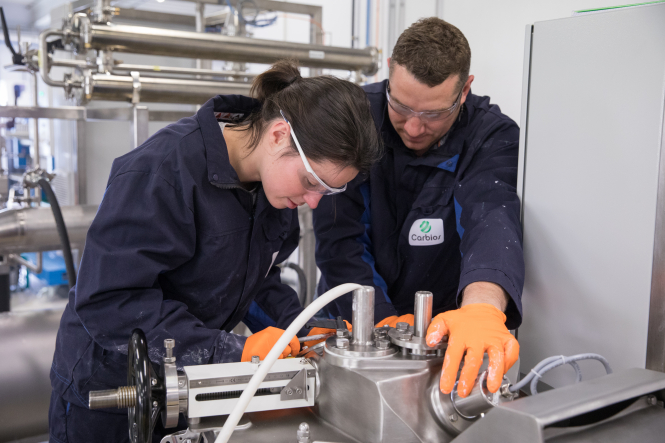 The Carbios plant, outside Lyon, will convert PET plastic – used in water and fizzy drink bottles and polyester fibres – back into its raw material. Current recycling methods “downcycle” plastic into lower-
quality material, which means it eventually cannot be recycled any more.

This process means the new material is of the same quality as the original, allowing for infinite recycling. In just 10 hours, a tonne of shredded plastic can be 90% degraded by the enzymes, which have been developed from those found occurring naturally in landfill sites.

An estimated 20million tonnes of PET plastics are produced each year, as well as 50million tonnes of polyester textiles. It has been estimated that less than half of all bottles made from this material are recycled. Existing recycling is based on melting it down but this means the recycled plastic is weaker than new plastic or polyester fibre, so much of the PET plastic is buried in landfill dumps.

Another French company, TechnipFMC, best known for constructing off-shore oil platforms, will build the unit. The deal, announced during the coronavirus lockdown, could lead to the technology being used at PET manufacturing plants all over the world.

Benjamin Audebert, head of investor relations at Carbios, said: “The idea is that the units, installed right at the factory, will produce the raw ingredients from PET plastic and polyester and reduce the amount of new raw material which has to be used. We predict that, in 10 years’ time, three million of the 20 million tonnes of PET plastic produced annually will be from recycling using our method.” Carbios’s business model is to license the technology and also to sell its patented enzymes.

L’Oréal, Nestlé Waters, PepsiCo and Suntory Beverage & Food Europe have partnered with Carbios to help it move to commercial production. Jean-Claude Lumaret, the managing director of Carbios, said when the plant was announced: “We have a common ambition to improve the environmental footprint of the plastic industry. The technology of Carbios has demonstrated a level of efficiency superior to existing recycling technologies for recycling plastics based on PETs. To see it spread and become commonplace, it is essential for operators to be able to evaluate the procedures under real operational conditions.”

Earlier this year, Carbios signed a deal for the world leader in the production of enzymes, Danish company Novozymes, to start producing the PET-eating enzyme on a large scale. As well as the development work on recycling PET plastics, Carbios has also developed enzymes, co-produced with Novozymes, for PLA plastics produced from plant products, now commonly used for thin, single-use bags.

A product is due to be launched this year which, by including the enzymes in the manufacturing process, will allow the bags to be put into the household compost. “Under normal conditions, they will disappear totally in six months,” said Mr Audebert. “The process leaves lactic acid, which is an acid which is produced anyway in every compost heap.”

For this product, a joint venture called Carbiolice was formed with seed company Limagrain Céréales Ingrédients, which has led the way developing bio-degradable and bio-sourced plastics. Founded in 2011 and listed in 2013, Carbios, based at Clermont-Ferrand, has 28 employees and has raised €36million so far for its projects.

Its last fund-raising cycle saw it raise €14.5million, with French industrial giants Michelin and L’Oréal among the investors. British scientific review Nature published a story about Carbios in April, in which it praised the efficiency of its PET recycling enzyme.