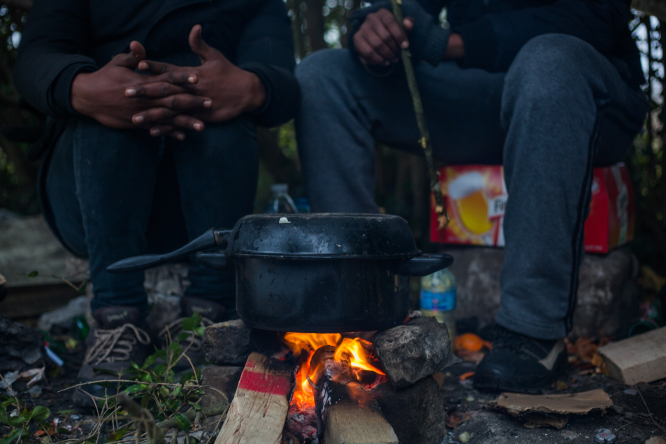 The plight of migrants living in precarious conditions in Calais and Grande-Synthe, near Dunkirk, is a 'forgotten problem', according to one of the few charities operating in the area.

Josh Hallam, field manager for British-run Help Refugees said life on the ground can be tough: “All the migrants are fleeing from unimaginable events in their home countries and it is difficult to hear their tales. They need professional counsellors, but we have very few.

“If the situation was recognised as a refugee crisis, maybe there would be more help, but not even any of the large charities are here. It is a forgotten problem. The media are not interested in their plight and Brexit is stealing all the headlines.”

Help Refugees would welcome any help volunteers can give to support migrants living in precarious conditions, in Calais, and Grande-Synthe, near Dunkirk.

The organisation (helprefugees.org) runs the biggest aid operation in the area and helps provide basic needs for between 1,000-1,500 people who still come to these areas, though the major camps are no longer there. The notorious Calais ‘Jungle’ was cleared in October 2016 and the Grande-Synthe camp near Dunkirk was destroyed by fire in April 2017.

Mr Hallam said the number of migrants fluctuates massively. “In Calais most come from Ethiopia, Eritrea, Afghanistan, Iran and Sudan - and in Grande-Synthe they are mostly Iraqi-Kurds and some Pakistanis. Around 300 are unaccompanied minors with no family. There are many families and men in their twenties.

“Some want to go to the UK to join family members there but others want to ask for asylum in France. Some have just arrived, and I know some who have been here for two years.”

They are forced to live in appalling conditions, he said.

“There is no camp in either town. They have been allowed to sleep in a gymnasium in Grande-Synthe during winter, but not much longer. So they sleep in the forest, on the streets, or on industrial wastelands, often alongside pollution.

“They are constantly being evicted. Some say this happens to them every two days when the police come along, take their tents and sleeping bags and tell them to move on. We are constantly handing out both these items.”

The UK-registered charity was set up four years ago in Calais.

The main aim is to provide much-needed food and clothing, help find accommodation and provide facilities for children and teenagers. They are based in a warehouse, along with other charities. There are a handful of paid workers and 50 volunteers, sometimes rising to more than 100 at weekends. Some come for a few days or a few months and others come for a few hours when they can.

“We always need extra pairs of hands and all help would be welcome.

“There are many jobs to do, either sorting out and handing out donated clothes or preparing food, and we would also be grateful for help from anyone with legal skills, as another of our roles is to monitor the treatment of the migrants as we believe their human rights are often violated.

“We would also be grateful for donations of clothing, particularly men’s clothing. Most donations come from the UK, so it would be great to have more from France.”

Their real need for volunteers is from September onwards as they have enough for the summer, when people are most available.