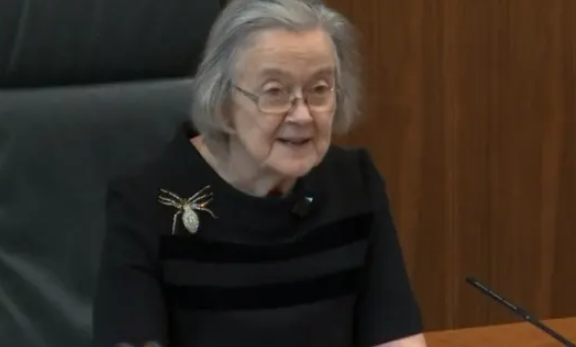 The 11 justices of the UK's highest court effectively ruled that Mr Johnson and his Privy Council lied to the Queen when he asked her to suspend Parliament for five weeks in the run-up to the date Britain is set to leave the European Union, on October 31.

Downing Street said it was 'currently processing the verdict'.

In reaching their decision, the judges upheld a decision by Scotland's highest civil court, which had ruled that Mr Johnson acted illegally when he denied Parliament the chance to scrutinise the government's Brexit strategy.

At the same time, judges overruled the High Court in London, which had said that the decision to suspend Parliament was a political matter that could not be reviewed by the courts.

The justices instead ruled that prorogation was a decision made by the executive that denied Parliamentary supremacy - which meant it was open to court scrutiny.

Delivering the court's conclusions, Supreme Court president Baroness Hale said: "The decision to advise Her Majesty to prorogue Parliament was unlawful because it had the effect of frustrating or preventing the ability of Parliament to carry out its constitutional functions without reasonable justification."

She said Mr Johnson's decision to suspend Parliament at this time has had an 'extreme' effect on the 'fundamentals of our democracy'.

“This means that when the royal commissioners walked into the House of Lords it was as if they walked in with a blank sheet of paper. The prorogation was also void and of no effect. Parliament has not been prorogued."

In its full written judgement - which runs to some 20 pages - the court said: "It is impossible for us to conclude on the evidence ... that there was any reason - let alone a good reason - to advise Her Majesty to prorogue Parliament for five weeks."

After the ruling, Speaker of the House of Commons, John Bercow said in a statement: "I welcome the supreme court’s judgment that the prorogation of parliament was unlawful. The judges have rejected the government’s claim that closing down parliament for five weeks was merely standard practice to allow for a new Queen’s speech.

"In reaching their conclusion, they have vindicated the right and duty of Parliament to meet at this crucial time to scrutinise the executive and hold ministers to account. As the embodiment of our parliamentary democracy, the House of Commons must convene without delay. To this end, I will now consult the party leaders as a matter of urgency."

The SNP's Joanna Cherry, who was one of the litigants in the Scottish case, opposition leader Jeremy Corbyn, Lib Dem leader Jo Swinson, and Plaid Cymru's leader in Westminster Liz Saville Roberts have called for Mr Johnson's resignation following the court's decision.

Speaking outside the Supreme Court immediately after the decision, Ms Cherry said: "Boris Johnson's position is untenable and he should have the guts to resign."

Mr Corbyn said he would write to the Speaker to demand an urgent recall, and said Mr Johnson should 'consider his position'.

Jo Swinson, the Lib Dem leader, says the judgment shows that Boris Johnson is “not fit to be prime minister”. In a statement she added: "Given this verdict, parliament should be sitting so that we can continue to question the Conservative government on their disastrous Brexit plans."

Ms Roberts said: "The supreme court has delivered a damning and unanimous verdict. Boris Johnson has broken the law for undermining the basic principles of democracy. The prime minister has shown himself to be no better than a tin-pot dictator, shutting down democracy to avoid scrutiny.

"In his short time in office Boris Johnson has proven himself to be a deeply dangerous and anti-democratic leader, with no respect for the rule of law. It would be a complete affront to civilised society if the prime minister did not resign after this historic ruling."