Hugo home is anything but Misérable 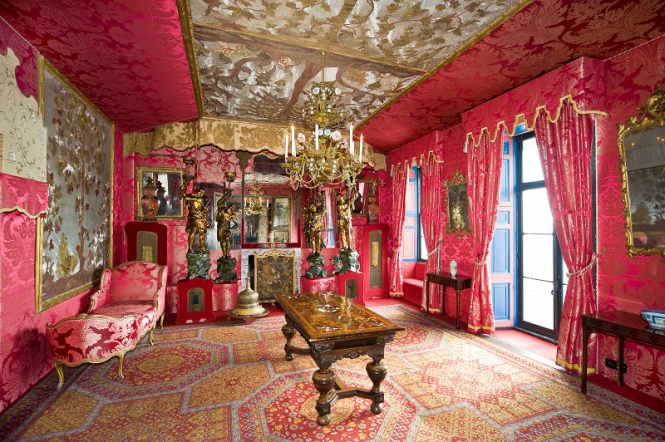 Amazingly to anyone who thinks of him as purely a literary giant, much of the house and the decor was designed by Victor Hugo himself, with intense harmonised colours dominating each room. “He was very aware of it being a work of art,” says Gérard Audinet, the director of ‘Maisons Victor Hugo’.

“It was very much an expression of himself.” He was also a keen photographer and a visual artist (he produced more than 4,000 drawings over his lifetime).

“Structural problems, especially in the hostile island climate of Guernsey, meant there was much water infiltration which had damaged the contents, but it wasn’t worth attempting to renovate the interior before the structural issues were addressed.”

The €4.5million renovation took over a year and was paid for by the Pinault Collection and the Ville de Paris, who own the house today.

The only French museum not on French territory, it is managed by Paris Musées who also manage Victor Hugo’s house in the Place des Vosges in Paris.

Particular attention has been paid to preserving the lookout deck and the room leading onto it as well as the workshop and the winter garden.

“The decor features a lot of fabric, some of which had to be completely replaced. In the salon rouge, for example, the hangings were sent back to the original makers who made identical copies. It is fortunate we have so many photos of the house but, of course, they are monochrome, and often pose more questions than they answer. It’s as if you were trying to fill in missing words in a manuscript.”

Some rooms were better documented than others, he explains.

There are almost no photos of the third floor, for example. “It was a real adventure, but also quite stressful deciding what to put in the black holes. We also restored carpets, paintings, artworks and furniture and each of those was a little adventure in itself.”

It’s always very complicated, he says, to retrofit a house to allow wheelchair access, and it simply was not technically possible for the entire property but at least the ground floor is now accessible. “We have also created a small ticket office with a sales counter, plus toilet facilities.”

He admits that although there are plenty of flights from the UK, accessing Guernsey from France is not easy.

There are ferries from St-Malo. “But day-trips are increasingly difficult, you have to count on staying overnight,” he adds. “Also, I would advise Connexion readers to book a visit to Hauteville House (open April to September) in advance because due to its fragility, places are limited to 10 people on guided group visits.

More accessible is Victor Hugo’s house in Paris (6, Place des Vosges) which is also open to the public. The visit is organised in such a way that strolling through his rooms takes you through his life as a young writer, his political awakening, exile, return to France and finally, his death.

The salons are fully furnished with his belongings, artefacts and artworks. There are family portraits, gifts, heavy Gothic furniture, Hugo’s famous desk at which he would write standing up and, in the last room, the bed in which he died.