Lazy days of Doisneau in the Dordogne 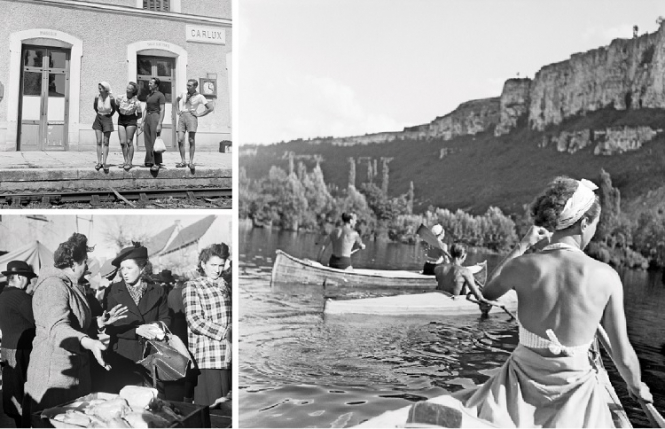 Clockwise, from left: Pierrette Doisneau and friends waiting for the train at Carlux station, 1937; Pierrette canoeing on the Dordogne, 1939; gossiping on market day; Robert Doisneau
By Jane Hanks

The only permanent exhibition dedicated to the works of French photographer, Robert Doisneau has been opened in a restored old railway station in the small, rural village of Carlux, Dordogne. Entry is free and the centre is run by the local Communauté de Communes, Pays de Fénelon which has turned the old building which had been deserted for years, into a structure with a tourist office, temporary exhibition centre and two rooms dedicated to Doisneau.

Robert Doisneau, 1912-1994 is known world-wide for his black and white photographs which captured everyday life, often on the street. One of his most famous photos, taken in 1950 is Le Baiser de l’Hôtel de Ville of a couple kissing in a busy Paris street which came to represent the romance of the French capital.

The Dordogne was one of his favourite holiday destinations and after a first trip in 1937 he returned year after year. He took many photos, and it is a selection of these which are now on permanent display. One room is dedicated to his holidays, often featuring canoe trips down the Dordogne River.

His first visit in 1937, when he was just 25, was at the very beginning of tourism when paid holidays from work had just been introduced by law. Up to then he had been working as a photographer for Renault, but he had hated taking photographs to rule and had just been sacked for repeatedly turning up late to work.

He was still allowed his paid holiday and at last had the freedom to take the photos he wanted to. Many are photos of his wife Pierrette and their friends on pre-war carefree camping holidays, and others of return trips after the Second World War. The second exhibition room shows portraits of local people in traditional pursuits; selling geese at the market, weighing truffles, two women in a café knitting and chatting and a man about to delight in a plate of foie gras.

He had an eye for that little detail that made the ordinary, extraordinary and his photographs are full of the vitality of everyday life, and peopled with animated characters.

In an age when you could not simply hit the button and take a realm of images and choose the best later, he must have had immense patience and skill to capture the right moment. You understand he meant what he said in his quotation: “There are days when you feel that just the simple act of seeing is real happiness.”

When the project to convert the old station at Carlux began, the President, Patrick Bonnefon and the vice-President, Vincent Flaquière of the Communauté de Communes knew that there was a photo of the station taken by Robert Doisneau in 1937, when it was still a busy train line.

Through a family friend they were then able to meet the photographer’s daughters, Annette Doisneau and Francine Deroudille who now run his old studio at Montrouge in Paris. They are custodians of the 450,000 negatives he left when he died and they manage their use in exhibitions and reproductions.

The Carlux project appealed to them as they knew just how much their father had appreciated his time in the Dordogne and neighbouring Lot which he described as having “the most beautiful landscapes in the world.” They lent the commune 150 negatives, which were printed by the workshop used by the Doisneau daughters.

Julie Fouillade who is a guide at La Gare Robert Doisneau, says the exhibition has been well received by tourists and local inhabitants: “A lot of older people have been really fascinated to see photos of an era when they were children and they have recognised people in the shots. One man was delighted to find a photo of his mother who worked for the local Rougié foie gras farm on display.

“Others have spotted well known characters from the local markets. It is a portrait of how life was in the early 20th century.”

For information on the exhibition:
www.facebook.com/lagarerobertdoisneau