Striking a pose for changing fashions 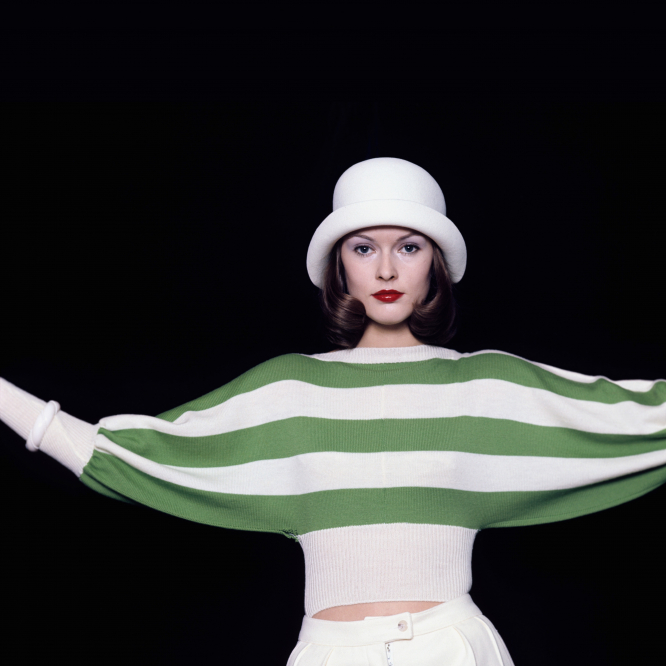 An exhibition of the works of one of the most revolutionary fashion photographers of his time, Peter Knapp, is on show at the Cité de la Mode et du Design in Paris up until June 10.

He was working at a time when fashion was beginning to reflect what was happening on the street, rather than solely in the rarefied atmosphere of the haute couturiers where their designs were destined for the very rich.

Peter Knapp’s images reflect the feeling of emancipation, daring and creativity at that period, the two decades spanning 1960–1970. His images are full of movement and imagination and marked the world of fashion photography. He worked as Artistic Director of Elle from 1959 to 1966 and 1974 to 1978. He also worked for Vogue, Stern and The Sunday Times and made documentaries for Dim Dam Dom, a cult TV magazine programme for women in the sixties.

In the Exhibition, Dancing in the Street, Peter Knapp et la mode 1960-1970, more than a hundred of his photographs are on display. One of the two exhibition curators is Audrey Hoareau, who is also the co-founder of The Red Eye, an association which promotes and defends photography in all aspects: “The importance of his work was that he was there at a key moment in the history of fashion, and in history itself.

“There was a new freedom in all its sense and a turning point for creation, with the arrival of trousers, shorter skirts and ready-to-wear clothes.

“He was an enormous influence on the photography of his time. He immortalised Yves Saint Laurent’s most ground-breaking collections, he was there at the beginning of Thierry Mugler’s career and he had an unfailing friendship with André Courrèges.

“He was one of the most important links between two worlds: fashion and photography.”

She says he is, above all, an artist: “Photography is just one of the ways he expresses himself. As well as his photos, his drawings are sumptuous. A visitor to the exhibition will see photographs which have come out of the studio, and which show that real life has suddenly become interesting.

“The exhibition is a breath of fresh air, a homage to women, and to a modern woman with greater freedom. There is an undeniable joy and freshness in his photographs.”

Peter Knapp was born in 1931 at Bäretswil, Switzerland. He studied painting and graphic art before discovering the world of photography. In 1951 he moved to Paris and began his career there. He has always said that the most important element for him is to create an image.

In a recent interview with France Culture Radio, he said “I see no difference between a painting and a photograph.” He also said in the interview that he fell into fashion by default and it was not just the clothes which interested him: “In fashion, the way clothes are worn is as important as the clothes that are shown.”

For him the movement and the expression on the models face and the setting were all part of the picture – something that was new at the time. When asked if it gave him pleasure to visit the exhibition showing his early work he said: “I always find it difficult to accept what I am working on at the present time, the results correspond rarely to my imagination, so to see the images I created 60 years earlier, yes, it gives a certain satisfaction.”

The exhibition is on until June 10. Open every day 12-18.00, entry €5. A book, Dancing in the Street. Peter Knapp et la mode has been produced for the exhibition and it is the first time the photographer has agreed to create a book dedicated entirely to fashion.

There are more than 200 photographs taken between 1956-1999 with more than 150 images which have never been published before. Book published by Editions du Chêne, price €45.