Tribute to Revolutionaries gets revamp 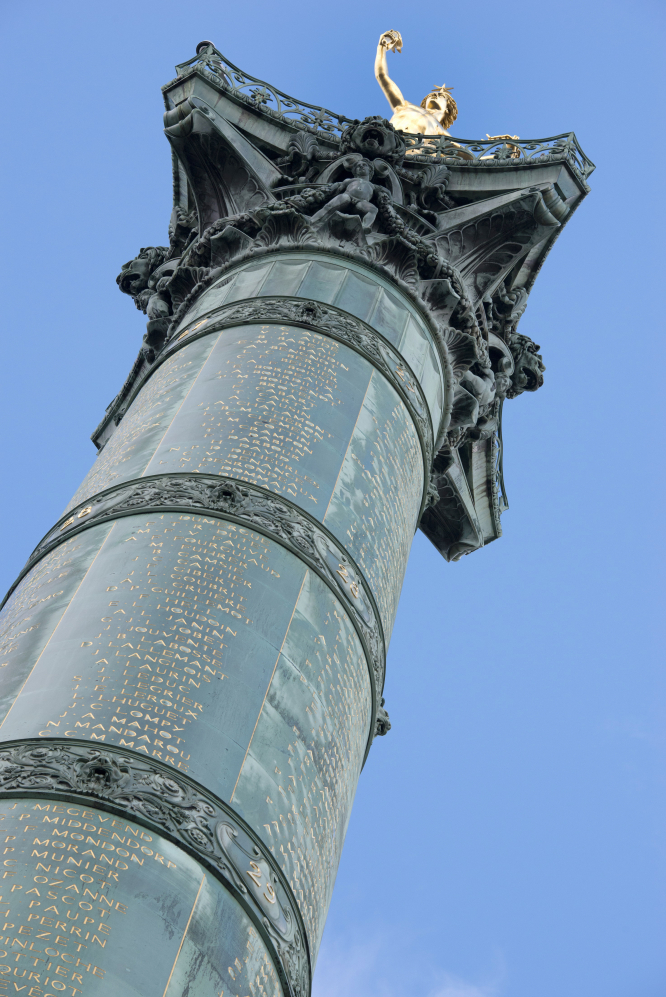 A monument on one of the most iconic sites in France will be opened to the public this spring after a two-year restoration programme. The Colonne de Juillet is on the site of the Bastille prison, Place de la Bastille in Paris, the starting point of the French Revolution when the Royal prison was stormed by a crowd on July 14, 1789. The bodies of nearly 700 revolutionaries are buried there.

However, they do not come from the first French Revolution but from two later ones. 500 are from the Trois Glorieuses which took place in July 27-29 1830, hence the name “Colonne de Juillet”, and which saw the fall of King Charles X of France, and nearly 200 are from the 1848 Revolution.

This is a period of French history not many people know about and the Centre des Monuments Nationaux, which is spending €3M on the project, hope people will be able to discover these lesser known revolutions when they step into the tomb for those citizens who are remembered for fighting for the right to freedom in France.

After the first French Revolution the monarchy came back to rule in 1814 after the defeat of Napoleon I, which sent him into exile on the Isle of Elba. The new King was Louis XVIII, the brother of the executed Louis XVI, who spent 23 years in exile before his return. On his death in 1824, he was replaced by another of Louis XVI’s brothers, Charles X.

He was unpopular for his draconian style of leadership and eventually he lost the throne after fierce fighting on the streets of Paris during the Trois Glorieuses in 1830, which led to the deaths of hundreds of revolutionaries.

The new King was Louis-Philippe I, who was a distant cousin of Louis XVI and it was he who ordered the construction of a triumphant column topped by a sculpture of the Génie de la Liberté (Spirit of Freedom) by Auguste Dumont, and with a crypt underneath for the bodies of the victims of the revolution.

It was inaugurated in 1840, when the bodies of the revolutionaries were accompanied to their resting place by a fanfare and a funeral march, composed and conducted for the occasion by Hector Berlioz. On a bronze plaque are the words:

“To the glory of the French citizens who took up arms and fought for the defence of public freedom during the memorable days of July 27, 28 and 29.”

By then the monarchy was really living out its last years and as the economic situation deteriorated in the country, so did the popularity of the King, who was overthrown in the revolution of 1848.

He was replaced by Louis Napoleon Bonaparte, nephew of Napoleon I, who ordered that the bodies from this revolution, nearly 200, should be added to those already there in the Colonne de Juillet. King Louis-Philippe’s throne was symbolically burned in the Place de la Bastille, which has been seen as a memorial to Revolution since 1789.

After the storming of the Bastille, the prison was taken down, stone by stone. There were then many projects for the remaining space. In 1803 Napoleon Bonaporte ordered it to be transformed into a square with a fountain at its centre. He wanted to have a huge bronze elephant in the fountain, and a plaster model on a wooden structure was put in place.

This was made famous by Victor Hugo in Les Misérables, as it is the place where the street urchin, Gavroche, takes refuge. However, the project was abandoned, and eventually the 52 metre-high Colonne was built there between 1835 and 1840.

During the restoration, the stained glass windows, stonework, wrought iron and floor mosaics have been brought back to their former glory and the structure has been made watertight.

Sadly, access to the top of the column by the interior staircase will not be possible due to safety regulations. When we went to press the Centre des Monuments Nationaux were not able to give an opening date but promised it would be this spring.