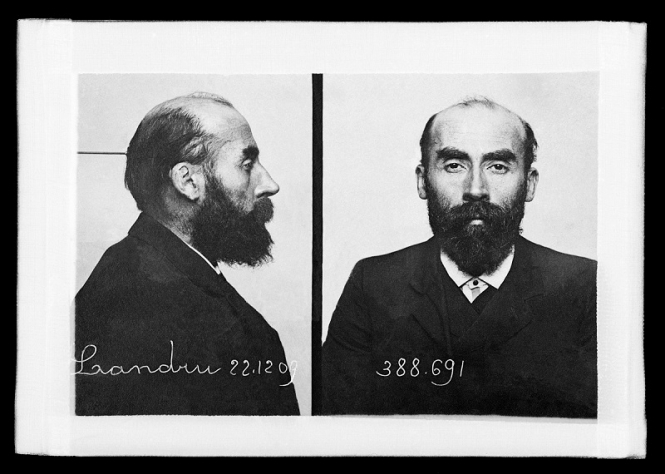 As the nights draw in and Halloween approaches, our fascination with the macabre resurfaces – and a new book by Richard Tomlinson could be required reading for those who enjoy a shiver of horror.

His book, Landru’s Secret: The Deadly Seductions of France’s Lonely Hearts Serial Killer, is a biography of one of France’s most notorious murderers, Henri Landru, who was dubbed Barbe Bleue (Bluebeard) by the press in the early 20th century.

The idea of writing the book goes back to the early 80s, said the author. “I was a student in Paris, doing a PhD on the 3ème République.

“I was going through old newspapers and looking at cases and old stories connected to attitudes towards women, and somebody said to me, ‘You should look at the Landru case’. That was the beginning.”

Henri Désiré Landru (1869-1922) was born into a devout Catholic family in Paris but grew into a drifter, working variously as a plumber’s accountant, a furniture salesman, and a toy maker’s assistant.

He married Marie-Catherine in 1893 and they had four children.

Landru drifted into petty crime, fraud, and confidence trickery, and spent much of his time evading the police.

From 1904 until the outbreak of the First World War, he was in and out of prison on various charges.

By 1914, he had already pulled off an ambitious hoax involving a fictitious automobile factory, swindled his wife out of her inheritance – and gone on the run, again.

But that was not the whole story.

During his crime-ridden life, he placed dozens of lonely hearts adverts, met numerous respondents to his adverts and – Mr Tomlinson believes – may have murdered dozens of women.

Despite initial police disinterest, a number of disappearances were investigated after relatives started to ask questions, and demand answers.

Landru was eventually arrested and charged with the murders of 10 women and one young man, the son of one of his female victims.

He denied all charges, and went to the guillotine in 1922 protesting his innocence.

“I read the first case – the disappearance of Jeanne Cuchet and her son – and I thought the case did not fit the prosecution’s version,” said Mr Tomlinson. “Years later, when there was an exhibition in Paris, the police released some pre-trial documents. When I read them I realised my theory might be true. There was plenty of material to research, and I decided to write a book about it.”

His research illuminated much about French attitudes to women, to justice and to the death penalty, which remained on the statute books until 1981. “What is striking is that Landru was in large part apprehended due to the women who investigated him, compiled a dossier on his activities and handed it to police.”

Landru was executed for the murders of 11 people whose names he had recorded in a small notebook.

“But there are several reasons why I think he killed more than 11 people.

“The main one is that the chronology of the disappearances, and another is the compelling set of testimonies, including a doctor who testified that he witnessed Landru dumping a package in Gambais, the village where he lived. The date he witnessed this does not tally, chronologically, with the police account.”

Mr Tomlinson said there is evidence to suggest Landru did not buy a notebook and then note down his murders, but jotted down a selection of his crimes.

“It was much later that police acknowledged Landru did not keep detailed notes in the carnet. Also, there are witnesses statements which can be proved.

“In a police record, it was shown he made contact with another 72 women who had disappeared, but the police did not trace them. That is not to say Landru must have killed these women but even the police have acknowledged that they did not know one way or another.”

There were reasons why the police did not track down and identify all the victims. “First, the list made life easy for the police. They had 11 names so all they had to do was find relatives. Landru had written his own charge sheet; if police could prove he killed these women, he would die.

“What is more shocking is these women’s lives did not matter in the same way that men’s lives mattered, partly because of the First World War and partly because French society suffered pronounced misogyny at the time.

“If Landru killed other women, so what? I think the police were simply overwhelmed, so they gave up.”

Some commentators have speculated that Landru was mentally unbalanced by the War, and Mr Tomlinson has found this train of thought interesting.

“The findings of the psychiatrists who examined and questioned him – twice – are mysterious. The first psychological assessment was carried out in 1904 after he faked a suicide attempt. That time, the doctor declared Landru was on the brink of worrying madness, but was responsible for his actions and was fit to stand trial.

“Fifteen years later, a second evaluation was carried out, by three psychologists, and their report is odd. It took them nine months to publish their conclusions.

“The report was highly edited. They stated he was ‘internally normal and responsible for his actions’.

This phrase excludes questions of criminality, said Mr Tomlinson, who thinks the medical team were under pressure from the investigating authorities to certify that Landru was fit to stand trial, when in fact he had lapsed into insanity.

“I can’t prove it but my own feeling is that Landru was obviously not sane at the time of the trial, and he crossed the line of madness after his first two murders. He was irrational after that point.

“He was out of control in the trial.”

At his trial, Landru continued to deny his crimes and ask what proof the police had for their charges, as if he had convinced himself of his innocence.

Landru might have convinced himself he was someone else, and believed he had never killed anyone, Mr Tomlinson said. “I think he genuinely couldn’t remember. Perhaps he blanked it all out.”

The Landru case is unique in its scope and complexity. Mr Tomlinson said he had not come across another case where the truth is as difficult to penetrate.

“To be clear, I don’t doubt that he killed the 10 women and the young man but how he murdered them and what he did with the bodies is a mystery.

“A century later, Landru remains an enigma. But I would say his utter hatred of women was the connecting thread between all his different murders.

“This is why, for me, it has such a contemporary resonance; because, in the end, women trapped him, gathered evidence against him, and testified at his trial. That, to me, is the heart of the case.”

Petiot (pictured left) was a mentally-ill criminal who obtained a qualification as a psychiatrist in eight months as part of an accelerated educational programme for First World War veterans.

During the Second World War he posed as the organiser of an escape route for Jews.

He murdered an unknown number of people, incinerated their bodies, dissolved them in quicklime or dumped them in the Seine.

He was eventually arrested and charged with murdering 27 people.

His claims to have killed 63 Germans and collaborators “for France” were dismissed, and he went to the guillotine in 1946.

Dubbed “The French Ripper” at the time, Vacher (pictured, right) is believed to have killed as many as 27 people, many of them adolescent farm workers.

A mentally unstable itinerant beggar, he tried to kill himself several times, attempted to kill a woman called Louise for refusing to marry him and apparently attacked and killed people at random.

When he was caught attacking a woman in Ardèche, he confessed to 11 murders, saying he had committed them in moments of frenzy.

Having been found sane enough to stand trial, he was condemned and had to be dragged to the guillotine to be executed.

Heaulme is serving several life sentences for a series of rapes and murders, including children.

The true number of his crimes is unknown as he has confessed to crimes he did not commit and denied crimes for which he has been found guilty.

Due to police incompetence and medical privacy issues, he was not caught until 1992.

Both are serving multiple life sentences for kidnapping and killing of several young women and girls.

Dubbed the ‘Ardennes Monster’, Fourniret was arrested in 2004 when his wife, Olivier, reported his crimes to Belgian police.

Extradited to France, they confessed to nearly a dozen kidnappings, rapes and murders, and aided police in locating and recovering victims’ remains.

Although Fourniret was the perpetrator, Olivier was complicit in his crimes, enticing the victims, witnessing their deaths and hiding evidence.

Lamare’s arrest in 1979 for stealing cars, and setting booby traps, as well as a series of attacks on women and murder, shocked France – because he was a serving gendarme when he was committing his crimes.

He pleaded insanity, and as a result did not stand trial but was committed to a secure unit for life.

At one point he was assigned to investigate crimes he had committed because, despite incriminating evidence, the gendarmerie couldn’t bring themselves to believe one of their own was capable of such acts.