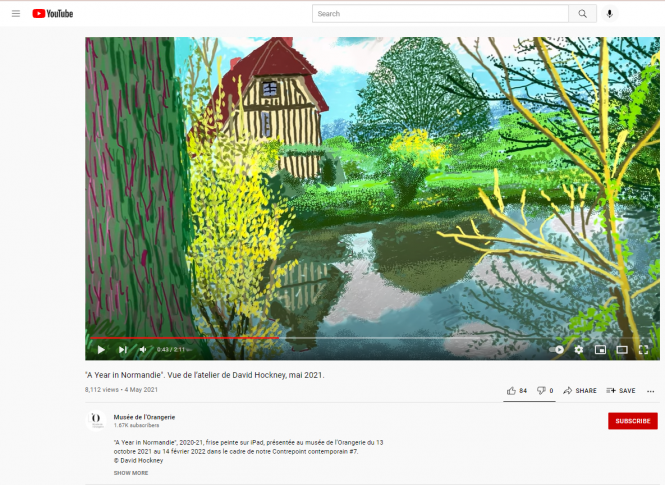 An exhibition of David Hockney’s works ‘painted’ via a Stylus and iPad to celebrate the arrival of spring at his home and garden in Normandy has gone on show at the Musée de l’Orangerie in Paris.

The British painter is said to have been inspired by the 70 metre long Bayeux Tapestry and the way it tells the story of the conquest of England by William, Duke of Normandy, in the 11th century.

It gave him the idea to depict the arrival of spring as a series of paintings, drawing his inspiration from the Pays d'Auge and general Norman landscape around his home.

Read more: Stitches in time: The history of Bayeux and its tapestry

Jean Frémon - a friend of the artist - said in a interview with The Connexion in November 2020: “He has a similarity with the great French painters. Like them, he has always been striving to produce images with a great clarity and visibility.
“In his works here we see how he has been fascinated by the Normandy light working to capture the look of the mist in the morning, or the sky”

His work started just before the national lockdown in France in March 2020 and in just a few weeks, he produced almost 120 images recalling the arrival of spring through light effects reflecting climatic changes and a brightly coloured palette.

His creations are ‘painted’ on the iPad, a technique he has been using for more than 10 years and then printed onto paper. As each work is printed far larger than the screen on which it was created it allows viewers to see every mark and stroke the artist made.

Hockney, 84, draws inspiration from his timber-beamed house, his garden, and the landscapes that surround it.

“A surge of colour with pop accents, a contrast between shadows and luminosity,” is how the Musée de l'Orangerie describes the works.