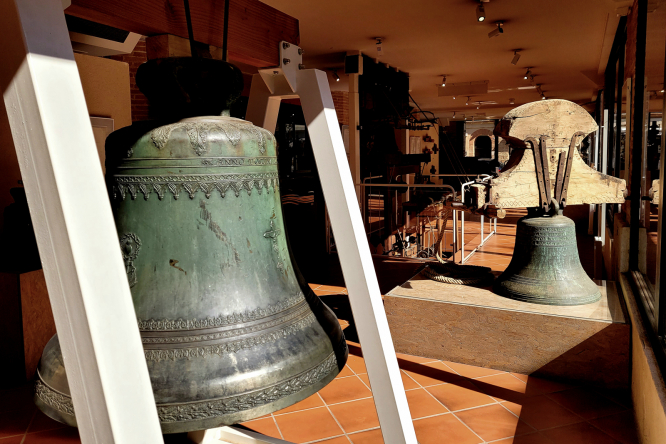 The museum is keen to demonstrate that the bell is classed as an idiophone and is a tool that has been used for centuries to perform a whole range of specific duties, taking on many different shapes and forms Pic: Musée d’Art Campanaire

The bell. It can be perceived as a very simple instrument. But simple can also surprise and the Musée Européen d’Art Campanaire in L’Isle-Jourdain in the department of Gers, proves it.

‘Art campanaire’ is the creation of bells; the how, why, what, and where. But it’s more than that. It’s about sound, purpose and communication.

“We are the only museum in France and Europe that presents an exhibition of bells and different sound producing objects,” said Bruno Delfino, a guide at the museum.

Divided into seven areas, it has a rich and historical bell collection with more than 1,000 objects, ranging from a tiny pendant bell weighing 6g to a foundry mixer weighing 2.6 tons and everything in-between.

‘Le carillon de la Bastille’ is one of the main attractions. When the Bastille was stormed, the dial was destroyed however, a clockmaker in charge of the maintenance managed to save the clock and its bells.

It was in a foundry in Normandy before being sold numerous times. Then it appeared in a restaurant in Paris before being auctioned off and sold again until finally, it was bought by the city of L’Isle- Jourdain and placed in the museum. It is now classified as a Monuments Historique.

The museum is keen to demonstrate that while the term ‘art campanaire’ usually focuses on the church bell and the carillon, the bell is classed as an idiophone and is a tool that has been used for centuries to perform a whole range of specific duties, taking on many different shapes and forms.

Whether it’s a rattle, a clock, animal bell or beach drum. A gong, a chime, jewellery or a handbell, their job is to unite or to deter.

The Horlogerie monumentale section takes us to what Mr Delfino describes as “the second surprise”.

An automaton clock made by the clockmaker Chenet-Blondin in 1860, with quite the bell ring. This intricate machine decorated his shop window and even indicates the phases of the moon, the hour in France and 21 other places in the world, the date and more.

He said: “Every morning and every night we wind it up. We’re closed on Sundays and Mondays but during the week she never stops… never. It’s an attraction for both adults and children.”

The concept of creating a museum to celebrate all things ‘art campanaire’ started in 1980 when Mr. Alain Jouffray and a team of researchers worked to bring together sound objects and various documents.

When donations and loans were made, the idea of setting up an exhibition to celebrate the pieces was born. On January 23, 1983, the new carillon of the Collegiate Church (nine bells) was inaugurated and the “A la découverte des carillons de Midi Pyrénées” exhibition was opened.

It was a huge success, and the decision was made to create a permanent Musée Européen d’Art Campanaire in the original halle aux grains.

L’Isle-Jourdain is well-known for its campanological tradition – specifically its small one-octave carillons and its wooden “bell towers” or “subrejougs” (more on them later) – making it the obvious location for the museum.

“We have all the objects thanks to the I.E.A.C (Institut Européen d’Art Campanaire),” added Mr Delfino.

It is thought that the bell was created as soon as man had fire and could make clay. The first metal bells date back to the Bronze Age and records from the 5th Century describe monks as bell founders. Bells are also mentioned in the Bible.

In the 16th Century automatic bell ringing was introduced and “dictated” life in the city, especially to sound “work time”. Religion and prayer were no longer the priority.

Nowadays, it can be perplexing to even consider a clock without a face, let alone a time when the hour would generally be told by the ringing of a bell.

Later, depending on whether it was a time of war or peace would determine how the material was best served – as a bell, a canon, or a coin.

In 1791, a decree had ordered the removal of bells for their bronze to make coins. Three years later, another decree ordered that only one bell per steeple should remain to ensure that the metal was put to the use of making arms. The one bell was to remain as an alarm system.

It is estimated that more than 30,000 bells were melted down during this period, and more would be destroyed during the wars.

More recently, stories of locals (and tourists) wanting to end the bell ringing in their village or town has made the news more than once.

Sadly, over time many traditions and rituals have either been toned down or disappeared completely.

One of them is ‘art campanaire’. So much so, that for the past twenty years the French adjective equivalent to the English “campanological” has been absent from the dictionary.

Knowing this, it is comforting to see other visitors enjoying the collection at the museum and making lots of wonderful sounds and playing music.

Arriving at the 23 bells learner’s carillon Mr Delfino said: “It’s an instrument of music in France. I like to play the Harry Potter soundtrack... with the bells it’s very, very Hogwarts.”

Provided by the Fondation des Pays de France, the carillon is an instrument made of two parts. An upper section used by the carillonneur to train without others knowing he was learning, and the lower section which has the keyboard made of wooden batons and foot pedals.

In every section of the museum there are bells and objects of all shapes and sizes. Many celebrating rituals and cultures from all over the world including Africa, Vietnam, Luristan, Egypt, China, and more. All made from a variety of materials such as wood, bronze, ivory and even gold, decorated with beautiful and intricate designs.

An impressive African mask and accessories adorned with bells demonstrate the diversity of the collection in the museum. “With the hands and body, it’s an expression of music,” continued Mr Delfino.

Admire huge instruments including a traditional gong, a wooden slit gong and a huge pate drum.

Mr Delfino said: “When we visit museums we are told ‘do not touch’. Here, we can. You can play a gong.”

In the Sonnailles (cowbell) area, culture again plays a huge part in the bell’s story, especially since animals have always been an extension of man’s traditions. The bells of an animal can shine a light on its origin and along with its accessories can assist in identifying it to the animal and the date of the bell.

Gifts and loans complete the collection, for example the museum was bequeathed approximately 150 subrejougs from the Meroc family. “It represents the museum. It’s our symbol because it’s from here,”

Canned wine expands in France
27 November 2021
More from Culture
More from Connexion
Get news, views and information from France
Join the newsletter
Subscribe to The Connexion