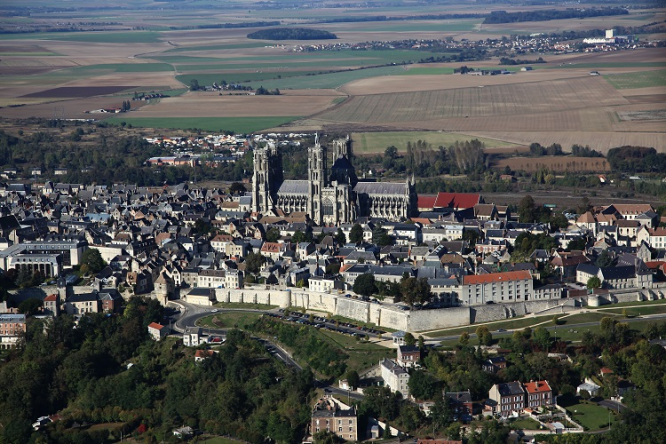 Aerial view of Laon, with the cathedral dominating the cityscape.
By Julia Faiers

The history of Laon and its cathedral is exceptionally dramatic even by medieval standards.

The town’s story is punctuated by murders, conflagrations, looting and civil disobedience. And all this before 1150!

The original cathedral church of the diocese of Laon, dating from the 10th or 11th century, was razed during the Easter Insurrection of 25 April 1112, after talks between the merchants of Laon and the bishop broke down.

The town bourgeoisie had drawn up a communal charter which permitted them certain freedoms.

Not liking the way this was going, bishop Gaudry (previously Lord Chancellor of England under Henry I) paid the king to issue a revocation of the charter, which incited the merchant class of Laon to seek bloody revenge.

They murdered bishop Gaudry in a variety of imaginative and gruesome ways depending on the source you read.

One says he was murdered in the cathedral crypt, others that he was burnt at the stake, while another describes him being ‘slain in a brawl’.

However he met his end, the mercantile mob set fire to his house (the episcopal palace), which quickly spread and reduced the cathedral to ashes.

The appetite for destruction spilled over to the peasants of Laon, who went on an enthusiastic pillaging spree, allegedly to avenge the murder of their bishop.

Not ones to miss an opportunity, three months later the clergy of Laon took relics rescued from their smouldering cathedral on tour throughout France and to England, where they raised enough money to start reconstruction work on the cathedral.

Laon’s booming economy coupled with Anselm of Laon’s famous school of theology and exegesis (the study of religious texts) swelled the town’s population, meaning the newly built cathedral, consecrated in 1114, was too small.

Construction of a larger building began by the late 1150s.

Most of the work was completed by 1230. A local quarry donated stone to build the choir, which unusually features a flat rather than a curved eastern wall.

Laon cathedral is one of the first generation of truly ‘Gothic’ cathedrals in France that includes Saint-Denis in Paris, Sens, Noyon, Senlis and Notre-Dame de Paris.

The stunning western façade appears well preserved, yet much of its sculpture is heavily restored due to damage sustained during the Franco-Prussian War in 1870.

An engineer blew up a powder magazine, killing 500 people and damaging the cathedral and old episcopal palace.

One aspect of the cathedral sculpture, however, escaped the chisel of the restoration team: two square medieval towers on the western façade morph into open octagonal structures, out of which stare 16 stone oxen.

Considering Laon cathedral stands on ground 100 metres above the flat Picardy plains, perhaps these engaging sculptures were a gesture towards the hardy beasts that dragged the stones from which the cathedral was built.

Nearly 800 years later, the oxen continue to watch over the Picardy landscape.

Also worth a visit is the church of Saint-Martin, formerly an abbey built at the start of the 12th century.

The church has some wonderful sculpture, including two stone tombs with effigies and a delightful 14th-century stone relief depicting the Nativity which was recently rediscovered near the choir.

For a truly ‘hidden history’ of Laon, visit the town’s subterranean tunnels, which have recently benefited from a major upgrade.

The tunnels were hewn from limestone first quarried in the 5th century to construct the town’s buildings.

The sprawling network of passages reveals incredible remnants of Laon’s past, including 40 million-year-old fossils and a 12th-century prison.

Above ground, seek out another hidden historical gem in the courtyard of the Musée d’Art et d’Archeologie de Laon – the Chapel of the Templars.

This dinky little church was built around 1140 for the Order of the Knights Templar to an octagonal plan based on the Holy Sepulchre of Jerusalem.

Archaeological work carried out in 2015 revealed 44 tombs in a cemetery around the chapel, and the remains of more than 70 individuals.

An anthropological study showed people buried here led privileged lives, as they were tall, had strong bones and enjoyed a rich diet.

Visit http://mappinggothic.org/building/1024 for a 360-degree panoramic view of Laon cathedral inside and out, with a detailed description and chronology

For a bird’s eye view of the town and its cathedral, watch this amazing film shot by drone and produced by the Office de Tourisme du Pays de Laon: