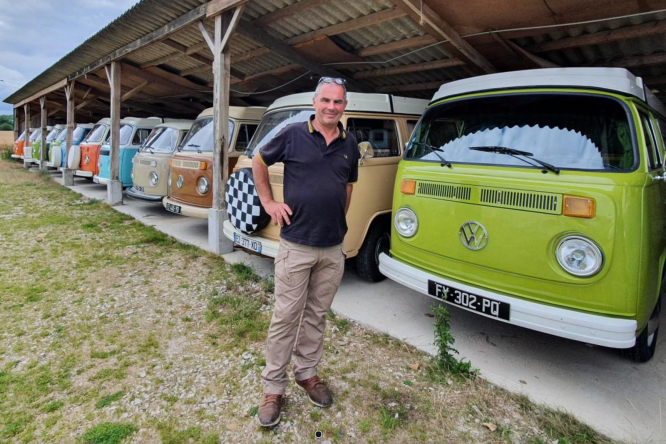 Bruno Verscheure of Only-Combi with his collection of VW camper vans Pic: Only Combi

VW Camper vans from the Sixties, Seventies and Eighties, called Combi VW in France, have never lost their appeal, and have become even more popular over the past five years; as private purchases, hires for holidays, publicity events and films or even for weddings.

Bruno Verscheure has a collection of around 100 at Armentières-sur-Avre, in the Eure, Normandy. Around 50 are available for hire whilst he has a team of three mechanics who restore the others, of which some are put up for sale.

He never expected his business, Only-Combi, to grow so quickly:

“I used to sell fruit and veg on the markets, and in my spare time I liked to tinker with old cars. We used to have a traditional camping car which we used to go to my son’s motorbike competitions. When he grew older, I hired out the camping car, bought a couple more and then in 2014 I bought Scoobi, my first VW camping van in memory of family holidays when I was a boy.

“I felt an instant rapport with the clients who came to rent it, they had the same idea of a holiday as myself, living from day to day, not worrying about tomorrow and enjoying the simple things in life. You have to be in the spirit of the holidays of the Seventies and Eighties when there were fewer motorways, and families from the north spent four days to go south.”

He abandoned the traditional camping cars and bought five more. The next year he had 15 ready to hire out and 30 by the third year. Now, he says, they have become so popular, it is far more difficult to get hold of them:

"The people who come to rent them are of all ages and come from all over France, and in non-Covid years we also have tourists from abroad.

“They are not for long-distance holidays, but for those who want to explore the local area. Some are over fifty years old and need gentle treatment. Top speeds are around 80-90km/hr. Though Covid-19 has meant more people are looking for holidays where they can be independent and avoid big crowds, I think there was already a move towards this kind of tourism which is slow and relaxed.”

They cost between €90-€150 a day to hire and the oldest models are the most expensive. Camping showers and chemical toilets are an optional extra.

In the winter there are fewer holiday rentals, but his business keeps going as films, TV shows and publicity events are keen to use the vans because of their enduring aesthetic appeal.

Vintage Camper is based in Bordeaux, with seven agencies throughout France. It rents out camper vans for holidays, but has also had great success with weddings and transport for company team-building day outs.

“They are certainly in fashion right now. They have an incredible look and they represent freedom,” says director Baptiste Moulucou.

For him, the consequences of Covid-19 have definitely meant more business: “We have many new clients, including some who would never have thought of this kind of holiday before. Several have been seduced and come back the next year.

“The fact that the vans are smaller than classic camping cars means you can go everywhere with them, discover the small back roads and really get to know a region.”

They attract all ages and many different types of people: “but we often have older clients with nostalgia for holidays spent with their parents when they were children.”

Chateau an hour from Paris available to part-own for less than €60
13 January 2022
More from Culture
More from Connexion
Get news, views and information from France
Join the newsletter
Subscribe to The Connexion