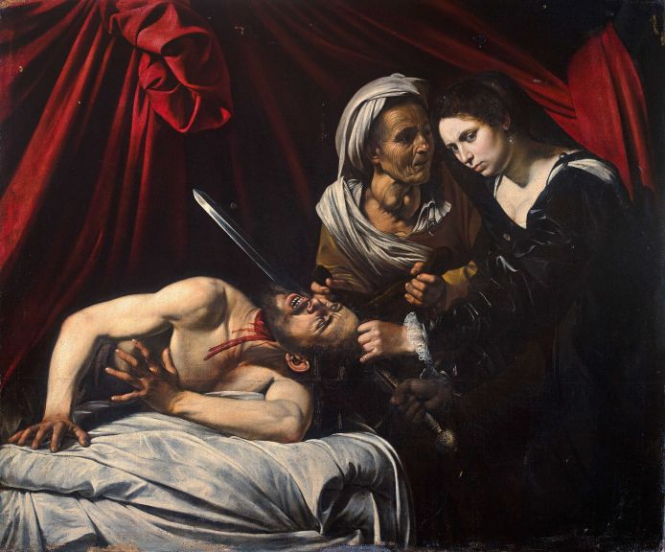 A painting believed to be by Caravaggio found under a mattress in a Toulouse house five years ago, was bought for €170million by a foreign buyer two days before going under the hammer.

The family that discovered the work, the second version of Judith Beheading Holofernes showing a macabre biblical scene, said they believed the work was brought to France by one of their ancestors, who was in Napoléon’s army.

The work was authenticated by France’s top Old Masters expert Eric Turquin, but some Italian experts believe it is a copy by Flemish artist Louis Finson.

Iphone or Apple Watch owners can now see a film just by waving their smartphone at a terminal inside the cinema, thanks to a new partnership between Pathé-Gaumont and Apple.

It works using information stored in the phone’s Apple Pay software, which serves as a virtualized contactless bank card. As the screening time approaches, the e-ticket appears on the phone screen,

so no need for physical tickets or even using a QR code, just the Pathé app.

Apple Pay is an accepted payment method in shops with terminals that accept contactless (about 70% in France). Similar systems for Android smartphones, such as Google Pay and Samsung Pay, are gradually being implemented in France.

Sales of French music to listeners abroad grew by 6.7% to €302m in 2018, according to the latest report by the Music Export Bureau which monitors the industry. 67% of this came through streaming platforms.

Toulouse-born Jain and rapper Master Gims enjoyed success while 25-year-old Tez Cadey (pictured left) – who was born in the US but studied engineering in Lille, achieved three billion downloads for his song Seve. It was number one in China after choreographed dances by the Chinese traffic police, the army and air force went viral.

Print publishing in France suffered a downturn in fortunes in 2018 according to industry figures just released by the National Publishing Union (SNE).

Overall sales fell by 2.52% and while some sectors such as comics, current affairs books, essays and children’s books sold well, literature slumped by 5.7%. One notable decline was in sales of spy and police procedural thrillers. Publishers’ turnover also fell by 4.38%.

The union blamed disruption from ‘social movements’ [gilet jaune protests] at the end of last year, as well as the ongoing battle for readers’ free time in the face of social networks, film and series streaming platform and video games.

5. Brittany town in the spotlight

British documentary photographer Mark Neville spent three years photographing inhabitants in and around the Brittany town of Guingamp (Côtes-d’Armor), focusing in particular on its football club supporters and farmers.

The resulting book, Parade (€30) was produced in collaboration with GwinZegal, which has been labelled a ‘contemporary art space of national interest’ by the Ministry of Culture.

The striking images, which capture the beauty of daily life in the town, as well as residents’ sense of community, were taken using bright flash in broad daylight or in black and white.

“All the photos I take have ‘community’ as a subject. Belonging to one family”, Mr Neville told newspaper Ouest France.

See samples from the book at www.instagram.com/marknevillestudio