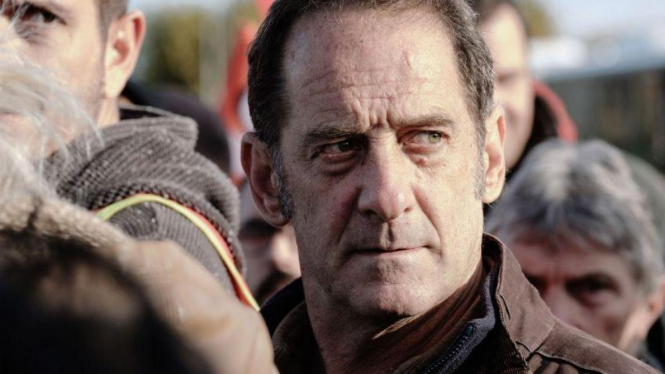 A German-owned car parts factory in Agen with 1,100 staff is under new threat of closure, despite its management team having agreed only two years prior that that employees could stay on for five years if they agreed to wage cuts and waived bonuses. Now the firm is citing impossible market conditions and wants to pull the plug. Cue union anger.

Union boss Laurent Amédéo is played with a brilliant sense of betrayal and  later desperation, by the intense and macho Lindon, who must attack not only the bosses but also a slowly drifting sense of defeatism amongst his own colleagues.

There is a lot of shouting at picket lines, and anger spills into violence (which further alienates the public and some unions members), making this a difficult film to watch at times.

However, what it does achieve is to bring a human story to the often clichéd notion of ‘the French on strike again’, and to cast light on modern labour relations. Many of the actors playing supporting roles are amateurs or actual factory workers, bringing Loach-like authenticity.

This thrilling Netflix drama is also now out on DVD. So binge-watch as Carole Bouquet plays a terrifying killer behind bars whose crimes are being copied by a new serial killer. But maybe she can help...