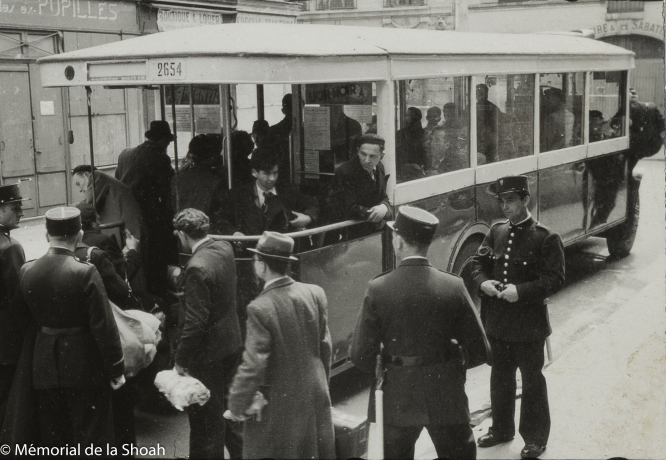 May 14, 1941. Outside the Gymnase Japy in Paris, Jewish men, escorted by French police, were made to board buses that would take them on to prison camps in France before they were transported to Auschwitz Pic: Mémorial de la Shoah

A collection of newly discovered photos, now being exhibited outdoors in Paris, sheds light on the first mass arrest of Jewish people in France by French police during World War Two - an event known as the Rafle du Billet Vert (Green Ticket Roundup).

The pictures were sent to The Connexion after our article on their discovery and the history of the Green Ticket Roundup, which you can read here. They are currently on display outside the Gymnase Japy in Paris.

On May 14, 1941, some 3,700 Czech and Polish Jews in and around Paris responded to a summons in the form of a green ticket and went to police stations to have their statuses verified.

On arriving, they were arrested and sent to prison camps in France. From there, the majority were shipped to Auschwitz where they were killed.

The Mémorial de la Shoah, a Holocaust museum in Paris, recently acquired five photo contact sheets containing 98 images of the event, showing for the first time the emotions and distress of the Jewish people.

“Although the press reported on it at the time, the official images were dehumanising and humiliating for these foreign Jews,” The Mémorial de la Shoah wrote in a press release about the images.

“The emotion and distress of these families, as shown in these photos, are a rare illustration of the Shoah in France.”

7 French expressions to use when the weather is bad
15 September 2021
More from Culture
More from Connexion
Get news, views and information from France
Join the newsletter
Subscribe to The Connexion