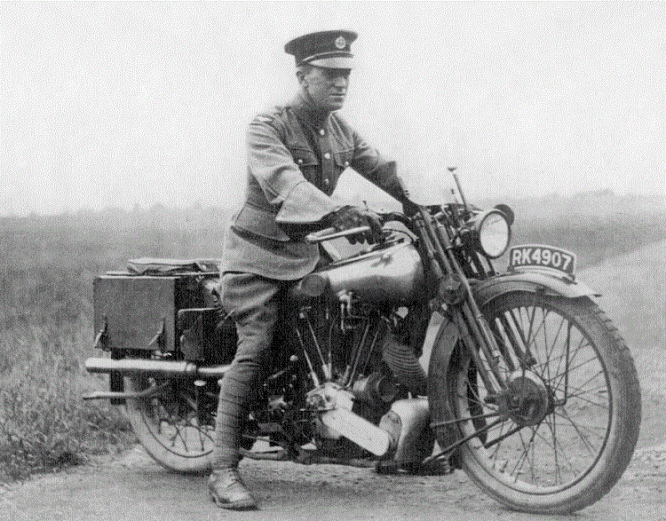 TE Lawrence with his 1927 SS100
By Brian McCulloch

A French luxury motorbike company has created an updated handbuilt version of “the Rolls-Royce of motorcycles” made famous by Lawrence of Arabia.

British-made Brough Superior bikes were never turned out in large numbers and were expensive, but their riders and owners included TE Lawrence and George Bernard Shaw.

Lawrence (“of Arabia”) owned eight Broughs successively, all but one being versions of the Brough Superior SS (“Super Sports”) 100, the company’s most famous model.

He named all his SS100s “George”  and was riding “George VII” when he died in Dorset in 1935 while trying to avoid two boys on bicycles who had been hidden in a dip in the road.

George VIII (pictured below) was being built for him at the time.

George Brough, the owner of the Brough Superior company, tried to restart production after World War Two, but rationing meant it was hard to get good quality materials.

The remaining models from the pre-war period now sell for hundreds of thousands of euros at auction.

A motorcyclist fascinated by the model’s history, Mark Upham, bought the rights to the Brough Superior name in 2013 and approa­ched Thierry Henriette, who runs a motor engineering design consultancy in Toulouse called Boxer Design.

He made a prototype, inspired by the Broughs of old, and the decision to start selling them was taken in 2015.

It was a success and, in 2018, Mr Henriette bought the rights to build the bikes and sell spares and accessories.

He said: “Each part is made from a piece of metal or a sheet of leather in our workshop. After it is assembled, the person who made it signs it.”

With prices starting at €64,000, most buyers are well-off. “But there are also very passionate people who do not have so much money who make sacrifices to buy one of our motorbikes.”

The modern bikes have little technical resemblance to the old bikes, most of which had a gear lever which had to be changed by hand, instead of the foot change levers now used.

They keep the engine layout of a large capacity twin cylinder motor, which gives a distinctive sound, “a bit like a Ducatti but different – you can recognise the bike by the sound,” said Mr Henriette.

He rode a vintage Brough once, and said it was nothing like driving the modern bikes, which meet the latest regulations and have safety features such as ABS brakes and anti-dive front forks, making the machine easier to control under hard braking.

The team of 25 who build the bikes are French and Mr Henriette said they are proud to show off the country’s technical and luxury manufacturing skills, as well as taking on George Brough’s philosophy of excellence.

They all have motorbike licences and are expected to go out and test the machines as they are built.

The firm’s British links are not just with the one name.

Brough Superior has signed with Aston Martin to produce a 100-edition track bike, priced €108,000, the first time Aston Martin has put its name on a motorbike.

France used to have a number of motorbike manufacturers but, before Brough Superior, the last one, Voxan, shut down in 2010 after 15 years producing motorbikes in the same price range as large Japanese rivals.

Mr Henriette is confident Brough Superior, with its focus on the luxury end of the market, will survive.

“We have the capacity to produce 120 a year and are set to produce around 65 this year, but we are strict and only start making a bike once it has been ordered by a customer.

There are very few motorbikes at our price point, and those there are have a very different design philosophy.

“British luxury cars, especially Rolls- Royce, Bentley and Aston Martin, have survived in spite of being expensive and I’m confident we will too.”