Magnificent men – and women – in their flying machines 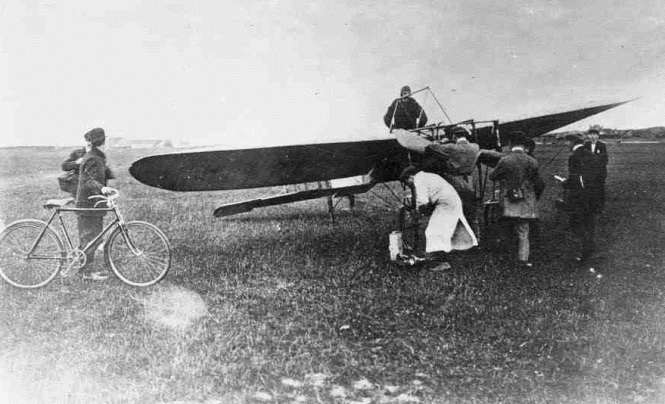 From the Montgolfier brothers’ hot-air balloon in 1783 to Concorde’s first flight in 1969, the French have always been at the forefront of aviation.

It is something of a national passion.

The Wright brothers, in 1902, may have been the first to fly in a machine that could be controlled in all three directions (tilting forwards and back, rolling side to side, and twisting left to right) but French aviator Clément Ader was the first to achieve motorised flight.

In the years leading up to the First World War, aviation records were constantly being set and then smashed by competing aviators worldwide.

The Aéro-Club de France (formed in 1898) was offering prizes for each new development and in 1906 the first air shows were held.

In 1908, Thérèse Peltier became the first woman to fly solo, and Henri Farman made the first flight between two French cities (Bouy to Reims) in the same year.

In 1909, Louis Blériot broke the distance record by flying 47km in 67 minutes, and Louis Paulhan reached a record altitude of 150 metres.

That same year, Blériot flew across the Channel in 37 minutes, and the world’s first international airshow, near Reims, attracted about 1million visitors.

In the heady years before the First World War, a flying school was opened in Pau, and more airfields were constructed.

In 1910, Elise Deroche was the first woman in the world to get her pilot’s licence; the first flight of a seaplane was made by Henri Fabre; the second Paris-Le Bourget airshow took place – and in 1911, Robert Grandseigne accomplished the first night flight. In 1913, Adolphe Pégoud looped the loop for the first time.

Aviators worldwide were starting to see the possibilities for passenger services, postal deliveries and cargo as well as pure sport. But with the outbreak of war, a deadlier purpose emerged.

At first planes were mainly used for reconnaissance missions, and in 1914 female pilot Marie Marvingt established the first air ambulances, but as the war continued, fighter and bomber aircraft were developed. The British founded the Royal Air Force.

Aerial combat, bombing, and shooting planes out of the sky were all developed during those four years of war. By the end of it, a large number of trained pilots found themselves out of a job.

By the time the Second World War began, air services of all sorts were well-established. Post-1945, air travel began to become available to the general public rather than just the very rich.

Less than a century after motorised aircraft were developed, low-cost airlines like Easyjet and Ryanair had turned it into an accessible travel option for everyone.

The Little Prince of pilots

Antoine de Saint-Exupéry (1900-1944) became a pilot during his military service in 1922 and in 1926 was employed to fly airmail between Toulouse and Senegal.

In 1929, he went to South America to develop postal services to Patagonia.

He was also wrote novels and poems inspired by his aviation experiences, producing Night Flight in 1931.

During the Second World War he served in the French Air Force, but after the fall of France in 1940 went to New York to try and join the US Air Force and to persuade them to enter the war.

In 1942, still hoping to join the US Air Force, he wrote his iconic novel Le Petit Prince. Still only in his early 40s, his health was failing and he was considered too old for active combat but in 1943 was finally assigned to a combat unit in the Mediterranean.

His final flight, in 1994, was a map-making mission over France.

What happened is a mystery, but in 1998 his identity bracelet was found in the sea near Marseille and in 2003 his plane’s remnants were also identified.

Theories about his death still abound however, some people even speculating that he didn’t die when his plane crashed but was taken prisoner.

Toulouse, as the centre of French space exploration, and a major French aviation hub, is an ideal destination for enthusiasts.

The highly-rated Cité de l’Espace is unmissable, and two newer attractions are also now tempting destinations: the Musée Aeroscopia just to the north of the city, and L’Envol des Pionniers museum to the south-east of the city.

There are aviation shows all over France, however, including the Paris Air Show at Le Bourget, and the Temps des Hélices at the Aérodrome de Cerny-La Ferté-Alais (both in June) plus the Paris-Villaroche Air Legend airshow held at the Melun Aerodrome in September (an hour south of Paris by car).

One of the only free airshows in France, ‘Légend’Air’ attracts 25-30,000 people a year, and includes a massive vintage vehicle exhibition.

“We are determined to maintain it as a free event,” says Daniel Gizardin, president of the Legend’Air association, which has 80 members and relies on a further 165 volunteers to run the show.

“We don’t want it to be elitist, we want people to come and talk to the pilots, get up close with the planes.

“We are 75% financed by our partners, and the rest comes from catering and sales of souvenirs.”

The association hosts around 40 pilots, putting them up in their own homes. “It’s friendly, convivial, there is no separation between the organisers, the public and the pilots. We want to attract people, especially young people, who might go on to have a career in aviation.”

After a 43-year career in aviation engineering, he says flying remains mysterious; the aviation world is full of passion and excitement. “It’s Icarus, it’s out of the normal world. We fly! It’s magic!” he said, although he is not a pilot himself.

“We want people to know that it’s accessible, it’s really not more expensive than sports like riding or golf or autosports. It isn’t just for billionaires.”

This year the theme is British aircraft and even the vintage vehicles will largely be British-built. “Rolls Royce remains a major manufacturer of aircraft engines, and, of course, we had to get a Spitfire.”

There are various categories of microlights, extremely lightweight aircraft with small engines, designed to carry one or two people.

A fixed-wing microlight looks similar to a small plane. It has conventional wings, a propeller on the nose at the front, and two seats side-by-side enclosed by a lightweight cabin.

The engine is in the nose, the fuel is behind the seats and there’s enough space to carry a modest amount of luggage.

There the comparison ends. Flying in a large passenger aircraft is like sitting on a tube train, but when you take your seat in a microlight, you enter another dimension entirely.

For a start, the doors are at ground level, and it is incredibly flimsy; there are gaps round the doors and you are practically sitting on the plastic fuel tanks.

The pre-flight safety checks are the same as for any flight... but unlike a large airliner, when the engine started the whole machine began to vibrate.

Philippe (the pilot) asked if I was frightened. Strangely enough, I was not. I was fascinated and thrilled. I was just ready for the ride. I grinned, he nodded and off we rattled down the runway.

The wheels left the tarmac and we were soaring over the airfield in complete calm. Of course the engine was still thundering away, but with the headphones on it is not that loud and once you are off the ground the vibrating stops.

There you are like a bird, floating along in the sunlight looking at the landscape below; the main roads snaking through the hills, the woods, fields and farms spreading into the distance.

We flew over a couple of castles and some villages and Philippe swooped around a bit. When a microlight turns, it banks so you end up practically on your side, but you are wearing a seatbelt so it actually felt perfectly safe.

The unexpected thing was the peace. A couple of thousand feet in the air there are no white lines, no traffic lights, no speed radars or police cars, no-one pops their heads round the door, the phone won’t ring, you won’t get an email.

Even though it was a brilliantly still, sunny day the machine bumped around as it hit different patches of air.

Not more than a car going over a badly surfaced road, but just enough to make you realise that the air is not actually thin at all. It is quite solid. Lumpy, but solid.

Turning back towards the airfield in another long, elegant swoop, we began to descend, and I was surprised to notice that we had actually been in the air for the best part of an hour.

Philippe lined the nose of the microlight up with the white line down the middle of the runway and very soon we were rumbling along the tarmac back to the hangar, where a couple of people were hanging over the gate to watch us arrive.

So did I enjoy my ‘baptême de l’air’? Reader, I joined the flying club!

You can learn to fly

There are small airfields all over France and most offer microlight flights for around €75 per hour. To find one, search Pages Jaunes for ‘aeroclub’ in your area.

You can join a flying club for around €100 a year, and joining the Fédération Française Aéronautique costs as little as €37 for a year, depending on what insurance you buy.

You can get a pilot’s licence before you are old enough to drive in France. The Fédération Française Aéronautique gives out grants to help them pay for it, €335 for the Brevet de Base and €670 for a PPL.

The Brevet d’initiation aéronautique (BIA), which includes basic flying theory plus a flight, can be passed at any age, although in practice the youngest children to pass it are usually in collège.

The Brevet de Base can be obtained from 15 years old, and allows you to fly solo, for up to 30km around the departure aerodrome, and further with pre-flight permission.

To get it you need to pass the medical, theory, radio and practical tests plus have six hours dual-control flying, four hours solo and 20 landings.

The Licence de Pilote d’Avion Léger can be taken from 17 and allows you to fly a single engine aircraft all over Europe.

To get this you need to pass the usual tests plus have 15 hours of dual control flying, six hours’ supervised solo flying, with three hours’ solo over countryside, and at least one flight of 150kms which includes at least one landing at another airfield.

The Licence de Pilote Privé (PPL) can be passed from 17 years old and allows you to fly anywhere with or without passengers, as long as you are not paid.

To get it you have to pass all the usual tests, plus have 45 flying hours, 25 hours of dual control and at least 10 hours of supervised solo flying.

This allows you to fly in weather conditions allowing you to see where you are going (Visual Flight Rules). In order to fly in Instrumental Meteorological Conditions’ (ie. fog etc) you have to get a further ‘Instrument Rating’ qualification.

After that, the sky is the limit...