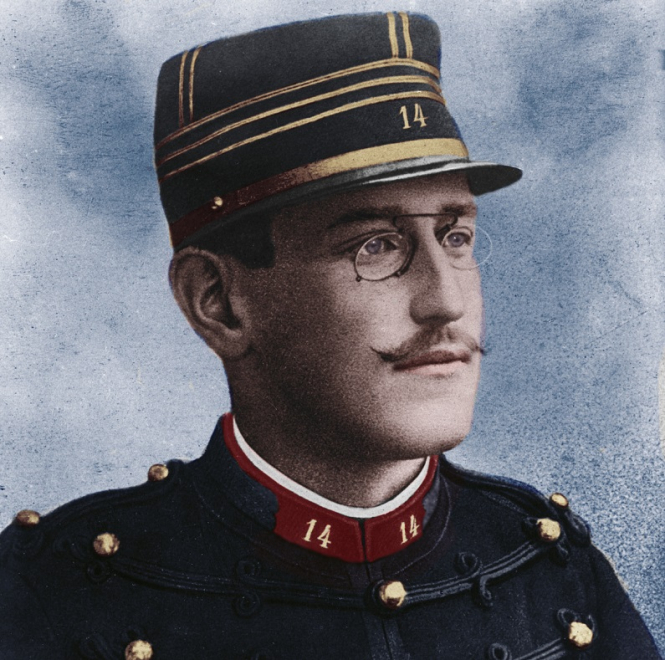 The Dreyfus Affair was a political scandal that shamed France for decades. It began in 1894 when Army captain Alfred Dreyfus was arrested for spying, and officially continued until 1906 when he was finally exonerated.

But it continued for many years afterwards. The right-wing press continued to attack his reputation, and his Jewish ancestry – even after his death in 1935 – until anti-Semitism in France was made illegal after the Second World War.

Author and historian Georges Joumas, whose book Alfred Dreyfus, Citoyen came out last year, notes that the only legal defence against any kind of discrimination, racism or anti-Semitism at that time was to sue for defamation.

It effectively meant that the press were free to print articles based on racial and religious discrimination. And they did. L’Affaire Dreyfus, as it was known, made the front pages worldwide, and France was especially condemned by the British press.

Alfred Dreyfus (1859-1935) was an artillery officer from Alsace. He came from a wealthy family of Jewish descent, and was commissioned in 1880 after graduating from the elite Ecole Polytechnique military school in Paris.

He then spent two years in specialist training at the artillery school in Fontainebleau after which he was assigned to a regiment. By 1889, he had been promoted to captain.

He married Lucie Eugénie Hadamard in 1891, and they had two children. He enrolled in the Ecole Supérieure de Guerre and, having graduated with an honourable mention, became a trainee in the Army’s General Staff headquarters, where he was the only Jewish officer.

In 1894, French counter-intelligence learned that information about new artillery parts was being passed to the Germans by a spy on the General Staff.

Suspicion swiftly fell on Dreyfus, and he was arrested.

In January 1895, he was publicly stripped of his rank. In the courtyard of the Ecole Militaire, his rank insignia, buttons and braid were cut off his uniform and his sword was ceremonially broken.

He is reported to have shouted: “I swear that I am innocent! I remain worthy of serving in the army. Long live France! Long live the army!”

He was transported to Devil’s Island in French Guiana to begin a life sentence.

The affair gripped the public imagination. The right-wing press had a field day, using Dreyfus’s conviction to whip up anti-Jewish sentiment.

But friends, family and supporters fought back, writing letters and using all their influence to get the case re-opened.

Two years later, a new intelligence chief, Lieutenant Colonel Georges Picquart, reported he had found evidence implicating Major Esterhazy of the crimes for which Dreyfus had been convicted.

The army tried to cover up the brewing scandal – but it was leaked to the press.

Esterhazy was secretly acquitted at a court-martial and fled to England. Dreyfus’ supporters redoubled their efforts.

In 1898, Emile Zola wrote his famous open letter J’Accuse...! which was printed on the front page of L’Aurore newspaper.

Addressed directly to then-president Félix Faure, it accused the government of anti-Semitism and the unlawful imprisonment of Alfred Dreyfus.

It pointed out judicial errors and lack of evidence in the case.

Even Oscar Wilde – by that time, broken, penniless, and in the last year of his life – became embroiled in the affair having met Esterhazy in a cheap drinking den in Paris.

“Across the whole of Europe, and even the world, there were real repercussions,” Mr Joumas said.

“Other countries didn’t understand the French attitude. In the UK it provoked massive reaction, and all the leading newspapers denounced French injustice and discrimination.

Esterhazy was tried again in 1899 – but despite mounting evidence of his guilt he was acquitted a second time, much to the fury of the legions of ‘Dreyfusards’ (Dreyfus supporters).

Public opinion by this time was at boiling point and France was widely condemned in the foreign press.

Bowing to pressure, new president Emile Loubet granted a pardon and Dreyfus was released from prison.

Accepting the pardon meant it seemed Dreyfus was admitting guilt – but the truth is his health had suffered and it was unsure how much longer he would have been able to survive in prison.

Arriving back in France he said: “The government of the Republic has returned my freedom. It is nothing to me without my honour.”

He had to wait until 1906 for a military commission to formally exonerate him and restore his honour.

The following day he was readmitted into the army at the rank of major. A week later he became a Knight of the Légion d’Honneur and, by October that year, he was in command of an artillery unit at Saint-Denis. The Affair was over.

Or so it seemed.

The right-wing, anti-Semite press continued to harass Dreyfus, accusing him in articles almost daily of being a spy, a traitor, and worse.

“Dreyfus himself felt that the army had not given him the rank he would have achieved (colonel or general) had he not been wrongfully incarcerated, and made repeated attempts to have the situation rectified, but by 1907 he had had enough of the army,” Mr Joumas said.

Dreyfus retired from active duty, only attending occasional training weeks, but signed up again at the outbreak of the First World War.

He occupied himself with reviewing military books and lobbying in other high-profile miscarriages of justice.

“But all the time, the anti-Semite press was agitating against him. Today, France has very strong laws against all forms of discrimination, anti-Semitism in particular and that is very much a result of the Dreyfus Affair. But at that time anti-Jewish feeling was rife, and people didn’t even bother to hide it.”

J’Accuse author Zola died in 1902. In 1908, it was decided to transfer his remains to the Panthéon. Dreyfus was invited to the official ceremony. This infuriated the right wing (the ‘anti-Dreyfusards’) and one of them, journalist Louis Grégori, who was also at the ceremony, shot Dreyfus twice.

Luckily he was only hit in the arm. But Grégori, arrested on charges of attempted murder, was acquitted following his arguments that it had been a crime of passion.

“It didn’t stop there,” says Georges Joumas of the harassment. “The extremist group ‘Action Française’ managed to get into his apartment building, with the aim of kidnapping him, putting him back on trial in a kangaroo court, and executing him themselves. Twice that happened.

“He was always being hunted, always a victim, it never ended.

“The right-wing press were obsessed, they were completely out of control, with no reins to stop them, they were publishing anything, even complete lies.”

One of the ironies of the affair is that Dreyfus was not particularly religious and nor were his family.

“He wasn’t a practising Jew, but he became visible, became a symbol of Jews in France against his will.

“He was a literary man; restrained, reserved, who listened a lot and spoke only when necessary.”

In 1914, when he was already 55, Dreyfus rejoined the army despite his ongoing bad health. He was put in charge of inspecting and maintaining the defences north of Paris, but after the Battle of Verdun in 1916, he requested deployment to the front line.

So, in 1917, he took part in the bloody Second Battle of the Aisne, emerging miraculously unscathed.

He was then sent back to Verdun to supervise the dangerous clean-up of unexploded ordnance. He fought at Nancy and finally at the age of 59, he was sent to Orléans to manage the artillery.

After the First World War he retired from the army and from public life. Many of his friends had died in the war and he was tired – but the regular press attacks continued.

“In 1931 for example, a play detailing the miscarriage of justice suffered by Dreyfus was cancelled after the first few performances because the police could not or would not prevent ‘Action Française’ activists heckling and attacking the actors.”