More French than the French... in India 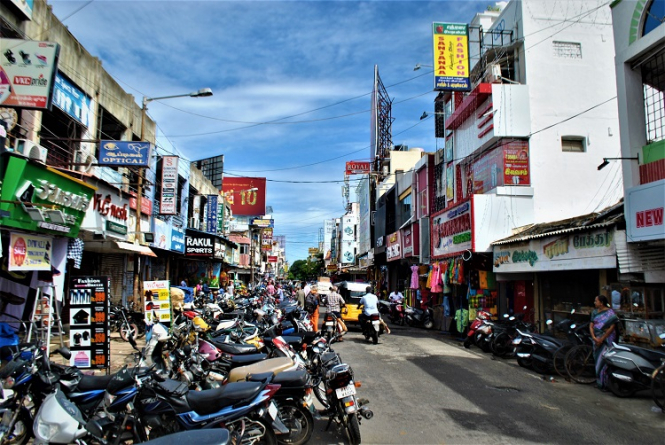 Away from the touristy Ville Blanche, Puducherry is much more like a bustling Indian town
By Len Williams

It Is a warm evening and I watch a handful of older gentlemen playing pétanque in the grounds of Eglise de Notre Dame des Anges.

They will head home for a glass of pastis later, while I visit a local restaurant and order onion soup to start, followed by steak-frites and a glass of red.

A quintessentially French scene –except for the location. I’m on the Bay of Bengal in the Indian city of Puducherry (still widely known as Pondicherry or, affectionately, Pondy).

I’ve been intrigued by the city since first reading about it in Yann Martel’s novel Life of Pi, later filmed by Ang Lee and partially shot here.

It is in the southern state of Tamil Nadu but, at first sight and if you squint a bit, you could almost be somewhere in the south of France.

The east-facing seafront boulevard Avenue Goubert is closed to traffic in the evenings and in the mornings a couple of cafés serve croissants, baguettes and café au lait.

My guide, Bhiswajit Binak, tells me the French used to call it La Promenade des Anglais.

Heading west from the seashore, you enter the “Ville Blanche” where the colonists lived – this is separated by the grandiose-sounding “grand canal” (in reality, an open-air sewer) from “la Ville Noire”, where Tamils traditionally lived.

I cringe at the racist-sounding language, but Bhiswajit tells me that the Tamils chose the names.

Ignore the women in saris in the Ville Blanche and you could almost be in France, with streets laid out in a grid around a pretty central park, French names painted on blue enamel, and villas lining the pavements, their walls painted in warm pastel oranges, greens and blues.

It has a monument to Franco-Indian soldiers who died for la patrie, there is a mairie, an Alliance Française, Catholic churches, and a cathedral, too. The police even wear képis, that classic hat which French gendarmes abandoned decades ago.

However, head out of the wealthy, touristy Ville Blanche and it is a different world.

A couple of streets west and the roads are hectic with auto rickshaws and scooters, flashy neon and billboards, and most of the old-fashioned buildings have been torn down and replaced with modern constructions.

I wonder if the town has retained any of its Frenchness beyond a handful of decaying buildings.

The truth is, the common man neither knows nor cares about the French legacy.”

He sighs, noting that few locals speak French any more. All the same, France’s influence goes a little deeper than a handful of old buildings and police uniforms.

The French love of wine means families in Pondicherry drink alcohol together at mealtimes, something which would not happen in the rest of conservative Tamil Nadu. There is a kind of Creole cuisine, which combines French-style cooking with Indian spices.

Pondy also has an efficient and effective état civil, meaning most people have birth certificates.

“We’ve also inherited French people’s hypochondria,” he jokes. “People from Pondicherry go to the hospital even if they have a cold. Anywhere else in India, they would just go to work.”

French rule ended in 1954, but (Pandit) Jawaharlal Nehru, India’s then prime minister, allowed the French state to continue administering the town for almost a decade longer.

During this time, France gave locals the possibility of accessing citizenship. Some, especially those from traditionally lower castes – India’s complex system of social stratification – jumped at the chance of moving abroad.

Once in France, many struggled to find work and the men often ended up working for the army.

On retiring, they received a French pension and returned to India very well-off by comparison.

“We Indians love categorising people,” my guide Bhiswajit laughs. “So much so, we made a new caste from the Franco-Indians. They’re more French than the French and follow French customs religiously.”

Whether that is playing pétanque, going to mass at Catholic churches, speaking the “language of Molière” at home, or voting in French elections, they (and their children) retain the closest links to their adopted country.

In what I’m told is typically Indian style, these French citizens are now known as “soldats”, effectively a new caste and social class. It’s a striking example of India’s ability to absorb bits and pieces of other cultures.

I had been sceptical about whether Puducherry would still feel French but, especially in the Ville Blanche, the historical legacy is still evident.

This is largely thanks to people like Ashok Panda, co-convenor of the local chapter of INTACH – the Indian equivalent of English Heritage.

An architect by training, he said it had been a slow process but many of the town’s buildings had now been listed, making it difficult to modify them.

INTACH has worked on the conservation of numerous buildings in the past 20 years and helped restore government buildings in their original style. It is currently working on restoring Pondy’s lighthouse.

It also works with private citizens to restore homes and turn them into “heritage hotels”.

I visit one and it is all bougainvillea cascading over whitewashed walls, cane chairs and arched walkways around an atmospheric courtyard.

“We do it to maintain our heritage and our culture, and it also has tourism benefits,” said Ashok.

But ultimately “it is about making the city more beautiful”, an ambition it is hard to find fault with.

If you came to Pondy expecting a purely Gallic experience you would be disappointed, but its blend of Indian and French styles makes for a memorable and enjoyable stay.

Greeks called it Poduke, the French Pondicherry... today it is Puducherry

A settlement close to the modern-day city was a trading post known to Greek and Roman traders as Poduke. Excavations in the 1940s find Roman coins and amphorae

A succession of European colonial powers arrive. First the Portuguese, then the Dutch, the British and the French

The territory changes hands between France and Britain several times, until France sets up an enclave

1954–present: Now called Puducherry, it is an Indian Union Territory