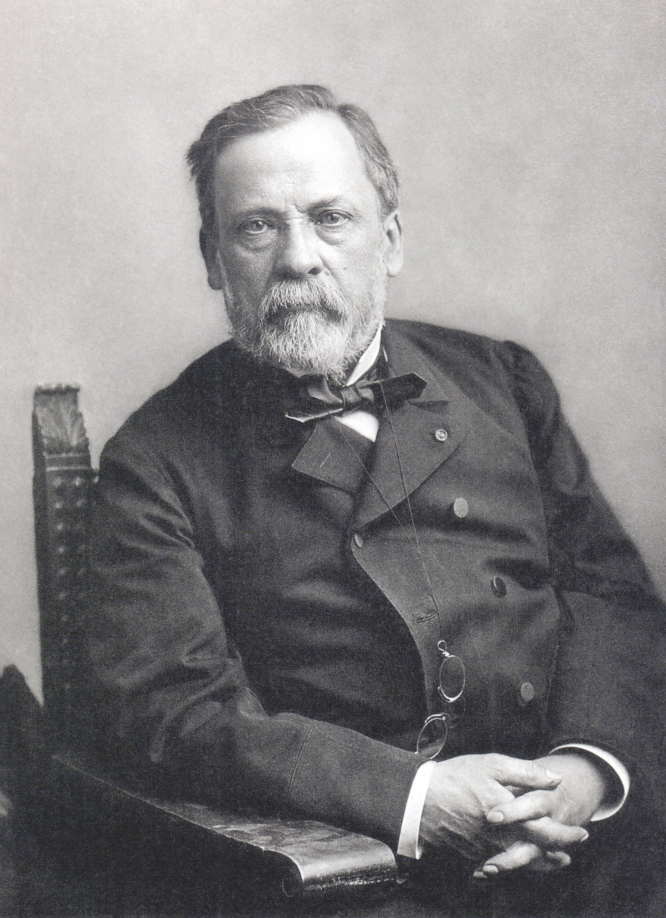 Louis Pasteur (1822-1895) remains one of France’s most famous scientists. Among his numerous achievements, he created the first vaccines for anthrax and rabies, invented a way of killing bacteria in milk and wine (pasteurisation), reduced deaths from puerperal fever, and was instrumental in establishing the germ theory of disease.

He was also an early “media giant”, promoting himself and popularising science. His Pasteur Institute remains a pioneering hub of scientific research.

Pasteur was born in Dole, Jura, into a poor family. His father was a tanner and he did not start school until 1831 when he was almost nine years old. Initially, he was not an outstanding pupil, preferring to spend his time fishing, and sketching portraits of his family and friends. He finally passed his Bac S (baccalauréat scientifique) in 1842 and went to the Ecole Normale Supérieure where he got a degree in science (1845) and then worked as a lab assistant while researching theses in chemistry and physics.

In 1848, he got a job teaching chemistry at the University of Strasbourg, where he met and married Marie Laurent in 1849. They had five children together, three of whom died of typhoid in infancy.

In 1854, he became dean of the science faculty at Lille University, where he began studying the process of fermentation. It was not newly discovered; everyone knew how to use it to make beer, wine and bread. But at that time no one had a scientific explanation for how fermentation worked, what mechanism caused it. (The answer is yeast, by the way.)

Pasteur was by then a long way from the boy who had enjoyed sketching and fishing. He had developed into a workaholic who kept punishing hours (getting up at 5am and going to bed at 9.30pm), and whose research and studies were rigorously disciplined. When he got a promotion, becoming director of scientific studies back at his alma mater in Paris, he introduced a whole series of strict reforms in an attempt to raise academic standards. Exams were tougher, students were threatened with expulsion for smoking and were required to eat a universally disliked mutton stew once a week.

In 1887, he established the Pasteur Institute in Paris, and became its director until his death in 1895. One of Pasteur’s greatest strengths was his interest in proving or disproving other scientists’ theories. He showed, for example, that germs could not spontaneously develop in sterile liquids. They would only grow in contaminated liquids. The logical conclusion, using pasteurisation – ie. heating beer, wine and milk to between 60 and 100 degrees centigrade to kill most germs and keep those drinks fresh for longer – is still used today. As is the practice of storing heat-treated, uncontaminated food in sealed, sterile containers.

Having established that decomposition of foodstuffs was due to external micro-organisms which could be killed by heat, rather than to spontaneous organisms integral to food, he turned his attention to the human body and showed that many diseases were also caused by micro-organisms entering the body and causing infections.

As part of his investigations into chicken cholera, he isolated the bacteria which caused the disease and discovered how to deliberately infect chickens with it. One dose, however, turned out not to work. Although the chickens became slightly ill, they recovered. On investigation, the dose was discovered to be weaker than normal. Deeming the experiment a failure, he re-infected the same chickens, but none became ill and he realised that they were immune to the bacteria. Giving them a very weak dose of it had effectively vaccinated them against the disease.

This type of vaccine is called “live” as it contains live bacteria. Later on, scientists realised that it was not always necessary to use whole, live bacteria in vaccines and that the same results could be obtained using just the dead, outside part of the cells. These are called “dead” or inactivated vaccines.

This research has saved countless lives, and led to the global eradication of smallpox in 1977, which Unicef estimates has saved around five million lives every year. Other diseases, such as polio, are almost eradicated because 80% of the world’s children have been immunised against it. This percentage is sufficient to stop the disease spreading. Vaccines have brought many other previously life-threatening diseases under control, including diphtheria, tetanus, yellow fever, whooping cough, measles, mumps and rubella.

Louis Pasteur also did a vast amount of work on developing a vaccine to immunise humans against rabies. He did not invent vaccinations, but built on the work of previous researchers and doctors, including Edward Jenner, who discovered (around 1798) how to use cowpox bacteria to inoculate people against smallpox. But that was part of his genius, according to Sylvie Morel, director of the museum in Dole, established in the house where Pasteur was born. “He was a very black and white character, very self-disciplined, implacable towards his enemies, ultra-loyal with friends and family. His detractors say he borrowed other people’s discoveries and even his discovery of pasteurisation wasn’t entirely his own. Other people had already discovered that you could preserve garden peas by keeping them in heat-treated jars, for example. But he found out why.

“His contribution was explaining the scientific mechanisms behind processes, including vaccination, pasteurisation, sterilisation, and decomposition. Jenner knew that his vaccinations against smallpox worked, but throughout his life was ridiculed by doubters because he couldn’t scientifically prove how and why.”

She says that he was also one of the first scientists to understand that research could only progress as a team effort. For example, his colleague Pierre Roux, who was a co-founder of the Pasteur Institute, developed a cure for diphtheria and discovered that dead vaccines could work.

“Pasteur was an excellent researcher. He didn’t pull genies out of the hat, he worked on other people’s research to advance their discoveries. He also understood that to carry out scientific research you need money. But, of course, money for medical research has always been lacking, so he realised that he would have to sell himself, sell the work, and popularise science. He was probably the first scientist to realise that he needed to increase his stature, his media profile and his visibility in order to get funding and facilities. He was a media giant, and relentlessly corrected press articles, and explained himself and the science he did. He vaccinated animals in public to raise his profile, and entered for prizes and awards in order to continue his work.”

In the 21st century it might seem odd that there are still some people who doubt that vaccines work (see our Back Page), but Ms Morel puts it down to their success. “Due to immunisation programmes, today in Western Europe no one sees people dying of diseases like TB, diphtheria or smallpox so there is a tendency to believe that being in good health is the natural state of things. But in fact that’s not the case. We are healthier and live longer than at any time in history because we eat uncontaminated food, drink clean water, live in clean houses and in towns with efficient sewerage systems.

“Public health depends on a majority of people being vaccinated in order to protect the few who are not. But today we live in a culture of increasing individualism, where there is less concern for group welfare than for individual choice. But if you go to developing countries, in Africa for example, you quickly see that public health without vaccinations, clean water etc is not at the same level.”

She is proud of the museum’s interactive displays, allowing children as well as adults to re-enact some of Pasteur’s experiments, as well as exploring the effect that vaccination has on public health: “The display shows visitors the mathematical calculations. How many people will die of a given disease if you vaccinate 50% of a population (it’s quite a lot) or 70% or 90%?

“We hope it helps people understand Pasteur’s work - and especially the importance of vaccination.”