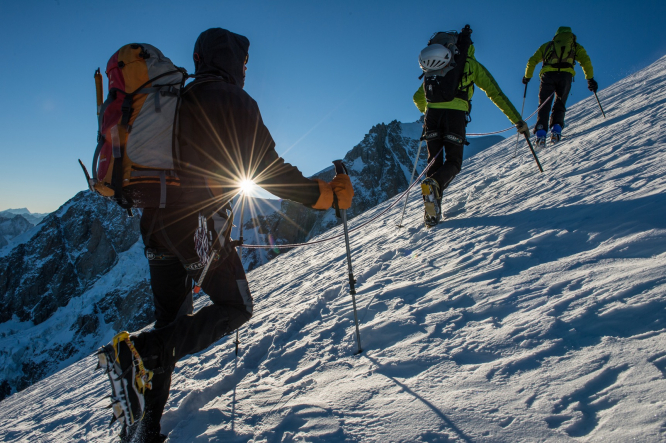 A form of mountaineering that began in a posh club in Victorian London is now on Unesco’s ‘intangible cultural heritage list of humanity’.

But Alpinism is about more than scaling summits for sport, according to alpine guide Claude Marin.

“When you are an alpinist, there is a force which pulls you to the top of a mountain,” he said. “It is a way of going beyond boundaries and forming strong, enduring bonds with those you climb with.”

Mr Marin was one of leading figures behind the bid which was jointly submitted by three Alpine towns – Chamonix in France, Courmayeur (Italy), Orsières and canton Valais (Switzerland), and backed by the University of Geneva.

The successful bid defined alpinism as an art which is a “traditional, physical practice characterised by a shared culture, made up of the knowledge of mountain environments, the history of the practice and its associated values and specific skills.

“Knowledge of the natural environment, changing weather and natural hazards is also essential.”

“Particular knowledge and skills are necessary to go into them without risk and so transmitting that savoir faire is very important.”

Both Mr Thibal and Mr Marin admitted there were challenges facing alpinism today.

Mr Thibal said changing social habits puts alpinism in danger: “New sports like Nordic skiing and mountain hiking are easier ways to discover the high mountains, and are more popular than the more technical and demanding rigours of alpinism.”

Global warming is a huge factor, he said. Many areas are now inaccessible because glaciers are reduced in size and whole rock walls have collapsed.
“We used to work mostly in spring and summer, but now summers are too hot so we work in autumn instead.

“Because we know the mountains, we can give invaluable information to scientists from our first-hand experience.”

Mr Thibal said alpinists increasingly have to adapt to climb glaciers in winter and on bare rock the rest of the year.

Courts giving high damages to mountain accident victims is another concern: “We try to persuade courts that each individual has to take some responsibility for themselves when they go into the mountains, and that escalating pay-outs do not help.

“Mounting insurance costs, could put guides out of work if they get too high,” said Mr Marin.

Both men agree that there is something ‘very noble’ about alpinism.

“Its strength is in its values; overcoming difficulties, learning technical skills, sharing with others, and being in the heart of nature,” said Mr Thibal.

“However, this is also its weakness, making it less attractive in modern society.

“We have to keep it alive and accessible to as many people as possible, and I am sure this is what the Unesco listing will help us to do.”

In 1741, Englishmen William Windham and Richard Pococke, spread the word about Chamonix in journals, published throughout Europe, and two local men, Jacques Balmat and Michel-Gabriel Paccard, were the first to reach the summit of Mont Blanc in 1786.

The first Alpine Club was founded in London in 1857 and that original club still exists with members who remain among the leading edge of worldwide mountaineering development and exploration.

There are now 90 Alpine clubs in 69 countries with 3million members.

Ed Douglas, mountaineer and honorary editor of the original club’s Alpine Journal, says it was natural for early British travellers, who spent their summers in the Alps to form a club: “Clubs were fashionable in the Victorian era, and this gave members a place to discuss their alpine adventures during the winter months in London.”

One of the most well-known member was Edward Whymper, (1840-1911) who is buried in Chamonix: “He was the first to climb the Matterhorn in 1865 which made headlines when four of the climbing party were killed during the descent.

“He achieved several other firsts in the Alps and wrote one of the classic works on mountaineering, Scrambles Amongst the Alps.”

He too made many first ascents in the Alps, wrote a classic guide, My Climbs in the Alps and Caucasus, and climbed extensively in the Himalayas.

“He was often without guides, and underlines the most fundamental principle of alpinism which is self-reliance.”

Instagram in the 21st century, Mr Douglas says, has been a disaster: “More people want to be in the photo at the top of the mountain, and it does not matter how they get there.

“In alpinism the summit is not the most important part, it is how you get there, and that is without fixed ropes and helicopters. The importance of the Unesco listing is that it recognises the value of alpinism in its purest state.”

There are now 90 Alpine clubs in 69 countries with 3million members.