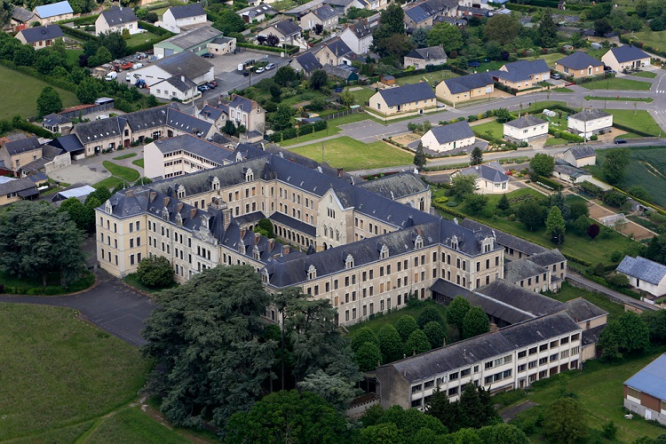 The Collège de Combrée is mostly empty and unused, but a local group wants to see it restored to its former glory
By Jane Hanks

In this day and age, it can be difficult to save spectacular buildings dating from an era when size did not present the same problems it does today.

The Collège de Combrée, in the village of the same name in Maine-et-Loire, is a prime example. It is enormous – 16,000m² – and monastic in style, with a large neo-Gothic chapel and four courtyards, one of which has a cloister.

Eighty per cent of the building is largely abandoned and falling into disrepair.

The rest, the old farm building, is occupied by a youth retraining centre but that will be moving nearer to Angers in 2022.

Its cause has been taken up by a former British ambassador (to Nepal), Keith Bloomfield, who retired to France with his French wife Geneviève Charbonneau-Bloomfield, who was born in Combrée.

They live opposite the Collège and, intrigued by what was left of its former glory when they moved back, Mrs Charbonneau-Bloomfield studied its history for a history of art Masters dissertation from the University of Rennes II.

The Collège was built between 1854 and 1858 as a large public school, with ambitions to be a “Palace of Education”.

In 1810, a troublesome priest, Abbé François Drouet, had been sent to Combrée because he had too many ideas that destabilised his superiors.

Church people were under close scrutiny after the Revolution and Counter-Revolution in west France.

Drouet took risks, determined to pursue his plan to bring education to a part of the country that had no schools.

He had inherited a large presbytery and such was the demand that he was quickly in charge of 300 pupils.

After his death, church authorities realised it was time to offer better student accommodation.

It was a radical change from the Revolutionary period, when so many of the churches had been turned into stables.

Twenty workmen came to live in the village. Tuffeau, a white sandstone from the Loire Valley famous for its use in Loire chateaux, was brought in by boat.

Slate from local quarries was used for the roof.

The staff were to live in the Collège, so it had to be big and functional, with a farm to feed the community.

The front façade was for bedrooms and the teachers’ quarters.

A cloister led to the classrooms, the dining room, and the chapel (pictured above right), built in an imposing neo-Gothic style.

The aim was to teach piety and academic studies, with a strict regime, and for many years it had an excellent reputation.

More than 20,000 students were educated there. But from the 1990s, the Collège began to attract fewer boarders and, in 2005, it closed. In 2006, the state bought it to house a re-training centre for young jobseekers.

The historic part of the Collège building remains unused.

When the youth retraining centre leaves in 2022, it is thought the state will try to find a new project or put it up for sale.

In 2014, the Association pour la Sauvegarde et la Mise en Valeur du Collège de Combrée (ASMV Collège de Combrée) was founded by Mrs Charbonneau-Bloomfield with the support of her husband and a large group of followers.

Mr Bloomfield said: “The members have been concentrating on finding potential projects and investors.

“The association has many English-speaking members. It is shocking to see such a building being abandoned.”

The couple say the building has great potential: “Though it is in the countryside, it is not far from three major cities: Nantes, Rennes and Angers.

“If both public and private money were invested, it could be a real centre for development and bring employment to the area.

“We believe it could be a multi-functional centre, with different investors, divided into three parts: an educational training centre, accommodation and catering, and a culture and art wing.”

Other buildings in France have been saved in this way.

Financial partners at an ancient monastery, Chartreuse de Neuville, Pas-de-Calais, are creating a cultural centre around tourism, education and horticulture.

Ursulines, a former convent at Château–Gontier, Mayenne, is now a music conservatoire, theatre and tourist office, and the Abbaye-Ecole at Sorèze, Tarn, has an arts centre with a theatre, art gallery and tapestry museum.

Mrs Charbonneau-Bloomfield is sure Collège de Combrée could have the same kind of future, though she admitted it has been a greater struggle than she anticipated: “There has been some local resistance to supporting a very large building with such a strict Catholic past, not very well connected for transport. But this is a magnificent building and part of France’s history and heritage.

“As the present occupants will leave soon, this is the right moment to find people who will turn this into an imaginative and realistic project to kill two birds with one stone – save the building and serve the local population – but we need support.”