Bordeaux’s past recreated in all its historic glory 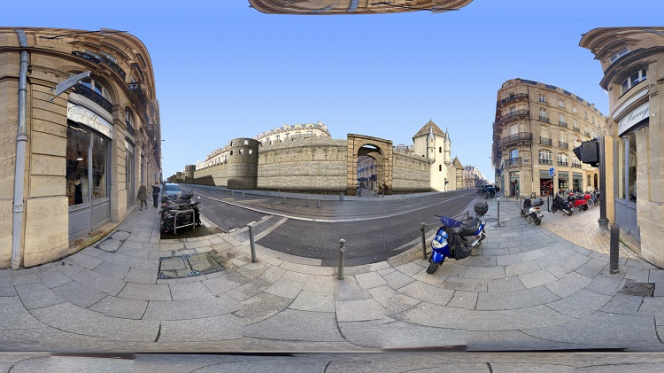 A 3D virtual tour of Bordeaux has been created by a graphic designer.

With the help of special glasses, you can now see ancient monuments that have long since disappeared.

Frédéric Brouzès-Loup, 45, pictured, wanted to mix his passion for history and his professional skills to offer a new perspective of the city he has come to love.

He said: “I did some research and thought it would be fun to recreate monuments that have disappeared and show that they are still part of the city’s history.

“They may have been destroyed but their traces continue and they have participated in the development of the Bordeaux of today.”

Mr Brouzès-Loup travelled around Bordeaux with a smartphone, taking 360-degree pictures of places he was interested in so he could combine the  images.

He then re-created the monuments in 3D on his computer.

The Grosse Cloche gate is an example.

This has not completely disappeared but he recreated it in all its original detail.

He has also reproduced the Château de Trompette, a fortress built after the Hundred Years’ War but destroyed in 1818.

People can now see the monuments in today’s world in “augmented reality” thanks to a smartphone and special glasses.

Mr Brouzès-Loup said: “What is most interesting is to make the link between the images of Bordeaux before and now.

“I first came to Bordeaux in 1989 and thought it was an awful city.

“Then, after living here for a few years, I fell in love with it and saw that it was full of hidden treasures.”

The tour lasts two hours and costs €12 for adults.

Reservations should be made by email to frederic@bordeauxstoric.com . Guided tours can be carried out in English.

A walking tour of Bordeaux that highlights the historic impact of the English presence in the city is being launched by a French tourism student.

Marylène Laprade, 48, pictured, was amazed in particular at how deeply English people had influenced the region’s wine economy during the Middle Ages.

Mrs Laprade, who plans to start her two-hour tour soon, said: “The landscapes have evolved because of the wine industry, which was developed thanks to the many privileges we were granted under the English crown.

“The English stayed for 300 years and had a big impact on politics and the economy in Bordeaux and across Aquitaine. These enabled the local wine business to flourish significantly. Bordeaux was very proud and happy to have the English presence.”

The tour will show how the English domination had an impact on the city’s architecture, as well as its political, administrative and economic life.

It will focus on the places and monuments that show the connections and the tensions between the kingdoms of France and England. Here are five spots that will be included:

Built in the 12th Century, the cathedral saw the marriage of Duchess Eleanor of Aquitaine and Louis VII, king of France.

She thus became queen of France and reigned until 1152.

Eleanor of Aquitaine later became queen of England by marrying the Duke of Normandy, Henry II, who was crowned king of England in 1154.

The “big bell” gate, built during the English reign, has become a city landmark.

Magistrates used to ring the bell when it was time for the wine harvest and to warn the population of fire.

Porte Cailhau (pictured right) is one of the last vestiges from the Middle Ages and was built in 1493 and honoured the victory of French King Charles VIII in Fornovo, Italy.

After the departure of the English, several buildings were erected to praise the French king.

Richelieu’s wharf is part of the left bank, which runs along an 80m wide strip and is more than 4.5km long. It is an opportunity to see the port and Garonne river.

Port of the Moon

This is on Unesco’s World Heritage list and was an important place for cultural and commercial exchanges.