City portrait of Nantes: Past is fused with present and machines rule 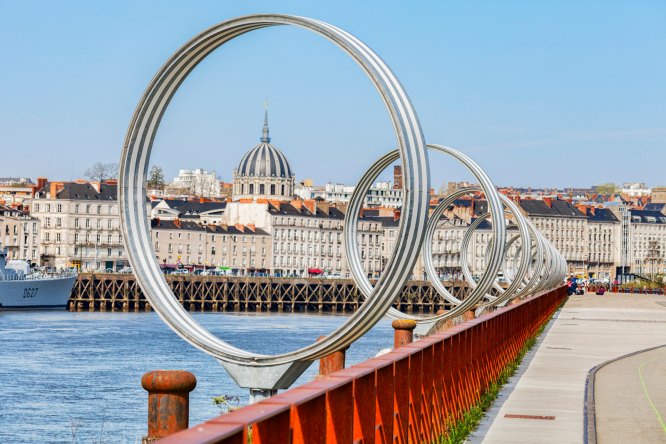 Situated 50kms inland from the Atlantic Ocean, it has a population of around 310,000 inhabitants in the city centre, and approaching a million in the metropolitan area, including the massive sea port of Saint-Nazaire. Nantes is the capital of the Pays de la Loire region, although its heart and soul belong firmly to Brittany.

In the 18th century, as France’s largest port, nearly half the country’s slave trade passed through Nantes. In acknowledgement of this, the city has a large Mémorial de l’Abolition de l’Esclavage on the Quai de la Fosse in the city centre.

Nantes’ nicknames include La Cité des Ducs (of Brittany) and La Venise de l’Ouest because of the multiple quaysides and river channels which ran through the city before they were filled in during the 1920s and 30s. Because of their yellow and green strip, the local football team is variously nicknamed Les Canaries, Les Jaunes et Verts, and La Maison Jaune.

Public transport in Nantes is well-organised, clean and regular, but given how many areas are pedestrianised, renting bicycles is also a great option. Electric ones will have you pedalling up and down the city’s gentle hills as effortlessly as an Olympian.

On a fine day, the first and obvious place to visit is the Île de Nantes with its mechanical elephant, steampunk carousel and the famous Machines de l’Île. There is a slight debate about whether it is best to ride the famous elephant (for 35 minutes) or watch it walking about the former docks. Personally I think riding in the elephant is the experience, and watching it simply is not the same.

If you watch, check out the eyelashes which are very cute, but beware the trunk because it sprays people with water. Book tickets online in advance to avoid disappointment.

The other machines, in much the same style, are smaller but great fun and the guide makes them all work. There is also a small hothouse, and you can see the workshops from a first floor gallery. Most of the machines made here are exported (many to China) but Toulouse has amassed a fine collection of them (La Halle de la Machine) and Calais incidentally has a dragon.

An interesting thing to explore is the experimental ‘tree branch’. It is a steel structure containing a staircase (up) a high walkway and a second staircase (down). The sides of the stairs and the walkway are planted with all kinds of trailers and creepers, making it into a hanging garden. This is a prototype for a planned tree (L’Arbre aux Hérons) which will incorporate 28 similar branches. It will be 35 metres high, and the crown will have a circumference of 50 metres (the trunk will be 15 metres in circumference). The whole thing will weigh a colossal 1,700 tonnes, and will be installed just to the west of the steps leading up to the Jules Verne Museum.

It is not expected to attract herons particularly; the name refers to a planned carousel ride in the tree. The trunk will house a double helix staircase like the one designed by Leonardo da Vinci at the Château de Chambord.

For the moment however, there is just one branch and it will take 10 minutes to inspect it before you head over to Le Carrousel des Mondes Marins with its nautical theme. The carousel has three stories; on the ground floor some of the rides descend underwater (a sound and light show) and on the first floor the access bridges to the rides are pulled away leaving you suspended in mid-air (only for older kids) and on the top floor there are all sorts of steamy, smoky rides for all ages. You can watch from the galleries or buy a ticket for the ride.

On a rainy day take children to what in Dublin is called the ‘Dead Zoo’; ie. Muséum d’Histoire Naturelle, which on the first floor contains all sorts of stuffed animals in glass cages, as well as a whale’s skeleton which you can actually touch. There is also a vivarium containing snakes, and some models showing that dinosaurs had feathers - a factoid I bet you didn’t know before! There is also a small play park in front of the museum.

The Passage Pommeraye is a beautiful shopping centre built in 1840-43 and most recently renovated in 2015. Constructed around a staircase running between the lower and upper shopping streets, it is fabulously decorated and houses a nice selection of smaller boutiques. (For a major shopping extravaganza go to the Atlantis mall on the western outskirts of the city.)

At the top of the Passage, seek out La Cigale – on their website they like to boast of being the most beautiful brasserie/ café in the world and they might be right. It can be hard to get a table here at lunch or in the evening, so drop in mid-morning or afternoon.

'Food is a big thing in Nantes: Eating outdoors and eating together is encouraged by picnic areas scattered around the city'

Many are planted with vegetables, and/or fruit trees and bushes, and anyone can pick the produce. The city’s largest covered market is the Marché de Talensac which is open every morning except Monday. Try local cheeses including Curé Nantais, and Tomme Chapelaine, as well as the Gâteau Nantais, which is made with almonds, rum and lemon.

The fairy-tale Château des Ducs de Bretagne’ complete with exterior walls, moat and drawbridge contains the very modern and comprehensive Musée d’Histoire de Nantes with its interactive videos and displays. Sadly only a hint of the historical interior of the building remains, but you can walk around the ramparts enjoying the views for free.

As you explore the city you will notice lime green lines on the pavements. This is Le Voyage à Nantes – follow them and you will discover all sorts of unexpected sculptures and installations. A child scrambling onto a plinth, a phosphorescent ‘Lunar tree’, a giant tape measure... there’s even a croissant-shaped football pitch which people actually use. Grab a map from the tourist office to situate everything to see.

The LU in biscuit stands for Lefèvre- Utile – the names of the man who founded the factory, Jean-Romain Lefèvre, and his wife, Isabelle Utile, and the factory in Nantes was for decades one of the city’s major employers. Now that it has moved to new, larger premises, the old LU biscuit factory has been turned into a cultural centre called Le Lieu Unique – retaining the initials LU – with a performance venue, a café, a book shop, a reading space and a stall selling LPs. There you will also find a restaurant, a hammam and a crèche.

There is plenty to do in Nantes, but if the ever-present whiff of sea air calls you to explore the coast, it is a short drive to one of the nearby bathing resorts. The poshest and most well-known is La-Baule-Escoublac with its chic boutiques, pretty port and sandy, gently-sloping beach which stretches almost 8kms around the bay. Constructed when the railway arrived in the 19th century, it is jammed with impressive and highly-decorated villas.

These days, although still a millionaire- magnet and rapidly being populated by wealthy runaways from Paris, it is a little bit sleepy, making it an ideal place to relax and recharge. The beach faces south, and La Baule is at the western end of the bay. At the other end is Pornichet, slightly smaller, but the entire beachfront is lined with hotels and apartment blocks, making it hard to say where one ends and the other one starts. If the tide is high, inland from Pornichet is an area called the Parc Paysager, which has children’s play areas.

For a trip back in time, spend a day exploring Guérande, half an hour away by car; the only medieval village in France which has retained its fortified walls in their entirety. Most of the centre is pedestrianised and market days (Wednesdays and Saturdays) are especially good times to visit and explore. You can also walk round the ramparts.

The village is packed with shops selling local produce with the accent on salt. From salted butter caramels to pâtés, everything contains the salt produced by the ‘paludiers’ on the nearby mud flats (see right). Drive out to the ‘Terre de Sel’ centre and you can visit their exhibition and also take a guided tour of the shallow salt pools themselves. (You cannot go without a guide.)

Exploring mountain refuges and cabins in France
19 October 2021
More from Explore France
More from Connexion
Get news, views and information from France
Join the newsletter
Subscribe to The Connexion