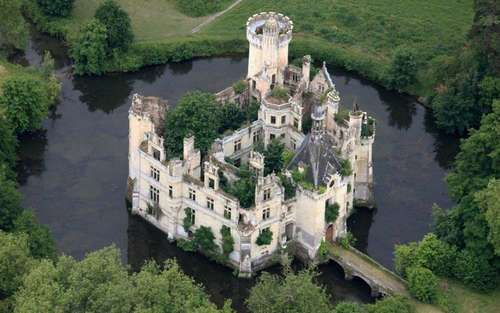 An abandoned French chateau that was saved by €2million in crowdfunding from thousands of donors has enjoyed its first summer as a tourist attraction.

La Mothe-Chandeniers at Trois-Moutiers, between Tours and Angers, was 80 days away from possible demolition when it was the subject of a rescue bid by heritage lovers.

It had been abandoned after a devastating fire in 1932.

As reported, thousands of people from across the world raised the €500,000 needed to buy the 13th century site with about a month to spare - with every €50 offered buying a share in the company set up to restore and maintain the neogothic building and its immediate environment as a tourist attraction.

The plan is not to return the chateau, which was twice seized by the English during the 100 Years war, to its former glory but to preserve it as a 'Living Ruin'.

"There were some discussions, but we voted for the conservation of the trees, because they do not threaten the structure of the castle and they give it all its charm," Romain Delaume, co-founder of Dartagnans, the company that bought and operates the site, told Les Echos.

The aim is to welcome 20,000 visitors a year to the chateau - and have a turnover of €200,000. Part of the chateau is being developed to create 20 guest rooms. Guided tours and events began when the chateau opened its doors to its first visitors in time for the summer season.

About 1,200 of the 25,000 shareholders also volunteered to take part in workcamps to prepare it visitors - clearing rubble, cutting hedges and clearing access in time.

There is still time to visit La Mothe-Chandeniers before its first season ends in mid-October. A Romantic Dinner is planned for September 7; A candlelit tour takes place on October 17 - and chatelains will be invited to Christmas celebrations in early December.

See also: Owning a French monument historique has its advantages