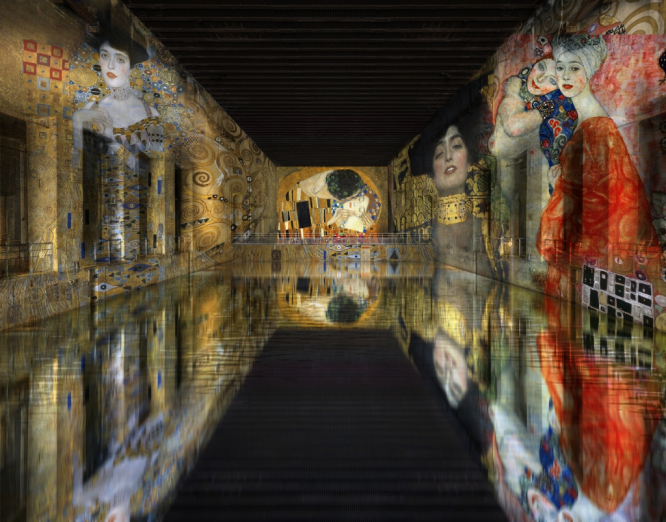 Pictured: a simulation of the installation showing some of Gustav Klimt’s best known paintings.
By Samantha David

Bordeaux has added to its already impressive range of museums with a new immersive exhibition space, the ‘Bassins de Lumières’, which claims to be the world’s largest digital art centre. It is housed in a disused submarine base, which was one of five constructed along the Atlantic coast during the Nazi occupation of France. Construction of the giant basins began in 1941 and was completed in 1943, when it was used to house submarines by the Italian Royal Navy.

It was codenamed BETASOM (from ‘Beta’ referring to Bordeaux and sommergibile meaning submarine in Italian). Although not directly on the coast (Bordeaux is 60kms inland), during the Second World War it housed up to 30 submarines and included dry docks as well as massive basins.

The history of the building

The Allies bombed the site but with little effect, and Allied troops eventually occupied it in August 1944 and drove the Nazis out. After the war, the authorities realised that destroying the site was not a feasible option as it had been built to withstand bombardment; the bunker was 245 metres wide, 162 metres long and 19 metres high, and the reinforced concrete roof was up to 5.6 metres thick.

Eventually some 12,000m2 of the 42,000m2 site was opened to the public as a centre for performing arts, exhibitions and evening events, but it has now been taken over and redeveloped by Culturespaces as a space for immersive digital art. The first exhibitions are set to run until January 3, 2020. Using 90 video projectors and 80 speakers, the massive images are projected onto the walls surrounding the monumental basins, with the reflections in the water adding another dimension to the artwork on display.

Events in France this month: art, nature and music festivals

Visitors walk along the quaysides and along gangways above the water as artworks are projected onto the walls. Four of the basins comprise the main space and exhibitions there will alternate between long exhibitions devoted to major artists, and shorter ones featuring more contemporary work. There are also three other exhibition spaces.

This year the exhibition in the main basins is ‘Gustav Klimt: gold and colour’ which looks at a century of Viennese art, presenting portraits, landscapes, nudes, colours and gilding. Austrian artists Gustav Klimt (1862-1918) was a founding member of an artistic group called the Vienna Secession.

The aim of the group was to exhibit work by unconventional young artists and bring the best foreign artists to Vienna. Influenced by Japanese art, Klimt is credited with paving the way for modern art. His focus is firmly on eroticism of the female body, and much of his most popular work, including ‘The Kiss’, features gilding.

Another exhibition currently running at the Bassins de Lumières is ‘Paul Klee: painting music’ which showcases the colourful abstract work of the German artist. Paul Klee is a musician as well as a painter, and the exhibition is a door into his pictorial world. Colourful fish, portraits and puppets combine to create an enchanting interlude.

In yet another space, ‘Le Cube’ there is an exhibition called ‘Ocean Data’ which is exactly what it says on the tin. Digital creation studio Ouchhh (a Turkish collective) specialises in graphic design and motion design and digital projections. They have collected massive amounts of data about the sea and created an algorithm which presents the data as a series of forms, light and movement. It is a journey through the sea via different materials and colours; a combination of art, science and technology.