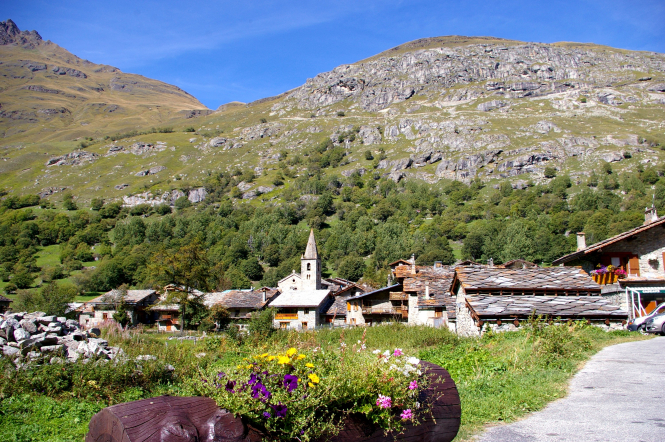 Bonneval-sur-Arc, one of the Most Beautiful Villages in France lies close to Italy in south-eastern France Pic: OT Haute Maurienne Vanoise

For villagers at Bonneval-sur-Arc, Savoie, not far from the border with Italy, winter is only just coming to an end in May. For centuries, the village with a population of around 400, far more than the 250 who live there now, was cut off from the rest of the world for months.

Hervé Dufour, retired guide for the village, said the inhabitants described their year as huit mois d’hiver, quatre mois d’enfer, eight months of winter, four months of hell, “because they had to work so hard during the short summer to grow crops, harvest them, make hay and get ready for the hard months ahead.

“There were two mills for flour and all the bread for the winter was made in the autumn. The loaves would be stored out of the way of rodents and became harder and harder. To eat them they would soften pieces in soup or milk.”

Travel to other villages was impossible in winter, but there was a social life:

“There were more cafés than there are now and people had fewer needs than today. As winter drew to an end, anyone with a sure-footed mule was paid to use them to clear the road.”

Life began to change when tourism started. “There was a hotel at the beginning of the twentieth century where couples would come in the summer.

“The husband would set off into the mountains with a guide and the wives would stay behind in the village. Now we have a ski resort which means local people can make a better living and life is not as hard as it used to be.”

Mr Dufour says that one man is credited with making Bonneval-sur-Arc what it is today, one of the Most Beautiful Villages in France.

He was a businessman, Gilbert André, who was born in the Vosges, but developed a passion for the mountains. He arrived with his rucksack in Bonnevalsur- Arc, one day in 1953, and never left. He was mayor for 37 years from 1957.

“He was one of the first to bury overhead cables underground, in 1958. It meant telephone communications would not be cut due to snow on the lines but it also made the streets more attractive.

“When skiing developed he could not prevent a station developing, but he advised the local population to run it themselves and not let any big company take over. To this day the ski resort belongs to the commune.”

He also campaigned for the creation of the first National Park in France, the Parc National de la Vanoise in 1963:

“He was so determined a National Park was necessary to protect the area he would take villagers by coach to Switzerland and Austria to show them the advantages. He was a visionary.

“He set up a co-operative for farmers to sell their cheese and invited artisans into the village.” Just an hour’s walk from the village is the hamlet of Ecot, part of the commune.

It is even more remote and though it was originally the same size as Bonneval-sur-Arc, inhabitants gradually left when electricity came to Bonneval but not to the hamlet.

In the 1960s this untouched medieval village was restored and it is a perfect example of Alpine life. Gradually people are starting to live there again, some all year round, and hikes to it are popular in summer.

12 hours ago
3
Coronavirus: Daily updates on the situation in France

Help is at hand: Mayday signal’s French origins explained
22 May 2021
More from Explore France
More from Connexion
Get news, views and information from France
Join the newsletter
Subscribe to The Connexion