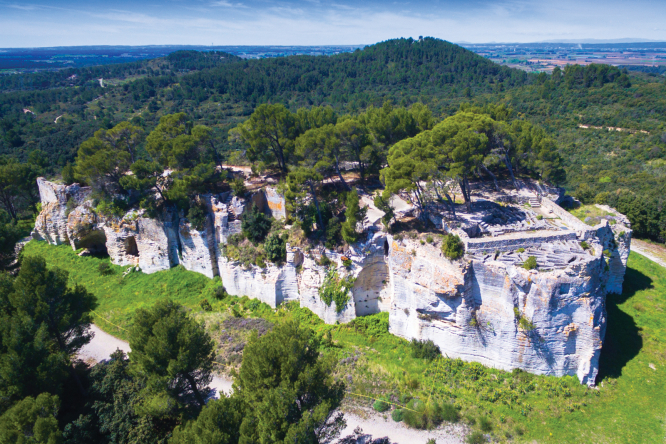 'Often overlooked, Beaucaire is sometimes called a Sleeping Beauty. The town is beautiful but has the air of having been passed over by modern times' Pic: Provence-Camargue Tourism

This summer we will all be looking for fascinating places just off the beaten track, where we will have a better chance of seeing some interesting cultural and historical attractions without finding ourselves mixing with too many crowds. There are two great examples of France’s lesser-known attractions in Beaucaire, just north of the Camargue.

The fortress/chateau of Beaucaire rises above the town like a Disney cartoon, dominating the river and providing commanding views across the countryside in all directions.

Looking at it, it is obvious that when it was constructed back in the 13th century the area was fiercely fought over. As a first inland port upstream from the Mediterranean, it was essential territory. It was largely reconstructed and enlarged in 1350 and the city’s ramparts were extended in 1355. At various times the townspeople even besieged their own castle, ownership of it was so disputed.

Today it is a perfect place to let children run about and play on the grassy areas amongst the ruins, or dash along the ramparts imagining what it must have been like to defend the structure from an angry mob.

Often overlooked, Beaucaire is sometimes called a Sleeping Beauty. The town is beautiful but has the air of having been passed over by modern times.

However, if it is sleepy today, it was not in the past. To put an end to the ceaseless fighting, the chateau was dismantled on the orders of Richelieu in 1632, and stayed that way until it was inspected by Prosper Mérimée in 1834, who was scandalised to find bull running competitions being organised in the ruins.

Part of it was classed as a historical monument in 1862, and the remaining parts of the site in 1950.

In normal times all sorts of activities are organised in the ruined chateau including escape games and medieval fêtes, so ring ahead or check the Tourist Office website before planning a visit.

While you are in Beaucaire, the other historical site well worth visiting is the Troglodyte Abbaye de Saint-Roman, a 10th century monastery high on a hill just outside the town.

You can either drive or walk up to the monument, but once you get to the gates, there is still a fair amount of scrambling to do and the site isn’t really accessible to anyone with reduced mobility. The smooth stones can also be quite slippery in the rain.

Its age means the history is somewhat shrouded in mystery. There’s an underground chapel, several monastic cells, and exposed to the elements above it a quantity of shallow stone graves. Their size shows just how small the inhabitants must have been.

The arrangement of them seems slightly haphazard, and if you’re there just after a storm they look for anything like a series of goldfish ponds, although normally they are bone dry.

The human remains have long since disappeared, leaving just an incredible sense of peace. There are spectacular views across the Rhone Valley and Provence. The sun beats down from an azure blue sky, the pines cast scant shade, the noises from the town below are muted, there is just the restless movement of the wind across the peaks.

If you are lucky enough to visit the site when it is not too crowded, it is a perfect place to dream, to imagine, to spin a web of what life must have been like for the men and possibly women, who lived here.

The site is closed in high winds for obvious safety reasons. Take water and cash, as they do not accept credit cards at the gate. There are no toilets. Watch out that nobody slips and falls.

The 10 most expensive cities to park your car in France
16 September 2021
More from Explore France
More from Connexion
Get news, views and information from France
Join the newsletter
Subscribe to The Connexion