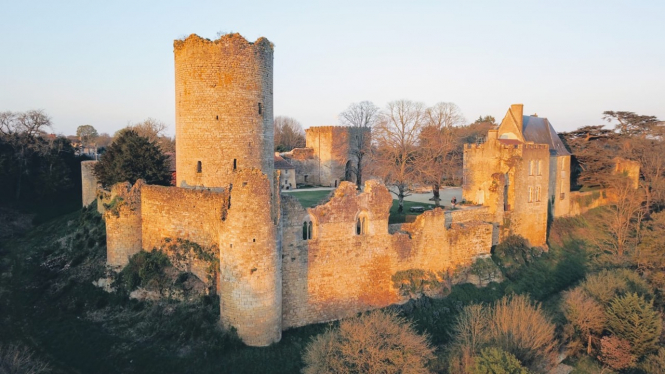 The owners of a medieval clifftop castle steeped in French history aim to share it with the public after undertaking the mammoth task of restoring it. Château de Montreuil Bonnin, Vienne, (chateaumontreuilbonnin.fr) has all the features you would expect from a fortified castle.

Situated on the north shore of the Boivre river, it is an impressive example of medieval military architecture. A large moat surrounds the huge 12th-century walls and five towers. Within the walls is an impressive circular keep, built in the 14th century. There is a fortified gatehouse, and the rare remains of a noble’s house at the base of the keep.

To the south, there is a Renaissance hall, which is lived in today by the owners and rented out as a gîte in the summer. The chateau has belonged to Isabelle Dupont’s family for nearly 160 years. When she inherited it in 2012, she and her husband Jérôme and their children decided to live in the property and restore it: “I felt it was important to do as much as I could to pass it on in the best condition possible,” she said.

“It has become my life’s work and the more I work on it, the more attached and fascinated I am by it. The castle has always been lived in and represents all stages of the history of France, from the 12th century onwards. It has seen a great deal of fighting over the centuries and been host to many famous historical figures. It changed hands between the French and the English many times in the Hundred Years’ War.”

During the medieval period, the chateau held an important position in the Poitou region. When Eleanor of Aquitaine married the future Henry II of England in 1152, the castle passed into the Plantagenet family and the kingdom of England. In 1170, their son Richard the Lionheart became Count of Poitou and he would often come to hunt at the chateau and in its surrounding forests.

Around 1181, it became one of the most important minting houses of the Middle Ages. In 1199, shortly after the death of Richard the Lionheart, Eleanor visited Montreuil Bonnin. Following her death, the castle became French. It was once again used for making money, a role which brought wealth to the chateau. The building as it is today dates from the early 13th century.

How is Paris' Notre Dame fairing one year on from the great fire?

During the Hundred Years’ War, Poitou was once again the scene of heavy fighting. In 1346, the English set the chateau on fire and destroyed the minting factory. It then changed hands several times. In 1423, French king Charles VII gave Montreuil Bonnin to a Scottish captain, Laurent Vernon, and it belonged to his family until the Revolution. During the Wars of Religion, it was a stronghold for Protestants. Henri IV stayed there in 1582 with Queen Margot, his first wife. After the Revolution, the state took possession and it was used as a quarry for building stone.

In the 1840s, it was saved by the local mayor, who had it classified as a historic monument. It was bought in 1862 by Pierre Ernest Chénier, ancestor of Isabelle Dupont. The first major project, recently finished, was to restore the gatehouse, which has a room in it. The second, far bigger, project is to restore the 25m-high keep, which at present is dangerous because of falling stones and is open to the sky.

“Because the building is listed as a historic monument, we work closely with the Direction Régionale des Affaires Culturelles (Drac), which funds 40% of the works. Their regulations are very strict. We have spent the past two years researching the history of the keep, because we have to prove to the Drac that our restoration will put the building back into its original state, otherwise we will not get the go-ahead for the works. We have to make sure the roof will be identical to the way it was in the 13th century. So our first job was to hire archaeologists to carry out the research."

“Inside, we will put in two floors, and it is easy to see where they were originally. There are also fireplaces we will be able to restore. Our plan is to turn one floor into an exhibition space, and another will be a chambres d’hôtes. Lots of people have told us how amazing it would be to spend a night sleeping in a keep. We hope to be able to start work this month (September).”

Architecture in France: discover the churches of the north east

Raising money has been essential to the project, which has been costed at €900,000. To meet Drac requirements, all the work has to be carried out using traditional skills and the cost of employing artisans is high, as well as the cost of materials. The project was helped in 2018 when it won money from the first Heritage Loto organised by television presenter and French heritage supporter Stéphane Bern. It was also the only French monument to win a prize in the European Heritage Awards and was selected for the public prize.

“We think this shows just how popular a project this is. Our real intention is to share it with others and not keep it to ourselves. We have created an association to help raise money and work on the chateau, the Association des Amis du Château de Montreuil Bonnin, and organise events every year.” Mrs Dupont said they are €100,000 short of their goal for the restoration of the keep and have launched a fundraising platform. They would be grateful for any donations: tinyurl.com/yy6z8m3m.

The chateau will be open for the Journées Européennes du Patrimoine, on September 19 and 20, with a medieval festival. There will be a night-time illuminated visit and candlelight dinner for La Nuit des Châteaux event on October 19.