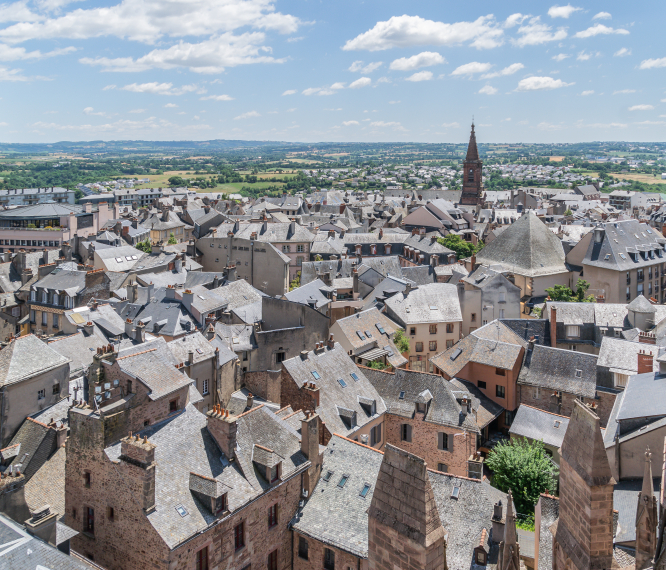 The city of Rodez perches on a rocky peak overlooking a loop of the river Aveyron. The buildings in its historic centre, constructed from a mixture of pink and grey sandstone, give the town an impossibly romantic character.

But let us not look through rose-tinted glasses. Life in medieval Rodez was often anything but romantic. Up until the fifteenth century, Rodez was split into two distinct parts, the City in the north, the territory of the bishops, and the Bourg in the south, run by the counts of Rodez.

Each had its own town hall and was enclosed by its own ramparts. The two factions were not always the best of friends, and this physical division arguably held back the town’s economic development as well as making daily life a challenge for its medieval inhabitants.

By the end of the Middle Ages, the jewel in the City’s crown was undoubtedly the cathedral of Notre-Dame. But the ruthénois/es (as inhabitants of Rodez are called) had been waiting nearly three hundred years to see it completed. The first stones of Notre-Dame were laid in 1277, but pestilence, The Hundred Years War and periods when funding ran out meant it wasn’t finished until the sixteenth century.

Medieval worshippers normally entered cathedrals through a large main entrance at the west end. Not in Rodez. Here, the visitor is faced with an imposing brick wall, giving the cathedral the appearance of an impenetrable fortress rather than a church.

Far above, however, a large rose window decorated with the gorgeous flame-like tracery of the Flamboyant Gothic style gives an indication of the treasures within. Once you’ve found your way inside, one of Notre-Dame’s star attractions is its monumental sixteenth-century retable. This astonishing construction fills an entire wall in the chapel of the Holy Sepulchre and contains a beautiful freestanding sculpture of the Entombment.

This microcosm of medieval painting, sculpture and architecture owes its existence to a prosperous patron, a canon of the cathedral called Gaillard Roux. Roux paid for the chapel’s decoration and wanted everyone to know it. He had his coat of arms, initials and personal symbols of the rose and star applied throughout the chapel. Fortune has spared this remarkable sculpture from the ravages of war and iconoclasm – the group remains in the very spot for which it was made. A modern restoration revealed a date carved into a pilaster near the top of the retable. Viewers can therefore now look at this arrangement as if having just stepped out of a time machine set to 1523.

The local workshop who created the Entombment invested its figures with all the sadness and despair of friends and family grieving a loved one. Here, they mourn the crucified Christ. The scene depicts Jesus laid on a shroud, ready to be placed into the tomb by Joseph of Arimathea and Nicodemus. Their names are carved, as if embroidered, on their mantles.

Behind the tomb we see an emotionally charged scene dominated by the grieving mother, the Virgin Mary, in the centre, supported on either side by Holy Women. Behind Nicodemus, Mary Magdalene looks on in sorrow, her long braided hair almost touching Christ’s feet. Behind the dead Christ’s head stands St John, holding the crown of thorns.

Outside the cathedral, beyond this private devotional chapel, stands a much more public display of wealth. The bell tower, at 87 metres one of the tallest in France, is visible for miles in every direction. The bell tower was built by rouergat architect Antoine Salvanh (someone from the Rouergue region is called a rouergat) and, unusually, placed at a distance from the cathedral in the manner of Italian campaniles like Giotto’s famous tower in Florence.

Medieval bell towers were a highly visible advertisement of a town’s prosperity, so the extra-tall Rodez tower clearly aimed to impress – or rather the bishop who commissioned and paid for it aimed to impress.

Bishop François d’Estaing, a local man, had the tower built between 1513 and 1526 to replace a previous version that had burned down. D’Estaing said he wanted it to be ‘le plus beau’ and ‘le plus haut’ - the most beautiful and the tallest. And in this he was not disappointed.

The bell tower is a marvel, its intricately carved stone resembling lace. Visitors with strong legs and a love of heights can book a place to climb to the top for a wonderful bird’s-eye view of the town. From up here you can begin to imagine what life must have been like for the medieval inhabitants of this pink-hued southern belle.

A gem of a museum. The collection holds a large number of treasures from the medieval and Renaissance periods as well as the most important collection of menhirs (standing stones) in Europe. At 300,000 years old, the ‘Dame de Saint-Sernin’, is the oldest known large-scale depiction of a human in western Europe.

The tale of an old man living in fourteenth-century partitioned Rodez who forgets where he has buried his gold. The author consulted medieval court registers from the town archives in order to base her book on real people and events. A great way to get under the skin of medieval Rodez.

A window to heaven: 800 years of Metz cathedral

The Paris church visited by royals and even John Lennon