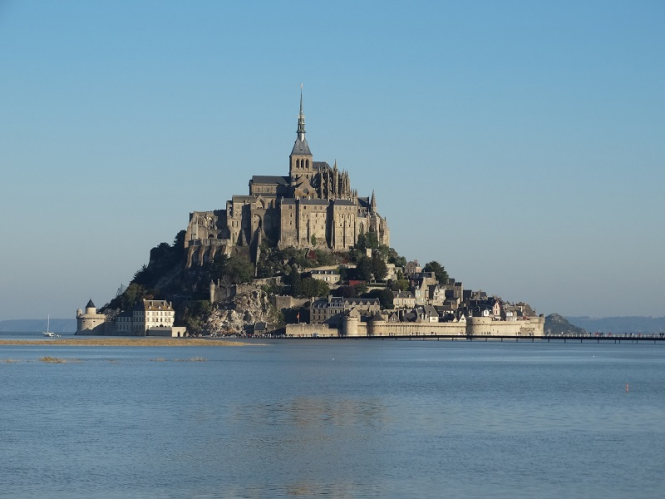 Mont-Saint-Michel, seen at high tide, from the mainland
By Julia Faiers

It does not take a genius to understand why Mont-Saint-Michel is one of France’s most iconic tourist destinations, attracting more than 2.5 million visitors every year.

This island off the coast of Normandy, with its gravity-defying abbey, manages to be both ridiculously romantic and to exude the mystical spirituality of its past.

A site of miracles and a pilgrim destination for more than 1,000 years, like Notre-Dame in Paris, Mont-Saint-Michel is part of France’s cultural DNA.

But why is it named after St Michael? A 10th-century text describes how, in 708, the archangel Michael told Aubert, bishop of Avranches, to build him an oratory on a tiny island inhabited by hermits called Mount Tombe.

Aubert ignored his request, so St Michael returned and burned a hole in the bishop’s skull with his finger.

This persuaded Aubert to go ahead and build a shrine on Mount Tombe, which he then sensibly dedicated to St Michael, on 16 October, 708.

The bishop then received miraculous assistance from a child, who rolled enormous stones to the site simply by touching them with his foot.

Bishop Aubert sanctified the altar of the new shrine with two relics, brought to him by messengers from the Italian monastery of Monte Gargano, Apulia, where the archangel had appeared in 492: a piece of St Michael’s red garment, and a fragment of the stone on which the saint had placed his foot.

The oratory was replaced by an abbey, which burned down in 922 according to a 12th-century manuscript created by a young monk of Mont-Saint-Michel.

A later version of the manuscript, held at The British Library, includes a dramatic illustration of this event, with the abbey engulfed in flames.

In 966, Richard, Duke of Normandy, established an order of Benedictine monks there, who set about reconstructing the stricken church and establishing a scriptorium, where they copied and illustrated manuscripts by hand.

The new abbey was finished in 1080, and it is from this point that Mont-Saint-Michel began to attract pilgrims in serious numbers.

Pilgrims often travelled substantial distances to worship at the altar of St Michel and, just like modern visitors, wanted to take a little something home to remind them of the spectacular spiritual site.

Badges were the number-one pilgrim souvenir, and Mont-Saint-Michel boasted a thriving badge-making industry throughout the middle ages.

We know this, because in 2007 archaeologists discovered at the entrance to the abbey a cache of pilgrim-badge moulds that have been dated to workshops from the 14th and 15th centuries.

These moulds were undoubtedly used to make thousands of badges, and depict subjects ranging from images of the archangel Michael to pilgrim symbols like the scallop shells of St James.

The journey to worship the relics of the archangel Michael was not without risk. Standing tall above a 12-mile stretch of tideland between Normandy and Brittany, the abbey was cut off from the mainland twice a day.

Until the modern causeway was built, Mont-Saint-Michel claimed the lives of many pilgrims crossing the sandbanks.

Trapped by the rising tide, countless pious travellers drowned before reaching their destination. Not for nothing was it also known as Saint-Michel-au-Péril-de-la-Mer.

By the 11th century Mont-Saint-Michel’s fame was so great, it even showed up in the Bayeux Tapestry.

The island abbey appears in scene 17, which depicts the Anglo-Saxon king Harold crossing the river Couesnon near Mont-Saint-Michel, and leading his men, some on horseback, through and out of the dangerous quicksand.

Visitors to the sacred mount today do not need to fear for their safety. A causeway elevated above the treacherous sands leads to the island, where travellers can climb the lung-busting ascent to the abbey perched atop the rock.

You may not be able to bring back a genuine medieval pilgrim badge, but you won’t come home empty-handed. The commerce of spiritual souvenirs is alive and well in Mont-Saint-Michel!

The Four Roads to Heaven: France and the Santiago Pilgrimage by Edwin Mullins (Signal Books, 2017)

Find out events happening, and the times of the tides, at: ot-montsaintmichel.com

Even more history – in English – at http://www.abbaye-mont-saint-michel.fr/en/Explore/L-histoire-de-l-abbaye-du-Mont-Saint-Michel