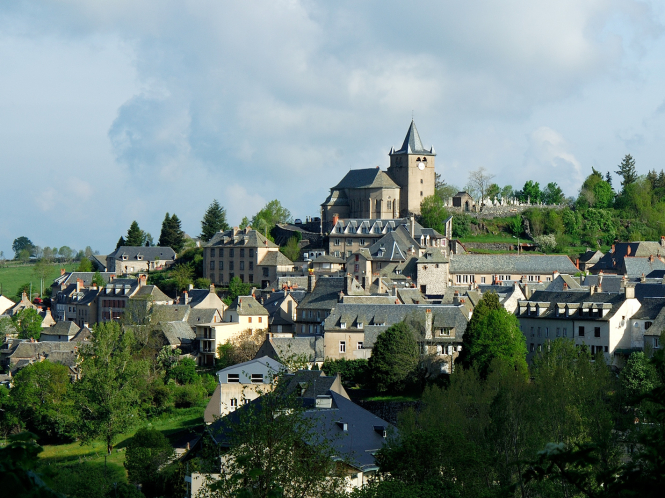 'In our village, there is no unemployment. We attract tourists but Laguiole is not a museum, and we are proud to be able to live by our traditions.' Pic: Office de tourisme d’Aubrac-Laguiole

This small village with 1,200 inhabitants, situated on the Aubrac plateau at 1000m altitude in the heart of the Aveyron countryside, is known worldwide for the quality of its pocket knives.

They were first made during the 19th century when forges in the area produced a wide range of farming implements for the local inhabitants who earnt their living through agriculture, particularly rearing the Aubrac cow for both their meat and milk.

The peasant farmers on the land all owned pocket knives, called a capuchadou, with a fixed blade.

However, one craftsman, Pierre-Jean Calmels, inspired by a Spanish knife, had the idea, in 1829 of creating a blade which folded into the handle.

Other characteristics were added over the following years. “In 1840,” says Séverine Dijols-Valenq, director of the Laguiole tourist office, “a sharp point was added, which was used by farmers to puncture the bellies of cattle who suffered from bloat after eating too much fresh green grass. In 1880 a corkscrew was added for local people who moved to Paris to find work in bars and restaurants. They began to spread the reputation of the knife.”

Mrs Dijols-Valenq says the next development, in around 1908, was the addition of a symbol which sits over the rotating part of the blade, though there is a continuous debate over whether it is a bee or a fly:

“In the knife trade, this part is called a mouche, French for fly, but the depicted insect is often called a bee. Now many other designs are used, in order to personalise the knives.”

After World War II, the population declined and only two knife workshops survived. It was not until 1985, that a group of enthusiasts came together to save and to boost production of the knife.

A major workshop was opened, the Forge de Laguiole, given extra prestige by its building which is topped by a giant blade, and was created by world famous architect and designer, Philippe Starck. It now employs around 300 workers and several other workshops have opened in the village.

“The story does not finish there,” says Séverine Dijols-Valenq. “This autumn we are hoping that the Laguiole knife will be awarded an IGP (protected geographical indication), so that anyone buying one with the label will be assured it is one from Laguiole. Sadly, when the first ones were invented, nobody thought of applying a patent to the design. This means anyone in the world can call their knife a Laguiole, but at least with the label, they will know it comes from our village and not from China.”

The village is also famous for its cheese of the same name, made from the milk of the Aubrac cattle and awarded a Protected Designation of Origin (AOP in French) in 1971. The Laguiole cheese, which is in the same family as Cantal, comes in 45 kilo forms and has to be matured for at least four months, going up to 18 months for a stronger taste:

“In our village, there is no unemployment. We attract tourists but Laguiole is not a museum, and we are proud to be able to live by our traditions.”

The name Laguiole comes from gleisola, meaning little church in the local Occitan dialect. And in the village, the G is not hard, and the name is pronounced Layole. www.aubrac-laguiole.

Who still has to pay the taxe d’habitation in France in 2022?
22 January 2022
More from Explore France
More from Connexion
Get news, views and information from France
Join the newsletter
Subscribe to The Connexion