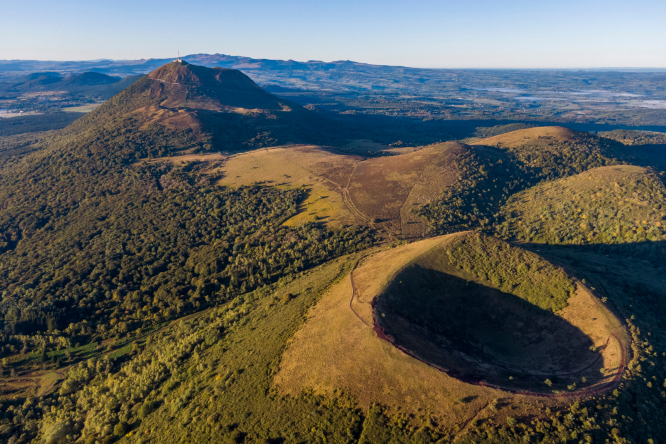 The rural Massif Central, including Auvergne’s volcanic remnants, is something of a hidden gem in France Pic: IURII BURIAK / Shutterstock

Taking to the hills can be a massive breath of fresh air; just what’s needed as the days begin to draw in. The main mountain ranges are the Alps, the Pyrenees, the Jura, Vosges, and the Massif Central. All have their own charms. Hiking, climbing, cycling are all popular sports, but the towns and villages dotted around the hills are also worth visiting.

The Vosges: Packed with fairy-tale towns and villages

The Vosges run north to south roughly defining the French/German border, and are packed with fairy-tale towns and villages. Enchanted Colmar, with its cobbled streets and half-timbered buildings, is not just picture-perfect but is also an important cultural centre. The Musée Unterlinden is unmissable; this year their Yan Pei-Ming temporary exhibition has been extended until October 11th, if you like this contemporary Chinese painter.

The star of their permanent display is the sculpted, painted Isenheim Altarpiece dating back to 1512. The museum also has works by Monet and Picasso. Kids will prefer the Musée du Jouet, especially the train sets.

In spring and summer the town is filled with flowers but even in the autumn, it is full of vibrant colour. A simple stroll around the town delights the eye. Look out for their Statue of Liberty, and do not miss the House of Heads. From ‘Little Venice’ you can take a boat trip round the canals, and there are plenty of wine tours available to discover the best of Alsace wine-making.

Colmar is surrounded by some of France’s most beautiful villages. Riquewihr looks like a drawing in a child’s storybook, and is filled with half-timbered houses, peaceful squares and fountains. Stroll down the main street, Rue Généralde- Gaulle, to the Dolder Gate Tower built in 1291, which now houses a museum. There are lots of cafés and restaurants to choose from, even out of the high season.

Another beautiful place to visit is Ribeauvillé, which holds its annual Festival de Musique Ancienne (Medieval, Renaissance and Baroque music) from mid-September into the following month.

Kaysersberg is another fabulous town to visit. Climb the tower of the ruined chateau for grand views of the cobbled streets and drop by the diminutive but free Musée Historique de Kaysersberg which has a nice collection of paintings, furniture and wooden sculptures.

The Jura mountain range continues the journey south, running approximately parallel with the Swiss border. One of the best places to visit is the charming city of Besançon, with its medieval centre built around a loop in the Doubs river. It is particularly good to visit in bad weather as it has so many great museums.

The top attraction is La Citadelle de Besançon, which is a Unesco World Heritage site. (Take the bus up the hill unless you’re feeling very fit.) The Citadelle is larger than it looks from outside and some parts of it are free. The Musée de la Résistance et de la Déportation is closed for refurbishment, but the Musée Comtois is open. The views from the ramparts are really spectacular.

Besançon was once at the centre of fine clock-making in Europe and the traces aren’t hard to track. Visit the Horloge Astronomique in the cathedral, and try to time it for 12 noon or 3pm when you can see it all moving. It keeps time of absolutely everything including hours, minutes, seconds, leap years, moon cycles, and tides. On the same theme, the Musée du Temps et Palais Granvelle has a good collection of watches and clocks, as well as some fine paintings to take the time to admire.

The house where Victor Hugo was born is now a museum and contains many letters and photographs as well as a first edition of Les Misérables. As if that weren’t enough, the Musée des Beaux-Arts et d’Archéologie is excellent, containing works by Tintoretto, Rubens, Goya, Courbet, Bonnard and Picasso. Entrance is free on Sundays.

At the southern tip of the Jura, northeast of Lyon, is the beautiful village of Pérouges, perched on the hillside. Walk through the arch into the cobblestone lanes lined with half-timbered houses and it feels like stepping back a couple of centuries. It is no surprise that the village has often been used as a film location. The Musée du Vieux Pérouges contains furniture, cookware and other household items illustrating the history of the village and surrounds.

The Alps: Still hidden corners to be found

The Alps need no introduction; curving along the French/Italian border down to the Mediterranean Sea, they are best known for their ski resorts, but are increasingly popular at other times of the year. If you travel by train, you will probably arrive in Chambéry, which has rail connections to Italy. It also has a notable train museum in the shape of the Unesco Heritage Listed La Rotonda just behind the station. Built by Gustave Eiffel in 1906, the massive glass dome (110 metres in diameter) shelters up to 72 trains on 36 lanes of track.

The capital of the Savoie region, Chambéry is worth exploring in its own right. Strolling around the city centre, you can’t miss the striking Fontaine des Eléphants built in 1838 to honour Benoît de Boigne, who made his fortune in India. You cannot miss the Château des Ducs de Savoie either, as it dominates the city – but only a tiny part is currently open to the public, so if you are in the mood for history, check out the Les Charmettes, where philosopher Jean- Jacques Rousseau lived. It is quite a hike up the hill but weather permitting, the views are good. The house itself is very simple and it won’t take long to go round it, but it does provide a glimpse into traditional Savoyard life.

Children as young as three years-old love the Galerie Eurêka science museum in the basement of the library in Carré Curial. Entrance is free, and many of the displays are interactive. It doesn’t even matter whether children speak French, they will enjoy the permanent exhibition about mountains as well as the revolving temporary exhibitions.

Another favourite is the Natural History Museum, which has a stuffed pangolin, in case you’ve ever wondered what one actually looks like. Run by volunteers, it has a slightly surreal Harry Potter-ish vibe which children will love, along with the extensive collections of butterflies, mammals, insects, and reptiles plus the garden containing scented plants.

The Pyrenees run along the French/ Spanish border from west to east, offering a multitude of leisure activities and sports as well as some stately spa towns. Pau, overlooking the Gave de Pau valley, has an esplanade reminiscent of a fashionable 19th century resort: the Boulevard de Pyrénées. The best part of a kilometre long, it only has buildings on one side, leaving the stunning view unobstructed. The construction was suggested by Napoléon and in clear weather it is possible to see all the way from the Pic du Midi de Bigorre to the Pic d’Anie.

There is a cable car down to the railway station, and at the bottom you can’t miss the race track that winds its way through the entire town centre. This is used for two annual car races in May: the Grand Prix and the Historic Grand Prix.

This gives a clue to the city’s modern soul; Pau is resolutely sporty. Car racing, horse racing, marathons, parachuting, flying, it’s all happening here. There is a trampoline park, a gruelling annual running race for women, a Stade Nautique with a stainless steel swimming pool, kayaking, accrobranche (ropes in the tree tops) and mountain biking.

Due to the calm winds and clear skies, Pau is a centre for parachuting and you can find out more at the slightly eccentric Musée Mémorial des Parachutistes, just out of the centre, which is run by volunteers, many of them ex-military. If you are into finding out all the details of which harness was used to jump out of which plane, this is for you – especially if you can speak French.

The chateau in the centre of town is well-maintained and fully-furnished, making it well-worth seeing.

Originally built in the 12th century, it was the birthplace of Henri IV of France, and the giant turtle shell which was allegedly his cradle is on display. There is a fabulous collection of tapestries. After the Revolution, a restoration of the chateau was begun in 1838, and after several long pauses, completed in 1870.

The Massif Central is perhaps the least well-known of France’s major mountain ranges, and yet it includes no less than 11 sprawling national parks. Activities include horse riding, hill-walking and of course walking with a donkey à la Robert Louis Stevenson.

One of the nicest places to visit in the Cévennes is Millau, famous for its viaduct. When the plans to bypass Millau were first unveiled, there was an outcry against the idea; people were afraid that the town would be abandoned by tourists who would speed south over the bridge without stopping.

The opposite has happened; Millau has flourished. Tourists are more attracted to the town now that it is not incessantly clogged with traffic jams, and its Friday morning market is massive.

The traditional sheep farmers set up stalls selling cheese and sheepskins, and the walled historical centre is crammed with stalls selling everything from cheap saucepans to expensive linen. There is a particularly good stall selling Greek food too. Definitely try the stuffed aubergines.

The viaduc has even become a tourist attraction in its own right.

There is a visitor centre in the Aire du Viaduc (accessible from the A75 or via the D911 from Millau) which has a permanent exhibition of how the viaduc was designed and built. There is also a viewing platform where you can take photos of the viaduct, even if you do not want to pay to drive over it.

The centre also has snacks, tourist information and a shop. If it is a nice day, look up – you will often see people paragliding over the city.

Truffle season starts in France with quantity down but quality up
1 December 2021
More from Explore France
More from Connexion
Get news, views and information from France
Join the newsletter
Subscribe to The Connexion