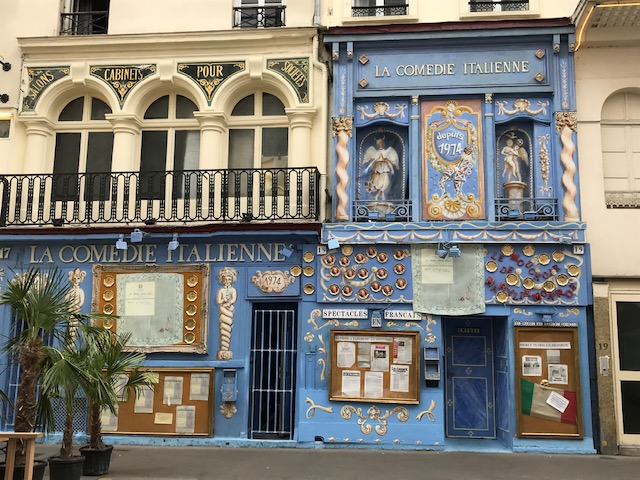 The unique story of the French theatre whose debts have been covered thanks to a piece of memorabilia from the late Marilyn Monroe.
By Joanna York

The steats in the Comédie-Italienne theatre spent the summer shrouded in plastic, unused by audiences for weeks on end because of the health crisis. Like all other venues across France, the theatre, in Paris’s 14th arrondissement, has been shuttered since the start of the Covid-19 pandemic in March.

Unlike other independent theatres struggling under the weight of missed financial deadlines, however, the Comédie-Italienne has recently seen its €300,000 debt erased, thanks to the sale of an unusual talisman: a handkerchief that belonged to Marilyn Monroe.

50 years of entertainment at the Comédie-Italienne theatre

The theatre, which puts on traditional Italian commedia dell’arte performances using baroque masks, had been in debt after almost 50 years of existence. Co-founder and director of the theatre Attilio Maggiulli puts the financial problems down to the difficulty of running an independent theatre.

With no more than 100 seats, and each performance normally involving around 10 actors, as well as eight box office staff and ushers, he said it was “very, very difficult to financially support ourselves”. As well as ticket sales, funds come from courses run by Mr Maggiulli in commedia dell’arte acting – something that is no longer done anywhere else in the world, “even in Italy”, according to the director.

However, finances are still tight. In 1999, he went on hunger strike to protest against crippling taxes and a lack of government support for his unique cultural enterprise. He said the theatre has received no support from the government for the past six years, because – he believed – of his tendency to stage plays that comment on modern-day French politics. “I’m not very diplomatic,” he admitted. In the face of the Covid-19 pandemic, financial salvation came from an unlikely source.

A gift from Marilyn Monroe

Mr Maggiulli and his theatre have had a unique link to Monroe since he was given the handkerchief in 1970 as a gift “to bring him luck”. At the time, the director was living in New York, and the giver was a friend, the renowned art dealer and gallery owner Leo Castelli. Mr Castelli was given the handkerchief by an artist he had patronised early in his career, a certain Andy Warhol, who had in turn got it from a concierge at the Waldorf Astoria hotel in New York.

The concierge found the handkerchief stored in the prestigious hotel. It was attached to a business card that revealed Monroe had left it in a hotel bathroom in 1960, two years before her death, aged 36. Mr Maggiulli kept the “miraculous object” for 50 years, eventually putting it on display in the foyer of the Comédie-Italienne theatre, which he founded in 1974 with his wife, actress Hélène Lestrade.

Over the years, the handkerchief bore witness to the comings and goings of theatrical luminaries such as Irish playwright Samuel Beckett who, Mr Maggiulli says, came to learn techniques for using masks in performance. “Even though he said he hated them, he wanted to understand how they worked.”

Other famous faces and regulars at the theatre

Another regular visitor was Swedish actress Ingrid Bergman, who at the time was married to Lars Schmidt – director at the nearby Théâtre Montparnasse. “Every time she was passing, she’d stop to say ‘Come va?’” – “how are you?” in Italian.

Mr Maggiulli said the actress spoke his mother tongue as she had previously been married to Italian film director Roberto Rossellini. “She’d always stop, sit down, because she was very old by then, and talk. Sometimes she helped with our courses too.” The handkerchief rarely left the theatre, but Mr Maggiulli took it with him on a visit to Iraq in 2003 and credits the lucky object with saving his life. He was visiting Baghdad in the middle of the war to work with the Iraqi national theatre, which had been closed down by American forces.

While there, he was captured by American contractors and imprisoned. He became worried, he said, when one of his captors found out he had previously put on a controversial anti-war play in Paris, called George W Bush, or God’s Sad Cowboy, which had led to him being attacked in his theatre by four men. The Americans in Iraq “thought I was a spy”, he said.

While in prison, all of his possessions were taken from him, but one of his captors saw the handkerchief and asked him what it was. “I told the whole story about Leo Castelli and Andy Warhol. He said "You’re crazy. What a crazy story’.” The American later said he would help Mr Maggiulli leave the country and fly to Amman, in Jordan, on condition that he couldn’t take any of his possessions with him. The director agreed to leave everything, including his passport, “but not the handkerchief”.

“[The American] looked at me and said, ‘okay, not the handkerchief’,” Mr Maggiulli said. He escaped, with his lucky charm, back to Paris. So was it a difficult decision to part with Marilyn’s handkerchief, after 50 years and a near-death experience? Surprisingly, he said, it wasn’t.

Once the decision had been made, the theatre contacted its network of fans and supporters to let them know they were organising an online auction. They hoped the historic item would help to partially relieve their debt, and had received offers up to €45,000.

Then, he said: “One day a man called, and asked us what the amount of our debts was. We said the Comédie-Italienne had debts of €300,000, and he wrote a cheque for €300,000.” The winning bidder wished to remain anonymous, but told Mr Maggiulli that, although it had been sold, the handkerchief (right) would always belong to the director. The new owner said he saw himself as “just a custodian”.

Now the theatre finds itself “having no debts, but no money either”. Although, Mr Maggiulli acknowledges, this puts them in a better position that many other independent theatres, which will also have lost money and gone deeper into debt during confinement in France. For them, he thinks the coronavirus epidemic and its economic fallout “could be catastrophic. They didn’t have a handkerchief”. “I wish them a lot of courage,” he said.

The future of theatres in France

Looking to the future for theatres in France, he believes “it’s going to be complicated, even for big theatres” to survive if social distancing measures stay in place. He is also not convinced it would be possible for audiences or actors to interact with each other, and get the most out of performances, if they are forced to wear protective masks while inside theatres.

The Comédie-Italienne plans to reopen in September and Mr Maggiulli is calling once again on the spirit of Marilyn Monroe to bring him luck. Rehearsals are under way in the theatre for a run of Le mouchoir de Marilyn Monroe (Marilyn’s Handkerchief) by Fabio Fabi, performed by actresses Hélène Lestrade and Valentina Vandelli. It tells the story of an old woman, whose life bears a striking resemblance to that of Marilyn Monroe.

As she reminisces, prompted by her Sicilian granddaughter’s questions, the audience start to question whether the elderly lady could, in fact, be the late American star. Although the play does not make use of the theatre’s signature masks, it will feature a guest star – Marilyn Monroe’s handkerchief.

The anonymous buyer has agreed to lend the theatre their lucky talisman for as many performances as they need it. “Theatre is about dreaming,” Mr Maggiulli said. “And as soon as you have a project in mind, they always end up becoming a reality somehow, with or without money. That’s how we’ve always worked. We’ve always believed that it’s possible to do things. It’s a great pleasure for us to put on this play. For us, it’s a new start. It feels like when we started 47 years ago. And Marilyn Monroe is still here, with us.” The play is due to open on September 23.