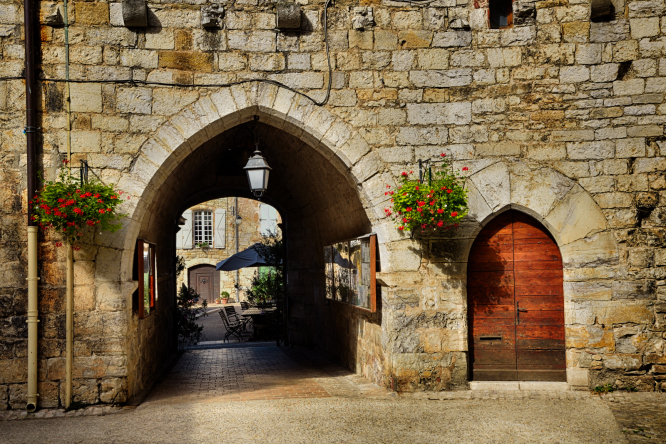 The attractive town of Martel is known as the city of seven towers Pic: MilaCroft / Shutterstock

Henri Court-Mantel, so called in French, because of the short clothes he wore, was the eldest son of Henry II of England and Eleanor of Aquitaine, at a period when the English monarch ruled over much of the south west of France. In English, he was called Henry the Young King, as he was crowned during his father’s reign, but he was never allowed to rule.

He fell out with his father, and began a rebellion against him and his brother, Richard the Lionheart.

Martel’s official town guide, Brigitte Vidieu, says his downfall came when he vandalised and pillaged the sanctuary of Rocamadour:

“This was in revenge against his father, as Henry II had made pilgrimages there and given valuable treasures. As Henri Court-Mantel left, legend has it that the bell rang out, as a sign from God. The rebellious son fell ill and took refuge in Martel.”

It is said he asked for forgiveness. His father sent a messenger with his pardon, who found him lying on a bed of cinders as an act of penitence with a heavy wooden cross on his chest.

He died on June 11, 1183, aged 28 in Maison Fabri. There is a commemorative plaque on the house and a rampant leopard from the English coat of arms at the top of its tower.

Martel is called the city of the seven towers, even though there are more than that: “In the middle ages Martel was ruled by the Viscount of Turenne. It was wealthy, as it was on an important trading route for salt. The precious commodity was brought up the river Dordogne from the Atlantic to the port of Souillac, and then transported to Martel.

“In the 13th century the rich merchants built towers as a sign of their new-found wealth. One day, the Viscount of Turenne visited the town, and impressed by the towers, named seven of them after each of his children.”

By the seventeenth century, Mrs Vidieu says there were fewer merchants, as they had encouraged their children to pursue other professional careers, such as the law, which gave them a higher standing in society, but less wealth, and Souillac began to sell as well as import salt.

It was always an area rich in truffles and when the train arrived in the 19th century, Martel, once again profited from flourishing trade, as it could now sell its” black diamonds”, throughout France: “This ended with World War I when locals did not have time to look after their truffle plantations. In the 1980s, an experimental truffle station was created nearby and now this valuable local culture is once again exploited successfully.”

Another crop, which is also coming back into fashion, is lavender:

“At the beginning of the 20th century, lavender, which grows easily in this area, was in high demand for the developing soap industry. Martel was unusual because in the 1920s it had its own distillery and was the local lavender capital.

As soap became industrialised, demand faded, but this year Martel celebrated its third lavender festival and there are an increasing number of producers setting up in the region.”

Prized Italian white truffle now to be produced in France

Truffle season starts in France with quantity down but quality up
1 December 2021
More from Explore France
More from Connexion
Get news, views and information from France
Join the newsletter
Subscribe to The Connexion